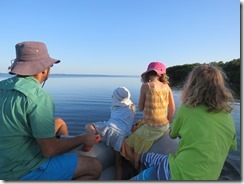 When we arrived at Great Sale Cay in the Abacos the plan was to stay 2-3 nights, get some rest from the previous crossing, enjoy the warm crystal clear waters of the Bahamas and keep on sailing north towards the USA as soon as the next weather window opens. Already after the first night we started having doubts about this plan. Why rush? We want to be back in Switzerland at the earliest around mid July. It was end of April still plenty of time to visit and enjoy the Abacos.

A couple of hours after putting down the anchor we went with our dinghy for a little exploration of the surrounding bay. We did not even put our dinghy engine on but rowed instead. Aiming at a little ruin of what seem to have been a stone dock. On the way we

spotted a couple of big sea turtles, two big rays, a baby shark and a tiny little barracuda. Could ask for a nicer welcome greeting. We landed on the stone dock heading inland hoping to find a path that will lead us to the sandy beach on the western shore of the cay we saw when we arrived by boat a couple of hours ago but with no success. Every little pathway seemed to end in a maze of mangrove trees with no way out. 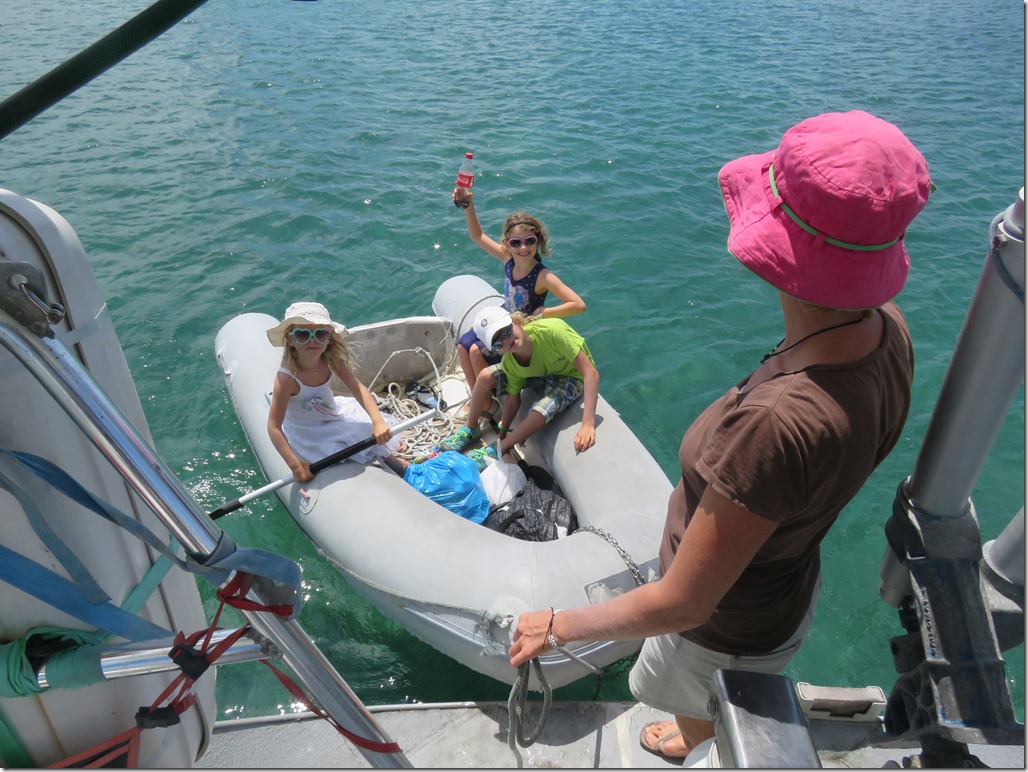 going for a rowing expedition 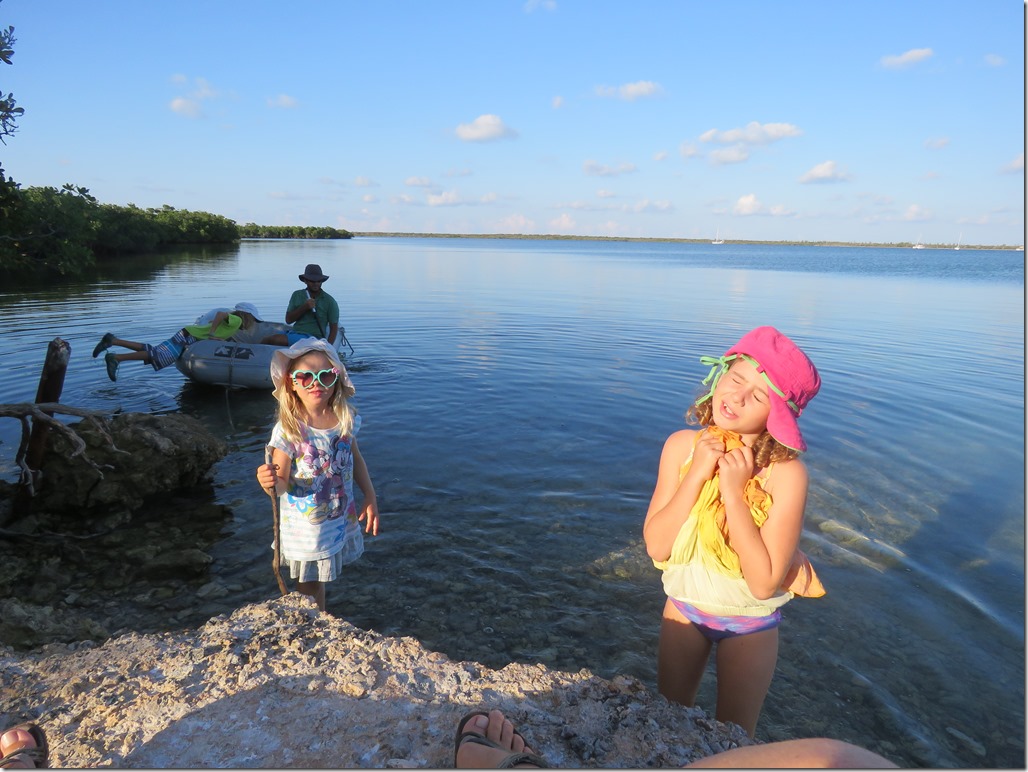 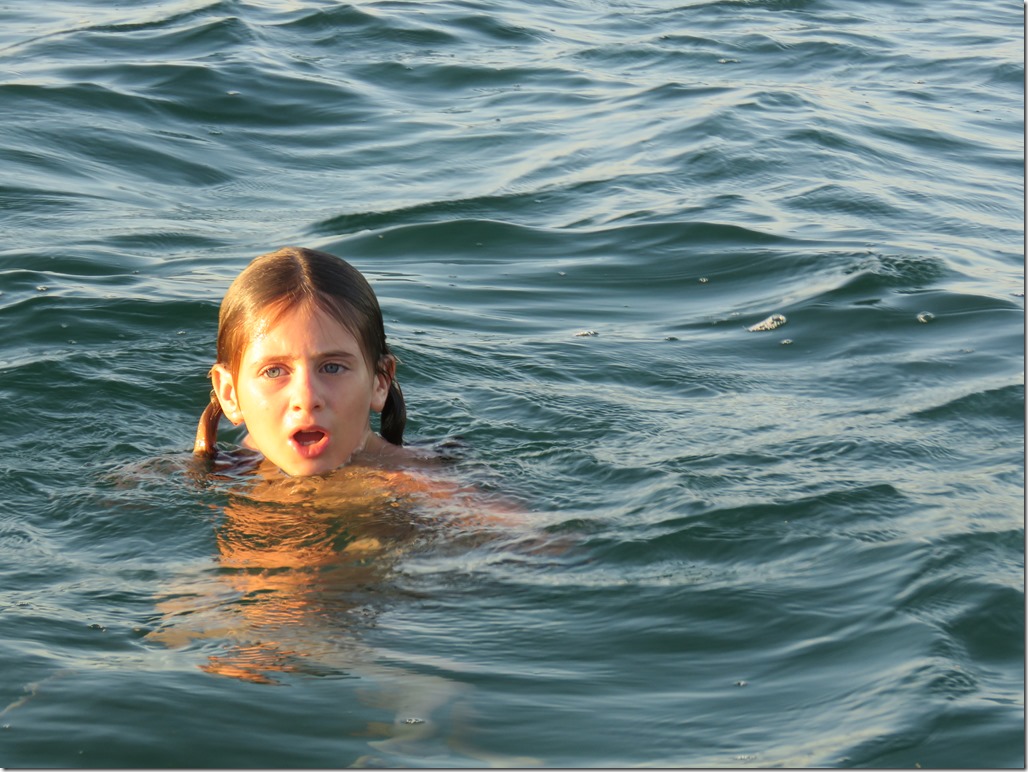 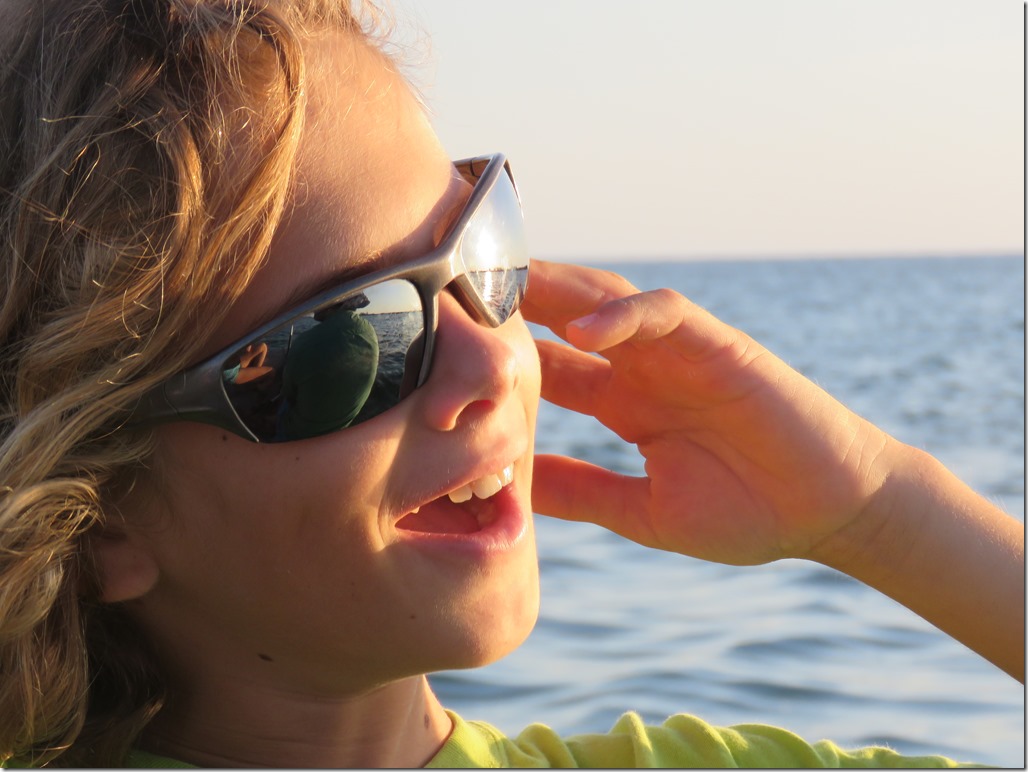 Three days after our arrival in Great Sale Cay the weather seemed promising for a passage north. In the morning we hesitated, shall we go or stay? We decided we go. We prepared the boat, raised the sails, weighed anchor and rounded the southern tip of the cay heading north towards Walker Bay channel that will lead us back into the Atlantic ocean for a 4 days crossing to Beaufort, NC. 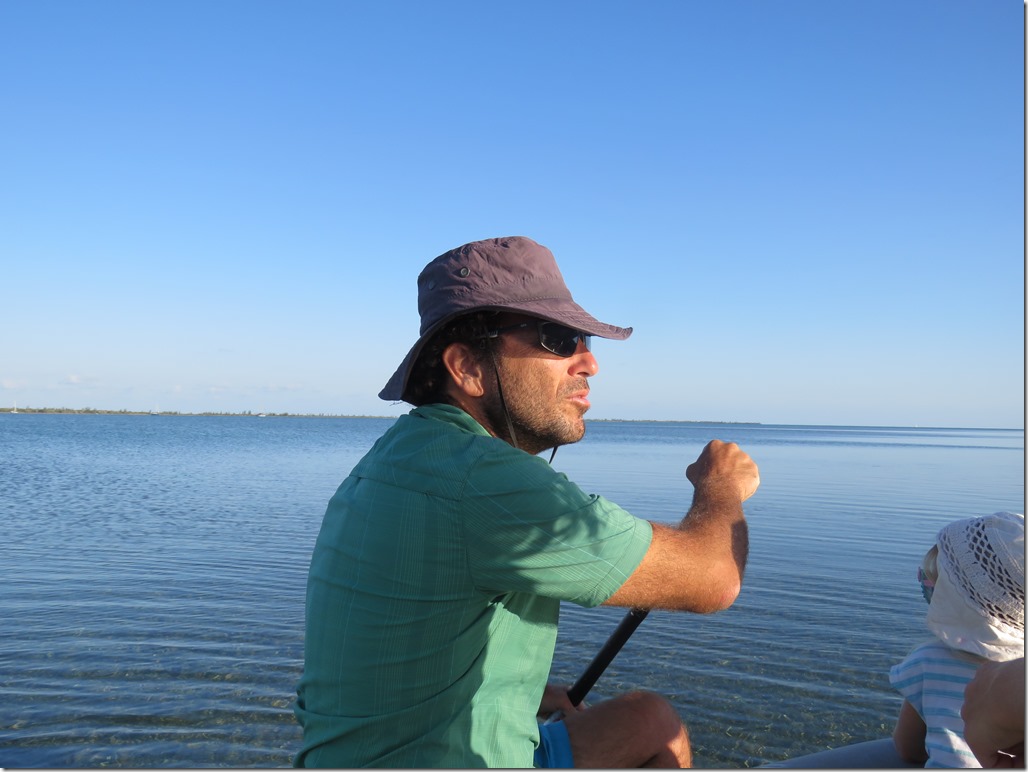 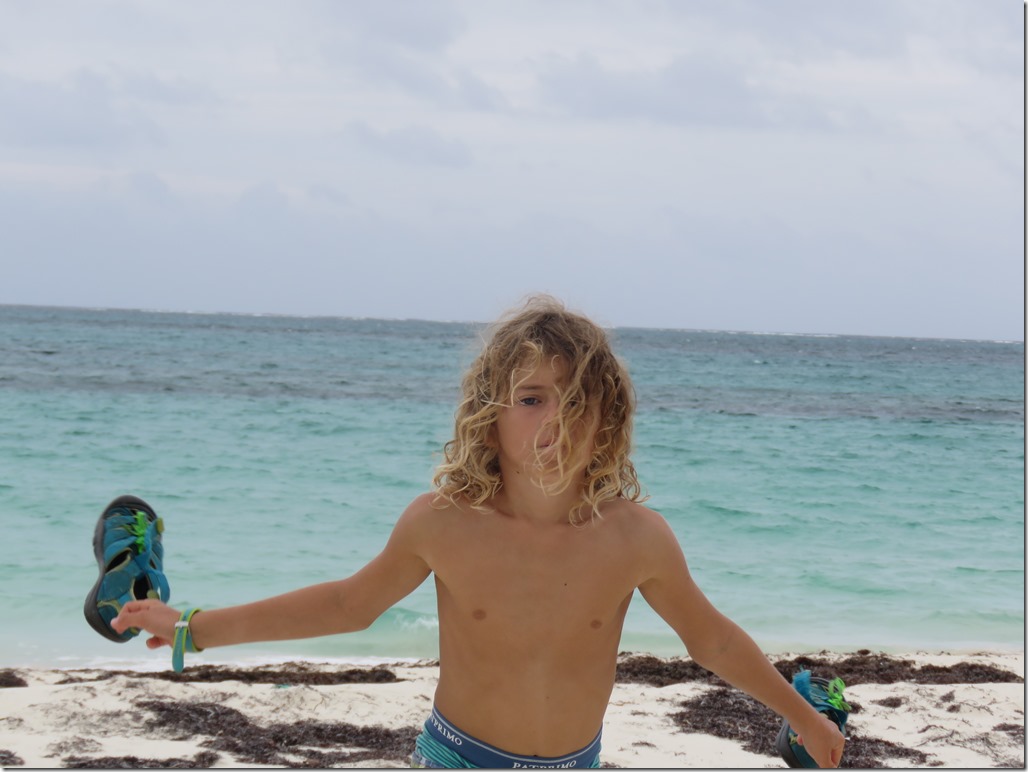 Four hours later I was sitting in a gulf cart next to an immigration officer on our way to his little office at the north end of Grand Cay. As we were sailing northward Adi started crying that she does not want to go for a long passage again. Seeing her sad face together with our initial hesitation made us change our minds and instead of heading out to the big open ocean we entered the protected and narrow channel of Grand Cay. Plenty of paperwork plus 340 USD (!) and we were free to explore the Abacos for another three weeks before heading to the States.

We also forgot how hard and expensive it is to stock up in the Bahamas. The town had 3 little shops with mainly canned and dry food both of which we had enough. What we were after was fresh produce. Luckily we met a nice guy that showed us a little hidden shop in a neighbour’s garage where he had tomatoes, onions, bananas, apples and even oranges. 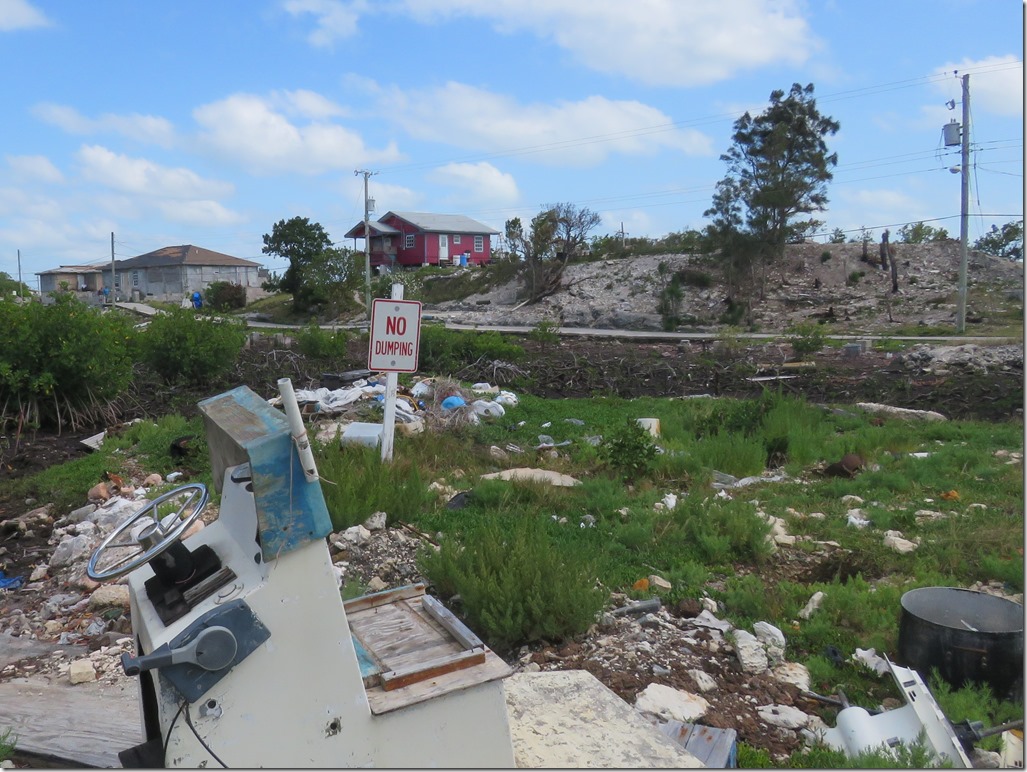 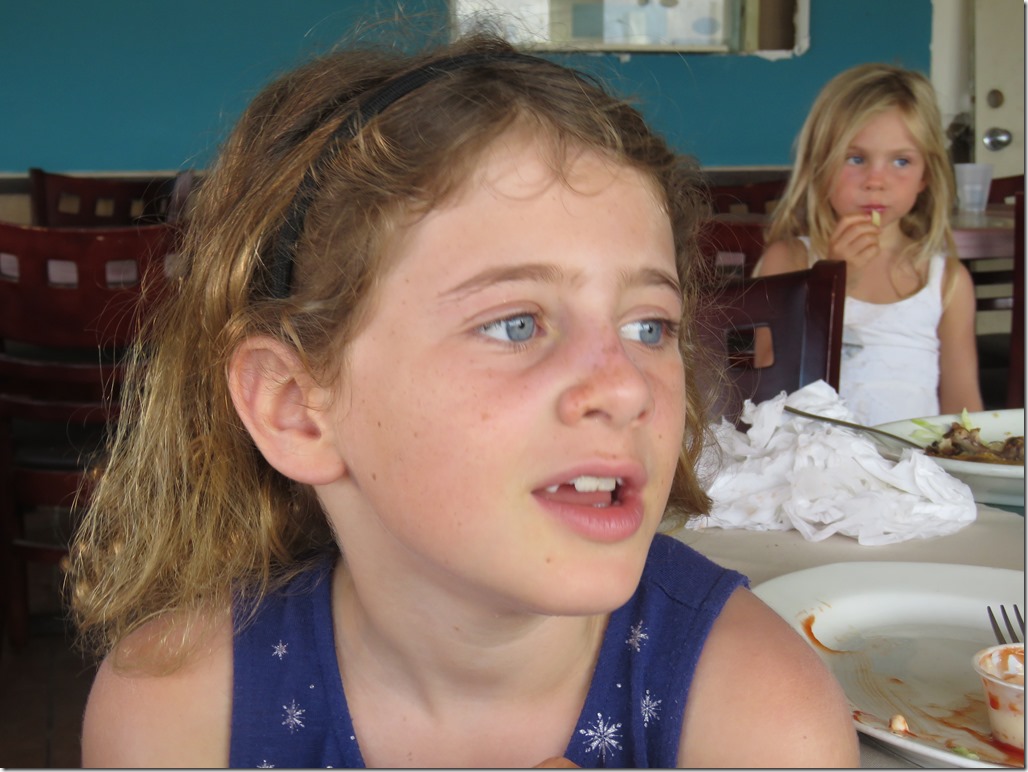 At a little restaurant by the harbour at Grad Cay. The place was actually closed but she agreed to prepare us hamburgers and conch fritters.

One thing we did not take into account was that our excellent weather window for going north meant un-favourite conditions for sailing eastward and south – the direction we had to sail if we wanted to visit the Abacos – Grand Cay being the one before last most north-western cay of the Abacos, Walker cay being the last one. So the following days each time we headed out of our anchorage we found ourselves beating into the wind which blew at 25 to 30 knots. The sailing with one, and more often two, reefs in the main and our jib on the inner stay was thrilling though somewhat too sportive at times. At least the reef protected us from the swell so the waves were not too big and besides, the sun was shinning and the color of the water was amazing like we remembered it last time when we were in the Bahamas. In the evenings we will arrive at beautiful little cays with no one else around but the wind did not leave us even there. And we were looking forward for some calmer days. 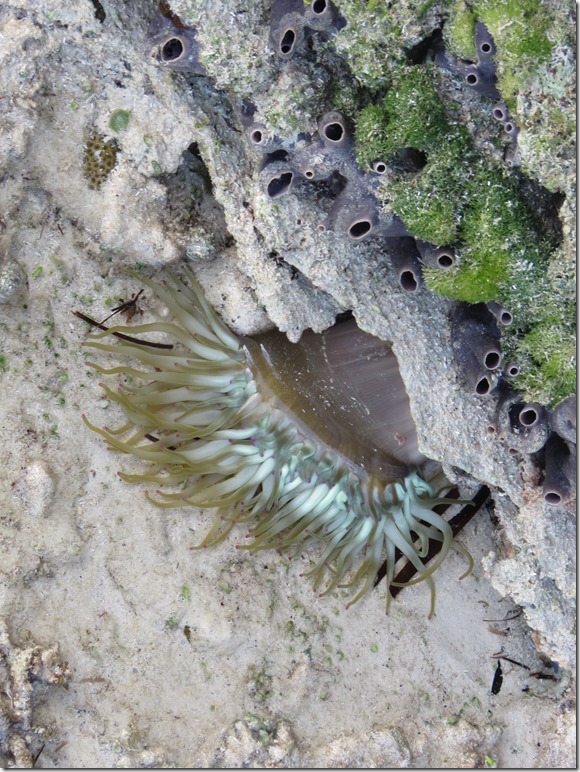 A sea anemone waiting for the tide to come back

But the forecast for the following two days was for more wind – 30 to 35 knots first from the north east than slowly moving to the south east. We had to find a good spot to weather this wind and a look on the chart did not reveal many nearby options with good protection both from the NE and SE. 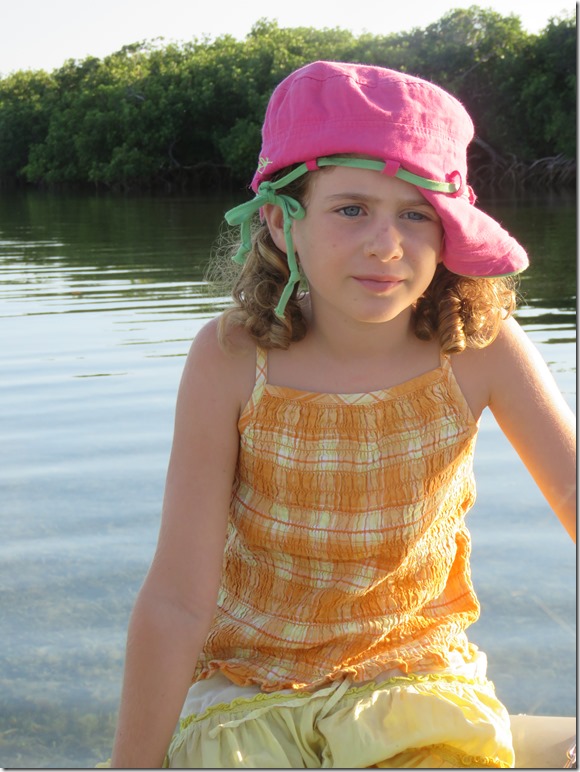 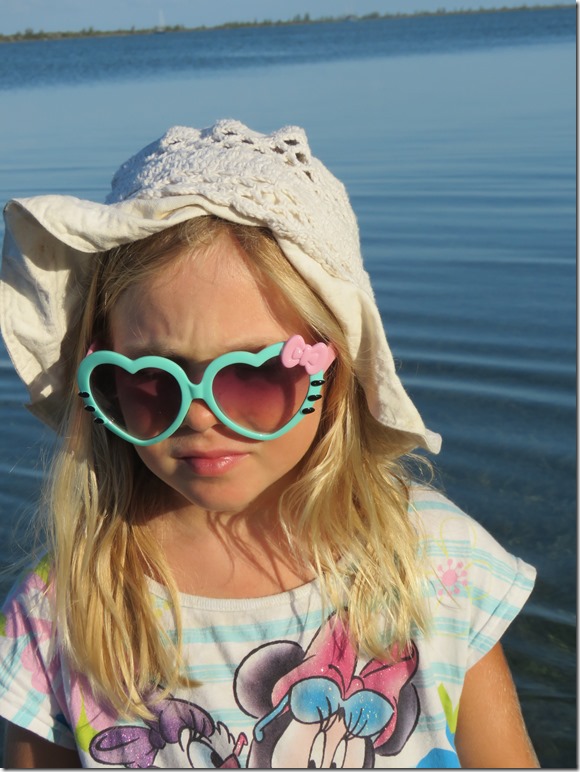 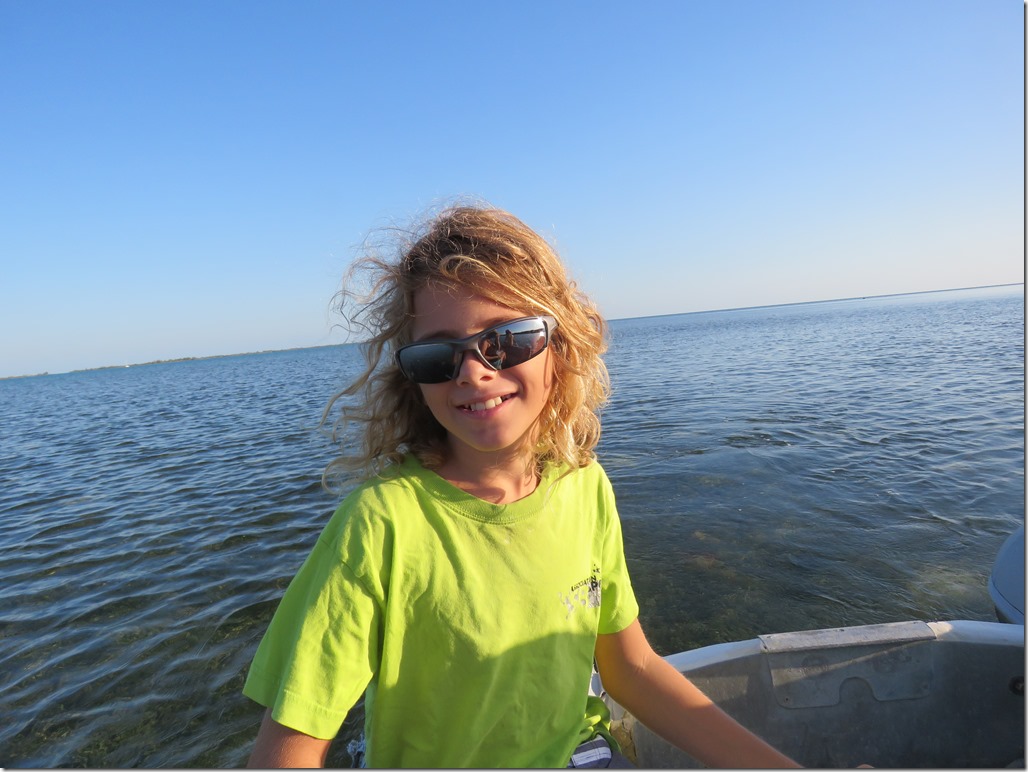 The best anchorage was probably at Angel fish point – the point where big and small Abacos meet and a small bridge connects the two. But it is almost 35 miles away from our current anchorage at the north tip of Strangers Cay and beating against the wind would have meant even a longer trip. Another option was going back to Great Sale Cay but after spending there 3 days we did not feel like spending another three days there especially as the possibilities for going ashore were little. And in addition our fresh produce was running low again and we wanted access to some sort of a supermarket. So we decided on going to Fox town, a small settlement on little Abaco island some 12 miles before Angel Fish point. 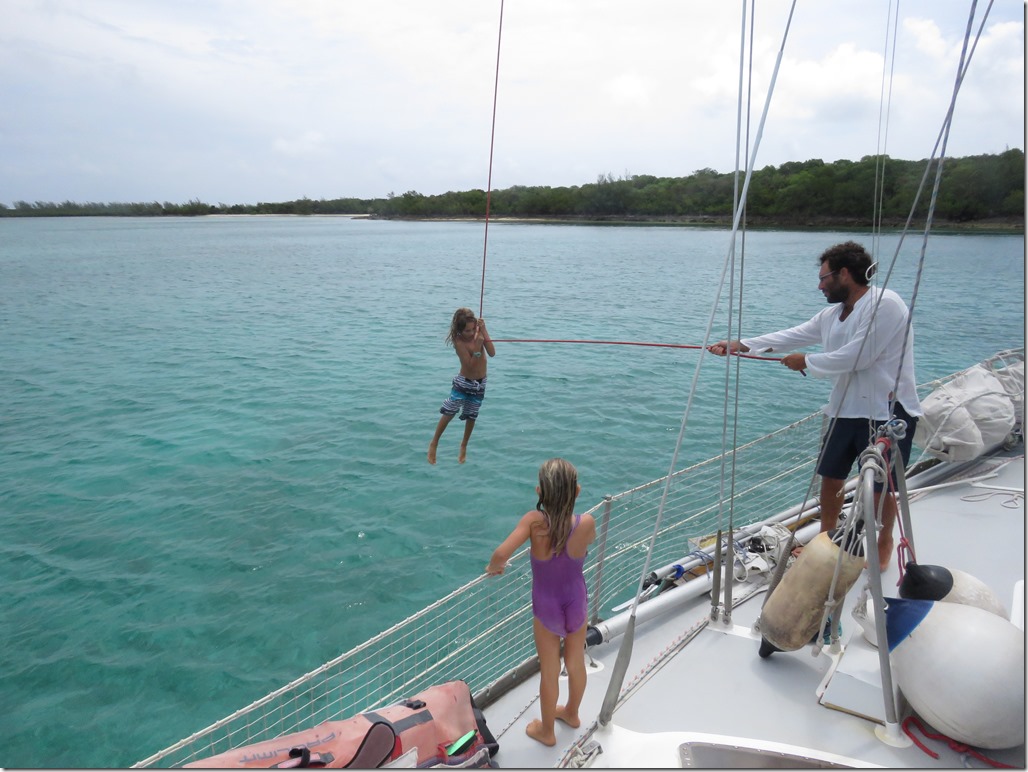 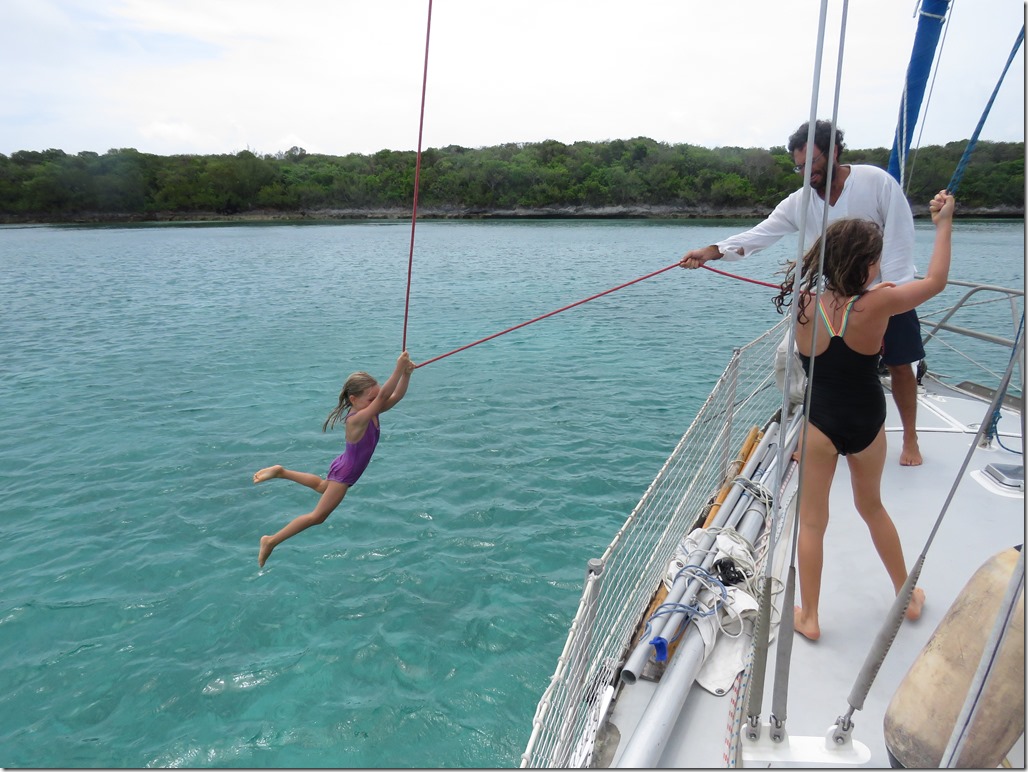 At first look on the chart the anchorage at Fox town did not seem very promising but we planned on hiding below Hawksbill Cay for the first 24 hours to get protection from the NE and as the wind will move to the south-east we will also move closer to town and thus get a good protection from the wind. And this time the plan worked perfectly. 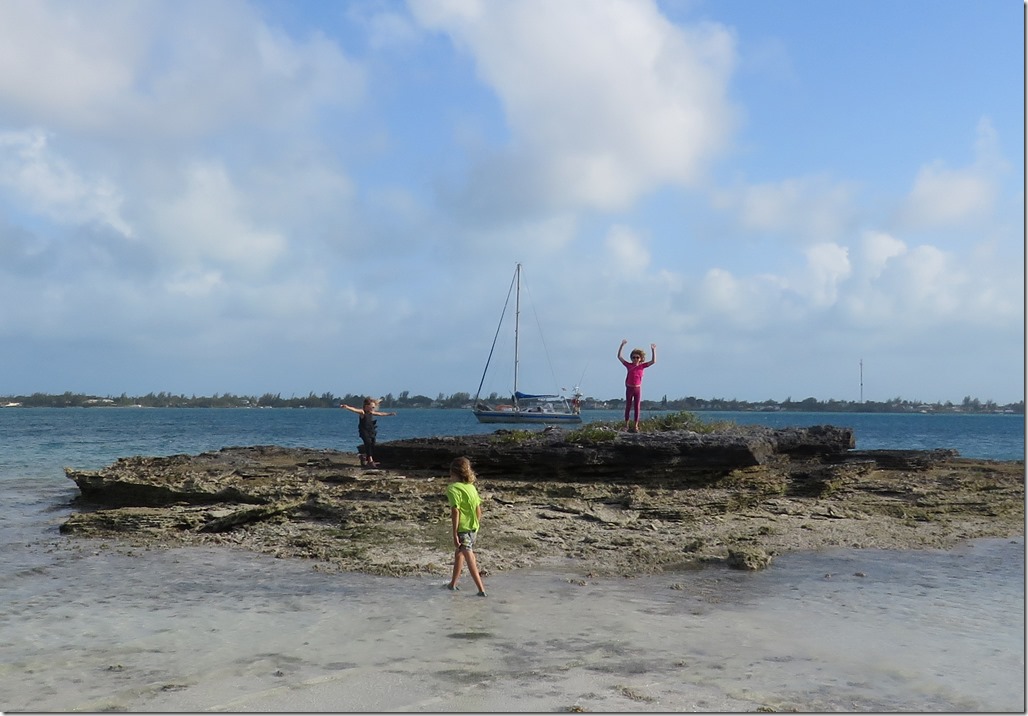 An island for themselves. In the background is Fox Town 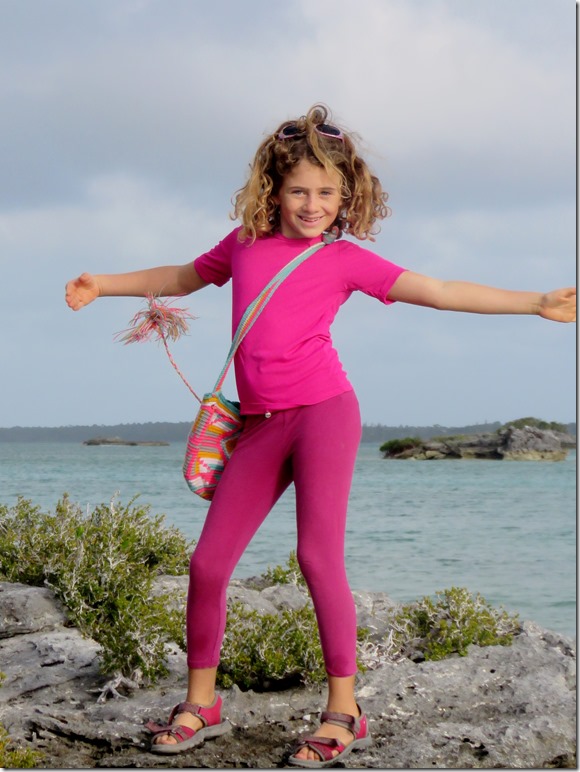 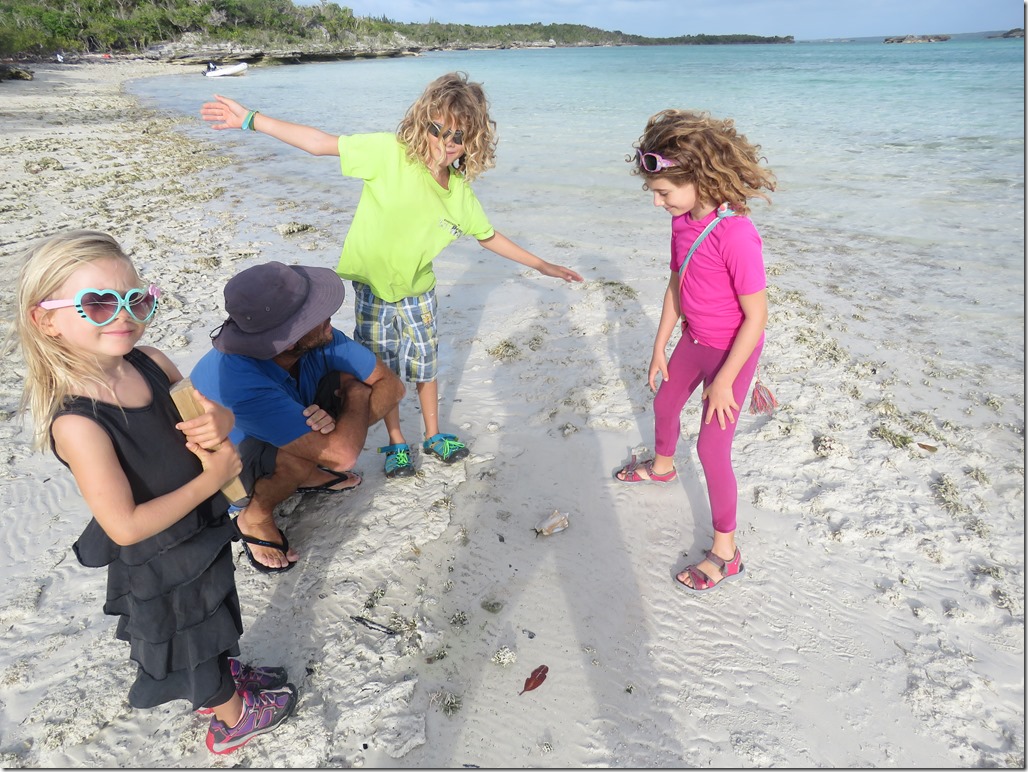 A baby conch walking on the sand

South of Hawksbill cay we managed to get inside almost all the way to the beach and we found ourselves in a beautiful spot surrounded by big rocks with turquoise water and a little beach in front of us. Swimming was out of the question though as it was really blowing that day but we could go on shore where it was calmer and we could go for short walks around the rocky lime stone cay. 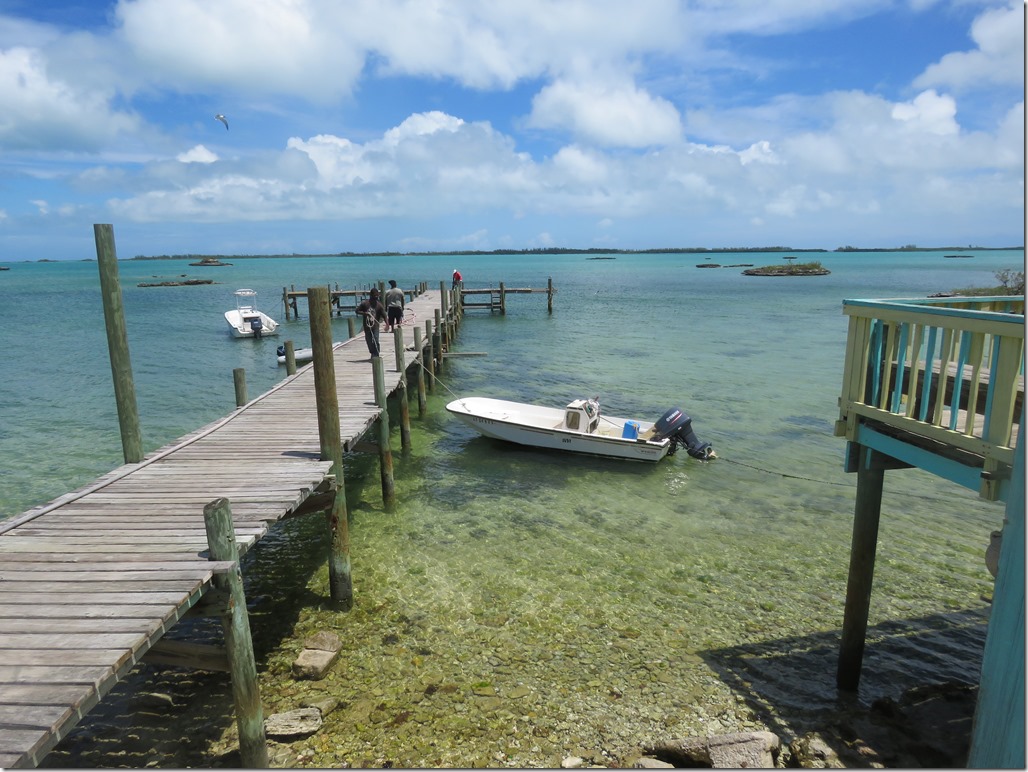 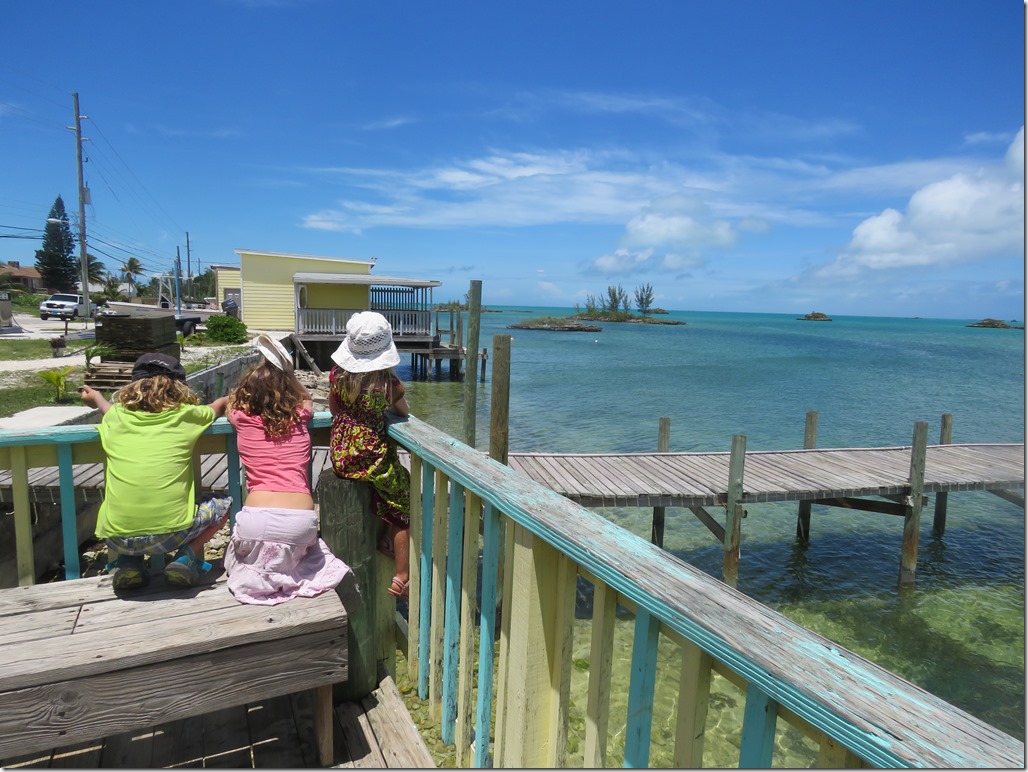 Kids watching for sharks and rays. Like in most Bahamian fishing ports the sharks and the rays, being fed by the fishermen, are a common sight.

The local pub of Fox town. In the distance between the many rocks you can see Nomad waiting us in the calm waters.

The following day early in the afternoon as the wind shifted to the south we moved towards the other shore. It was quite intimidating at first to find a good spot since in order to get close enough to the beach for good protection we had to slalom between big rocks and coral heads but once we found a channel in we were once again anchored in a breath-taking spot and more importantly – with excellent protection from the wind and waves. 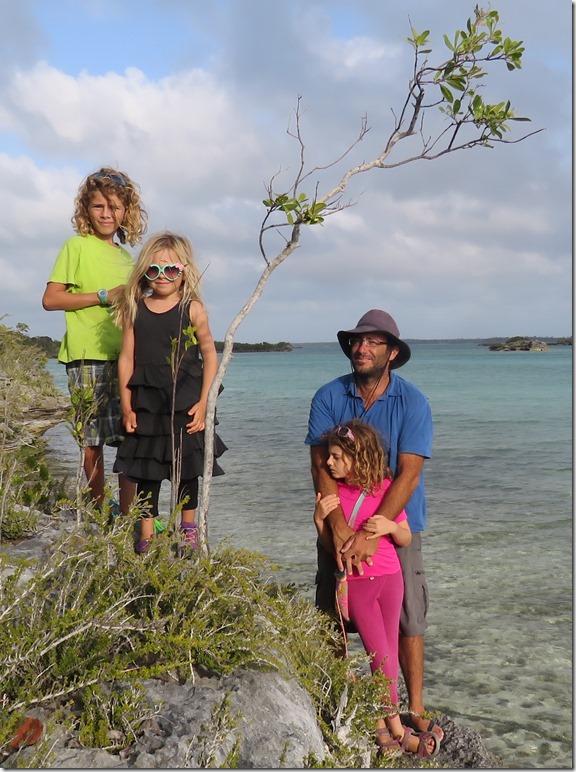 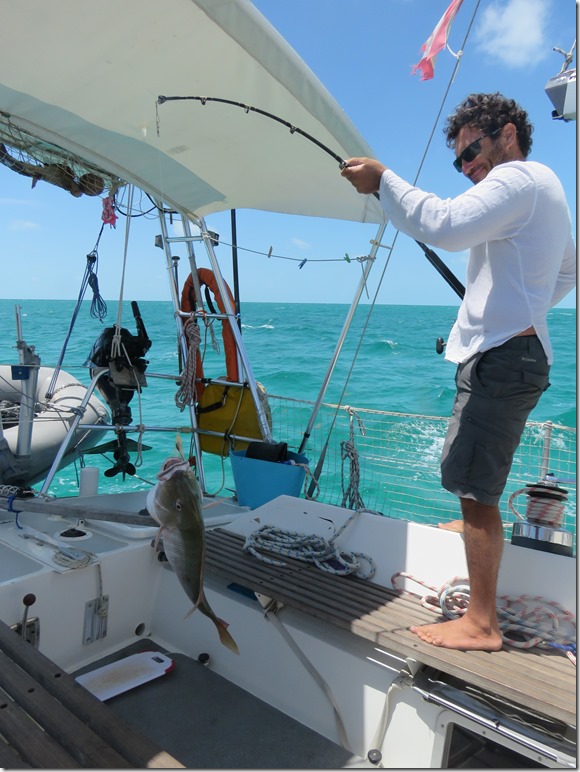 another mouton snapper we caught on our way to Grand Cay

If in our first 3 days in Great Sale Cay we have seen about a dozen of boats coming and going every day whereas in the last days we seemed to have been the only boat crazy enough to sail around these waters. There was no one around, not at the anchorages and not outside sailing. The Bahamians we met were all very welcoming, helpful and curious about us and especially the kids. 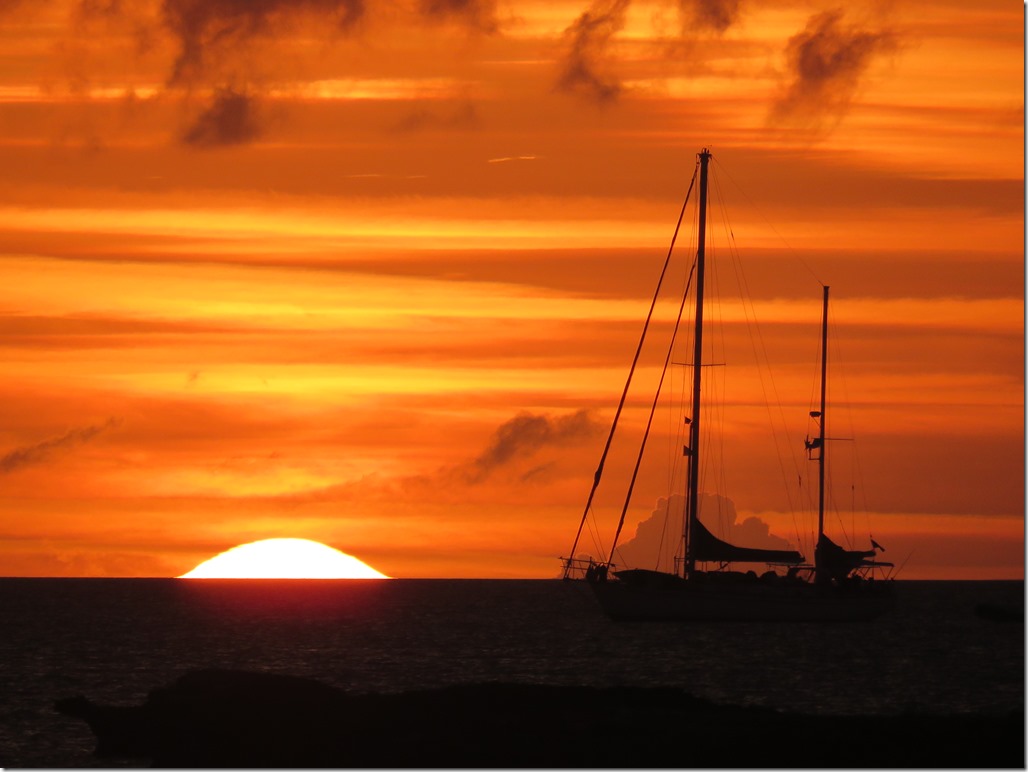 We ran out of propane and wanted to refill our tank but we were told we had to go all the way to Marsh harbour – about an hour by car and two days with the boat. We decided to go by boat and during the next week we had to cook on a little camping stove. Amos was the least content about this situation – he finally learned how to light up our oven and enjoyed very much baking chocolate cakes (which all the crew on Nomad really appreciated) but with no cooking gas there is no oven either.  Anyhow, we also ran out of eggs. And butter. Ah, and no more chocolate either.

We started dreaming again about the big Chedraui supermarket of Isla Mujeres. The next morning we left early heading east than south towards Marsh Harbour. But first, we wanted to stop in Manjack Cay. 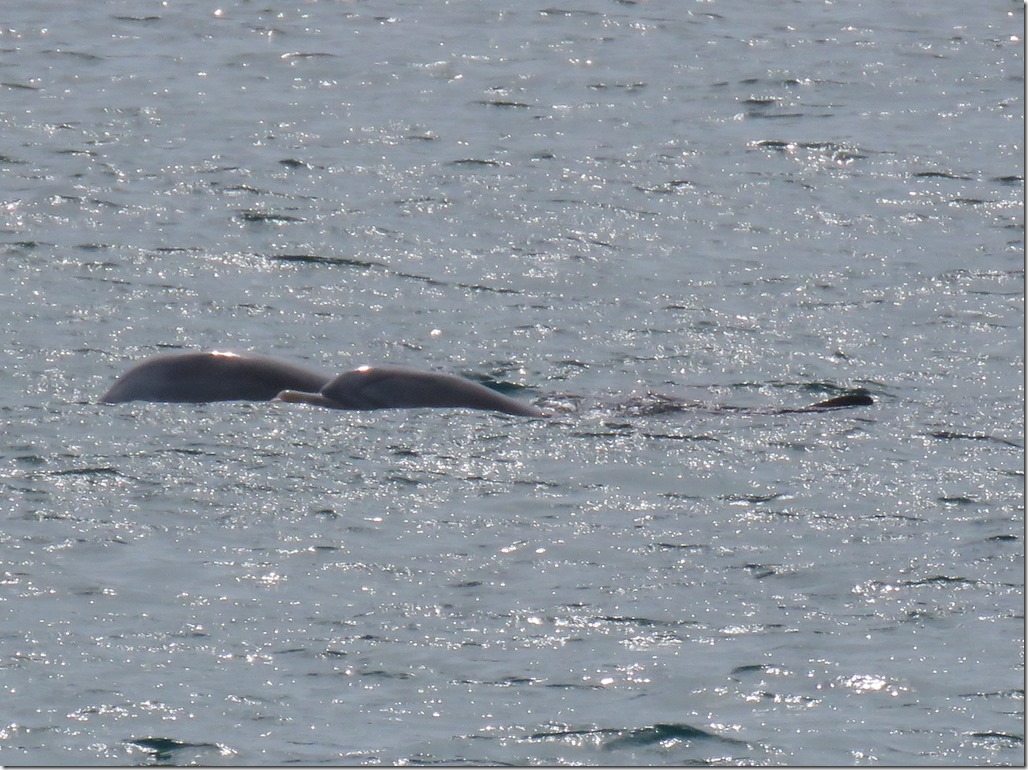