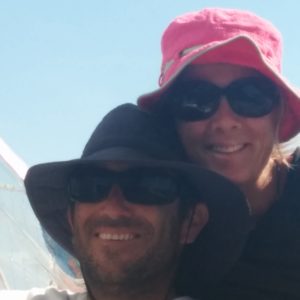 We left Gran Turk at 1540 on the 12th of April. Destination – Puerto Rico, about 350 miles further south east. These are the emails we sent during that crossing.

On The Way To Puerto Rico

We’re back in the atlantic ocean!

In the first 24 hours at sea we made 130 miles towards Puerto Rico. Yesterday and during the last night we had North winds and made good speed with little rolly seas. Today the wind weakened and turned to the north west.The seas are still a little rolly but slowly slowly theyshould get more gentle. The sun shines and the blue ocean is beautiful. We all took showers/baths in the cockpit and everyone feels great (including virginie:-).
To the south, far in the horizon, we can see the high mountains of Hispaniola, the highest in the caribbean (some are more than 3000 meters high). Seeing land so close by and after 3 months where the highest hill we climbed was not more than 50 meters we started to talk of stopping first in Samana, the Dominican Republic. We haven’t made our minds yet since the weather forecast is really good for the following days to keep on going south-east so I think we will push further but we have the whole night to decide.. after all, this is what freedom is all about..
The sun is about to set behind the horizon. We still hope to spot one of those last humpback whales on their way back north after spending the winter here. 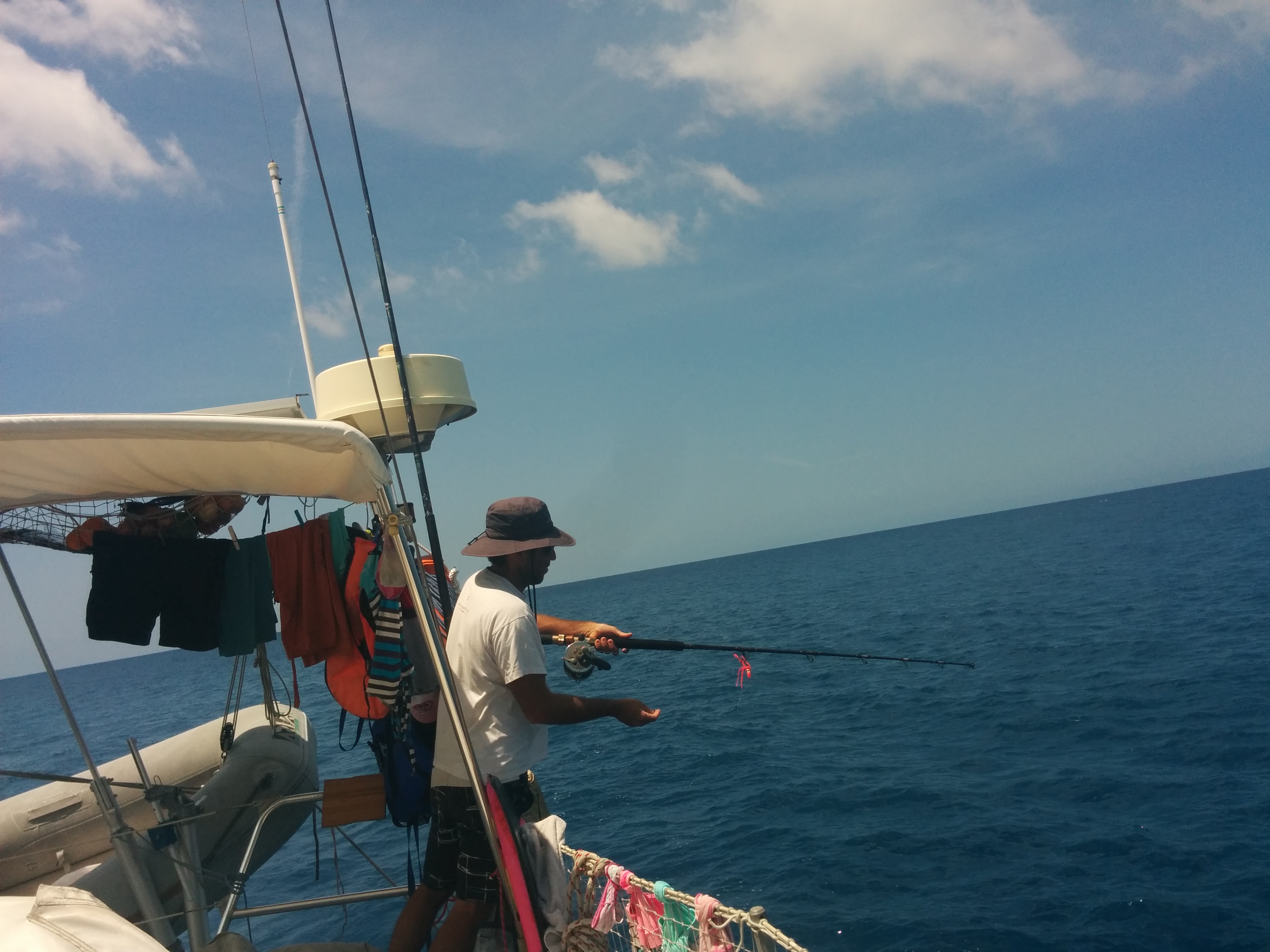 The Dominican Republic will have to wait for some other time. A weather window such as we have this weekend is a rare thing and very precious so we decided to push forward and continue towards Puerto Rico.

The night was very calm. No wind and no waves. Under the big bright moon you could see the Atlantic swell coming from the north like a rolling carpet, raising Nomad high, rocking us a little and than continuing further south. Only the noise of the engine interrupted this beautiful night.
We did manage to do 120 miles in the last 24 hours and we now have another 100 miles or so till Ponce.

With its strong winds, unpredictable currents, shoaling and frequent thunderstorms, the sea section between the Dominican Republic and Puerto Rico, known as the Mona Passage, is considered one of the more complicated and treacherous passages around the Caribbeans. As I write this email we are almost half way through it. The winds are light and Nomad sails east-south-east at 5.5 knots with all our sails up. The forecast for tonight predicts north to north east winds 5 to 10 knots, scattered showers. Perfect.

Apart from a little flying fish that ended up on our deck this morning and 2 big black birds that came close to say hello we haven’t seen any other animals. No fish for our fishing line either 🙁 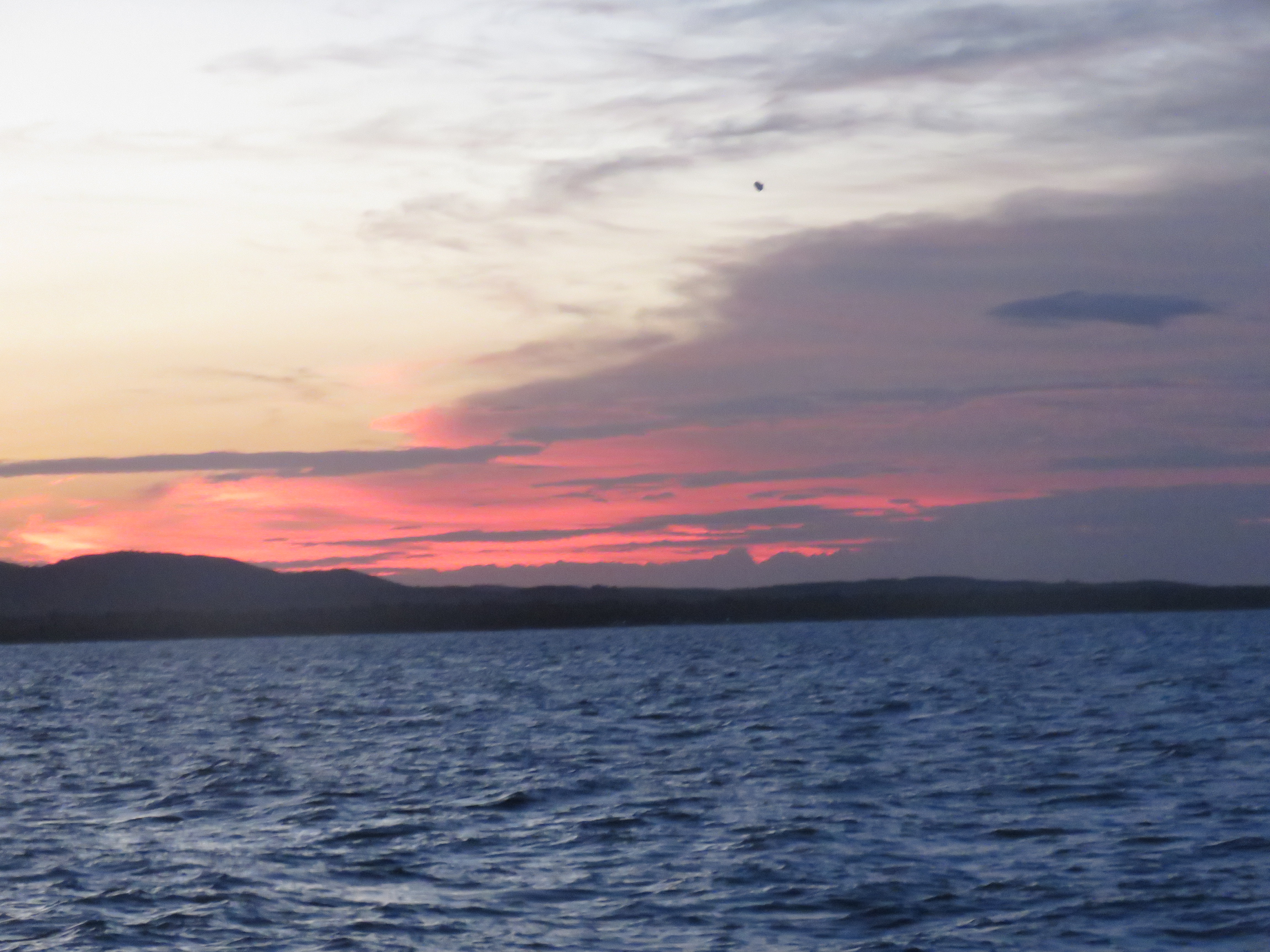 As the sun rises behind the mountains to the east Nomad sails along to round Cabo Rojo at the south-western tip of Puerto-Rico. After 11 months we are back in the Caribbean sea!
The night was calm with light winds just enough to allow Nomad to sail at 4 to 5 knots and now we have another 35 miles till Ponce.

We will stay around Puerto Rico and maybe the Spanish Virgin Islands for a month or so before we will head south to Curacao.