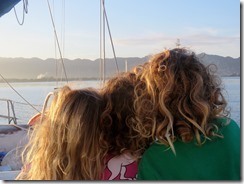 It is Thursday evening and Nomad is tied to a dock in Montego Bay Yacht Club. Two days ago when we left Port Antonio we had other plans. Yes, we headed to Montego Bay but we wanted to get there only on Saturday to be on time to welcome our friends Claire and Jack. We planned on short day-sails from one small bay to another. Enjoying clear waters and calm anchorages on the way. Free anchorages. We had enough of marinas and mooring balls we

had to pay for. But on a boat things can quickly get messy and when they do you have to adapt and find a solution. 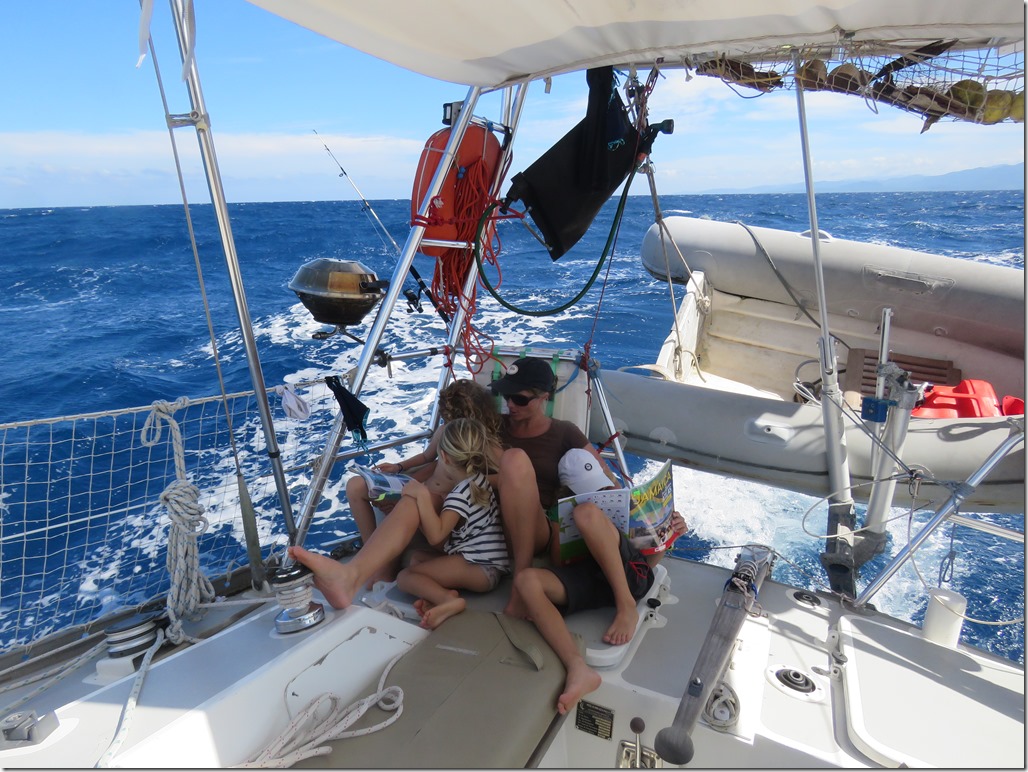 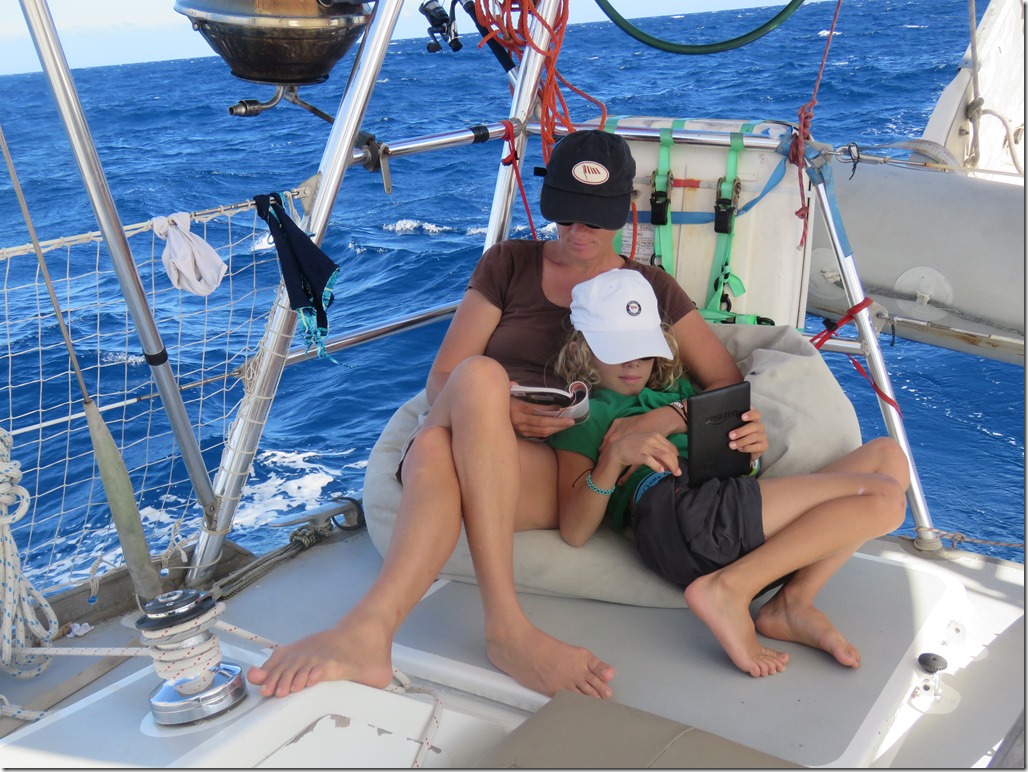 We wanted to get to Foster’s cove 25 miles away, about 4 or 5 hours of sailing. So we decided to take it easy. We had a nice breakfast, said goodbye to our danish friends on Johana who were leaving to Cuba that same day, untied Nomad from the mooring ball that held us safely for the last two weeks and headed outside the bay to the open sea. The wind was as forecast – east-north-east winds at 10 to 15 knots. We raised both the main sail and the genoa and sailed west wing-to-wing, that is, the main on one side, the genoa on the other. A fishing line in the water and everybody sitting in the cockpit enjoying the sail. 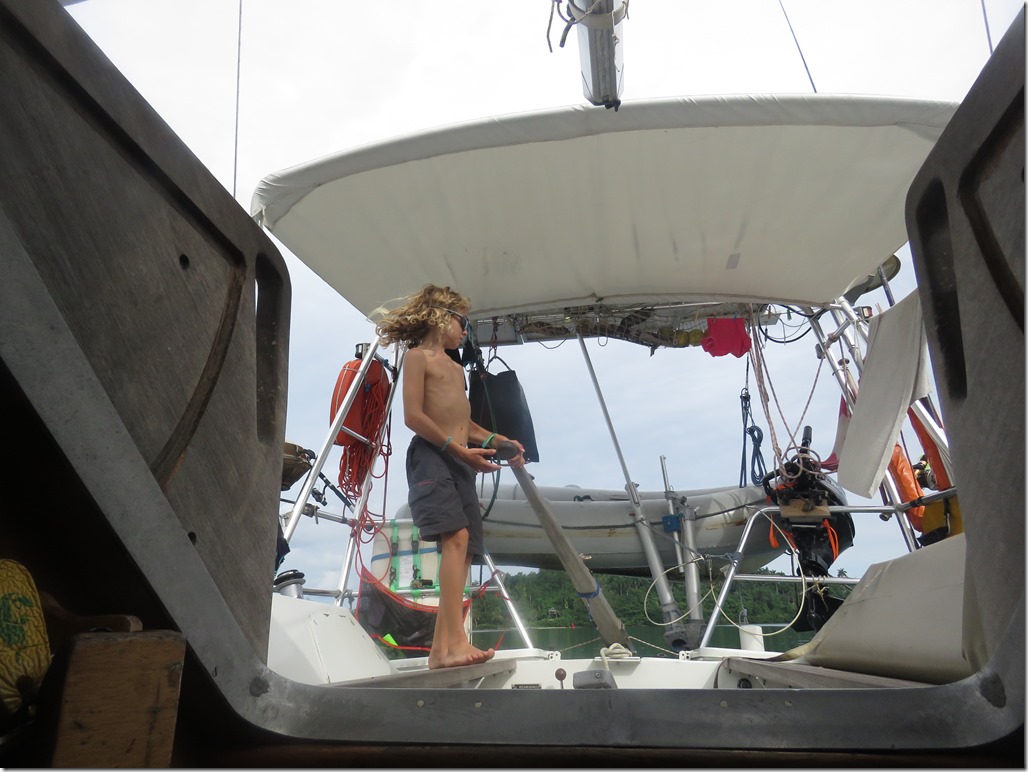 About half an hour later when I trimmed the genoa sheet it slipped from the winch and went flying  burning my hand from the friction on its way. I was holding the sheet all along and only when the burning became painful I let it go. Nothing serious just annoying.

Kattami who left an hour before called us on the radio to tell us that Foster’s cove seemed too small and the swell was making its way in. We need another plan. They decided to check out Port Maria anchorage which is a about 3 miles away. We should get there in an hour. 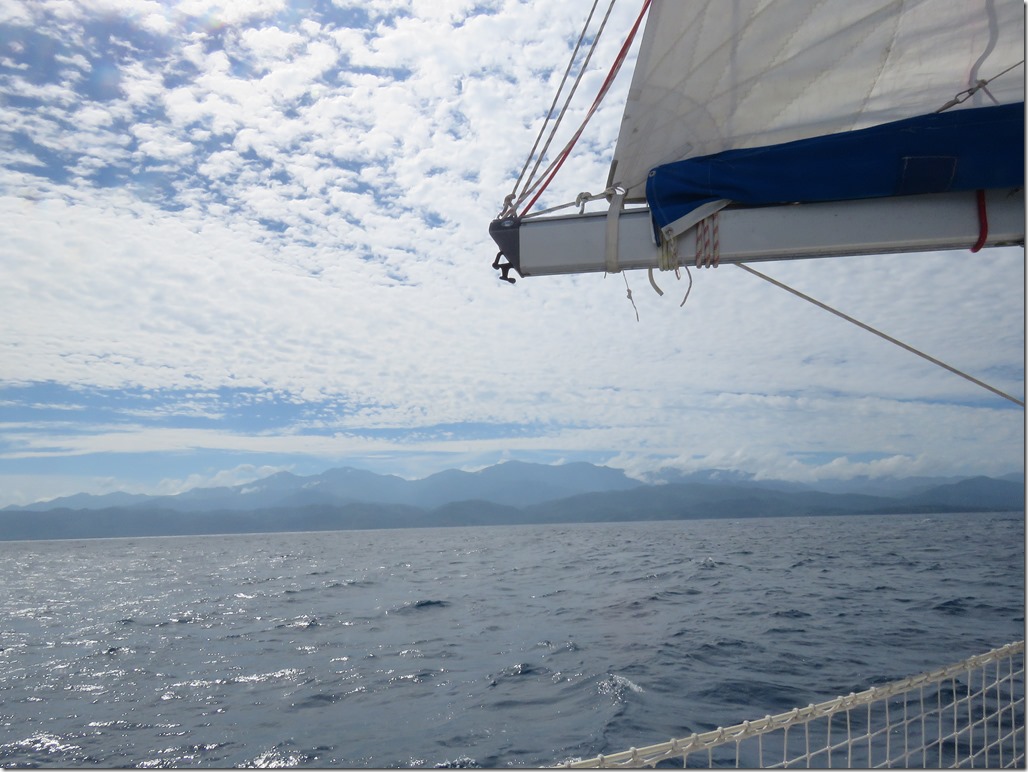 The Blue Mountains to our port side 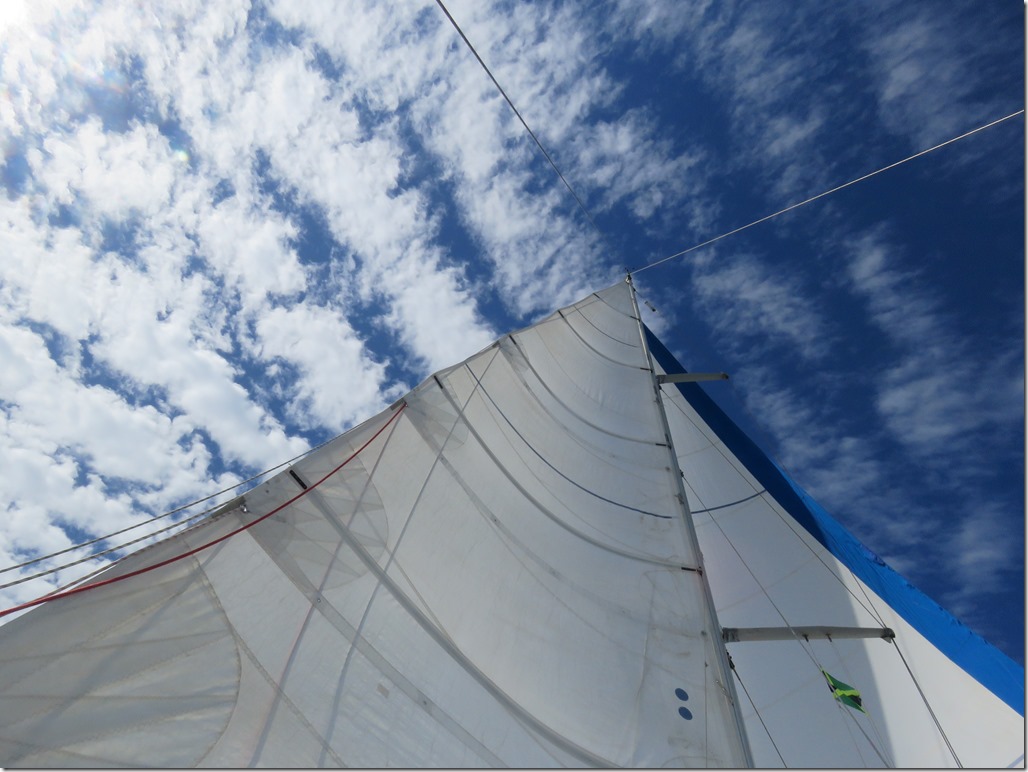 And the white clouds above

The sailing was beautiful. The sun was shinning, the blue mountains in the background and we were making good speed. The wind picked up and Nomad was sailing at 6 to 7 knots and surfing the waves at over 8 knots.

The best offfice ever

Just before the anchorage we brought our line back in. The little plastic octopus, the lure, was missing. Some poor hungry fish ate it while we were having fun and we did not notice. We approached the anchorage under genoa alone and about 200 meters away, just before we needed to turn behind the small island where Kattami was already anchored we turned on the engine. We rolled the genoa while we put the engine into gear. But as soon as the sail was all rolled we noticed that even though the engine was working it had no power – it rev’ed but the propeller was not turning. I put neutral and back in gear. Still nothing. The wind was pushing us towards the beach now about 100 meters away. Neutral again and again forward. And again. And again. Nothing. No power. We started to get nervous. 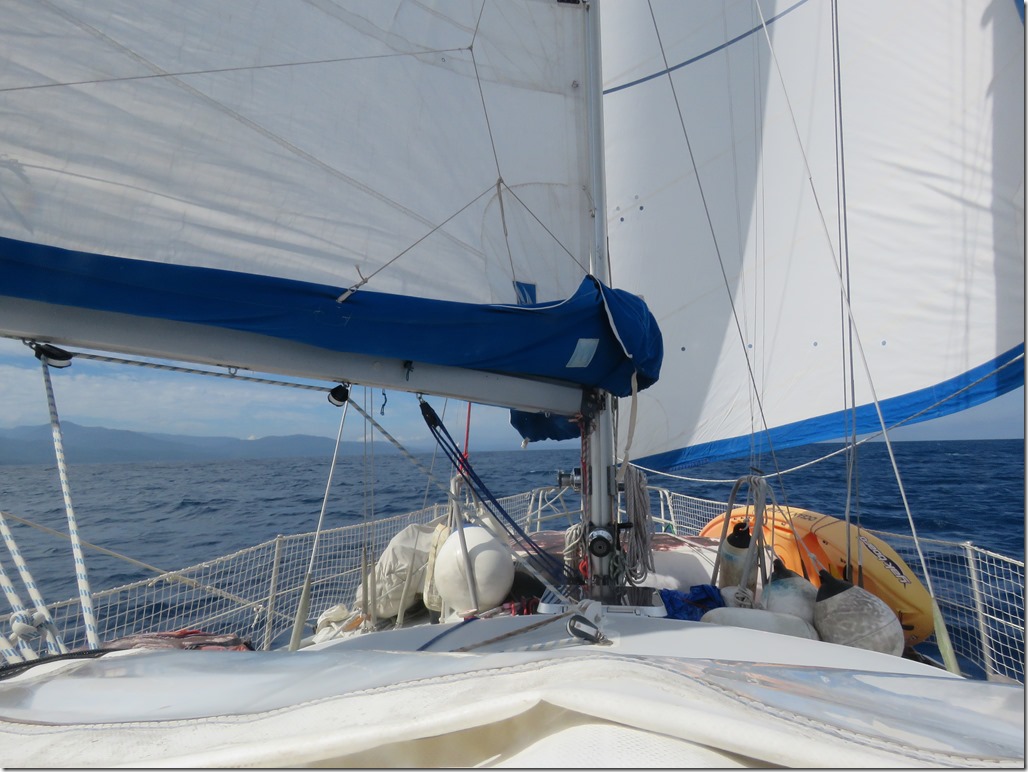 In these moments you need to think fast, consider all possibilities and ways out of the mess. Find a solution. What do we do next. Turn around and sail out seemed impossible in these conditions. We had the island on one side, Jamaica’s coast on the other and the wind was pushing us between the two towards the coast. Get the genoa out again and enter the anchorage under sail would probably work better. Drop the anchor as soon as the depth would allow us was my first thought.

We were about 50 meters away from the shore when I put the engine again forward, this time opening the throttle all the way – that is, full gas. The engine rev’ed and rev’ed. And suddenly it happened. The empty hollow noise changed to a much heavier sound of a machine that is working hard. Plenty of water were thrown outward behind the boat as the propeller started turning. And Nomad started moving in the right direction. 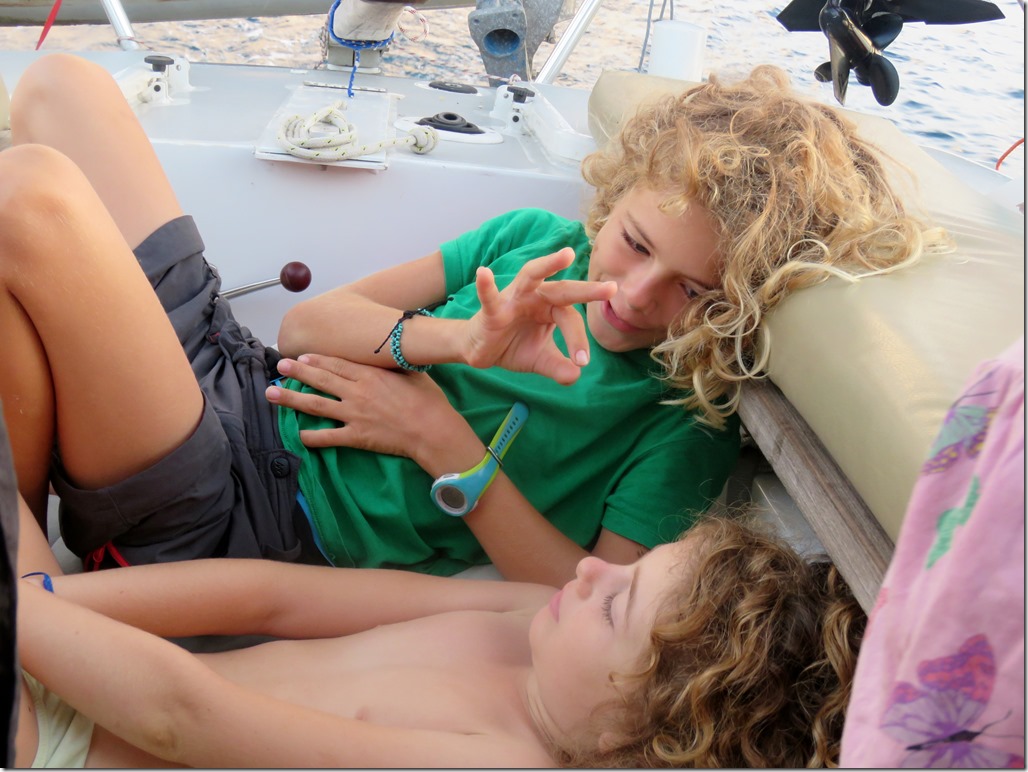 We were still nervous. Not sure what to do next. Ragnar told us it took them a couple of tries to dig their anchor. The wind was blowing outside at 25 knots and the waves by now were pretty high and some swell was present in this anchorage as well. If conditions will become worse and we wanted to get out of here we wont be able to do it without an engine. We needed a calm and safe place to try and fix our engine and this anchorage wasn’t the right place.

Again we need a plan. Virginie and me started considering all our options. Drop the anchor, turn around and sail somewhere else. But where? Port Antonio? Montego Bay? Somewhere on the way? Cuba? After considering dozens of scenarios in two very tensed minutes we decided to sail directly to Montego Bay – another 65 miles to the west. Kids were not too happy. They expected to drop the anchor soon and go swimming with their friends. And it meant sailing all night arriving only tomorrow morning. They too have to learn to adapt. 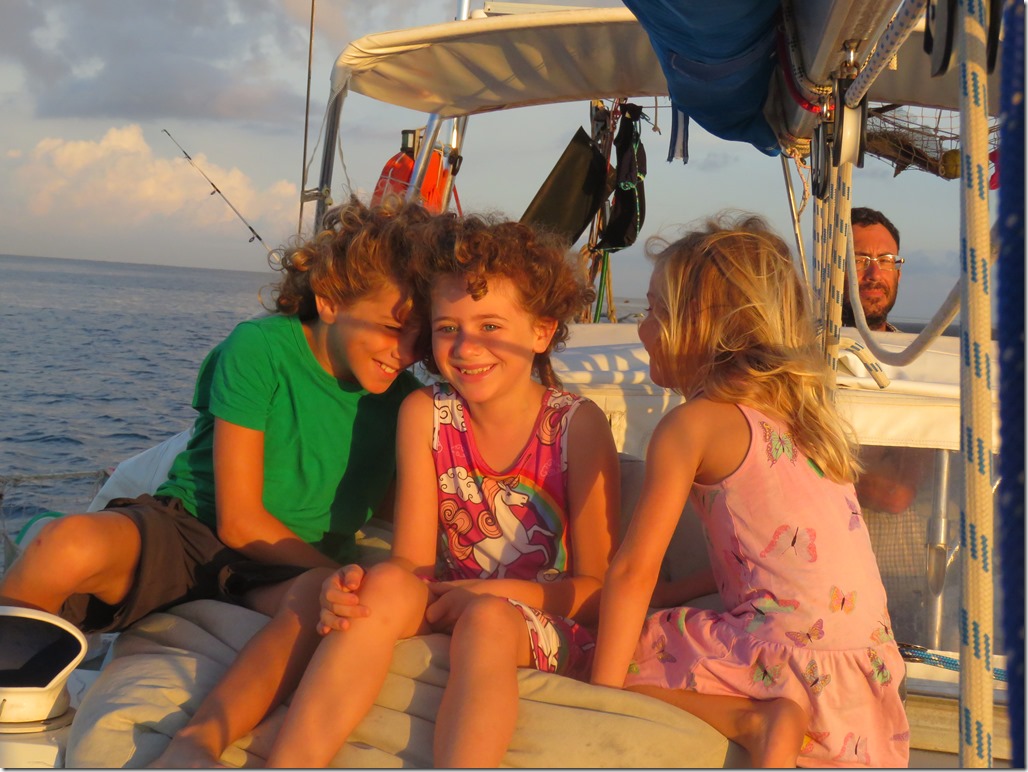 All this material damage is nothing. One look at these happy kids and everything is beautiful again.

As we left the protection of the island we were beam to the waves. The engine was running but we were not making more than 3 knots. The waves made the boat roll violently. Things were flying inside the boat and outside our dinghy was rocking like a roller-coaster. Virginie managed to save the fuel tank just as it was about to go overboard but the dinghy pump and the sponge we use to dry it did say bye bye. Now It wasn’t just a sponge but a real natural one Virginie found in the Bahamas. A souvenir of happy and beautiful moments. The sea gave, the sea took.

It seemed as if a cloud of darkness rolled over us. Especially as we found out that the hatch on top of our galley sink had a big crack. We could not understand how. Maybe with all the things that flew around something hit it? Maybe when the boat rolled before something (a bolt?) fell off from the top of the mast and hit the window? It all seemed improbable. Afterwards we figured out that it probably happened yesterday when one of the kids opened the hatch too strongly and it hit the wooden hand rail behind it almost breaking it. But it changes nothing how it happened. Now  fixing the window is just another item in our todo list. Moral aboard Nomad was not as high as before. 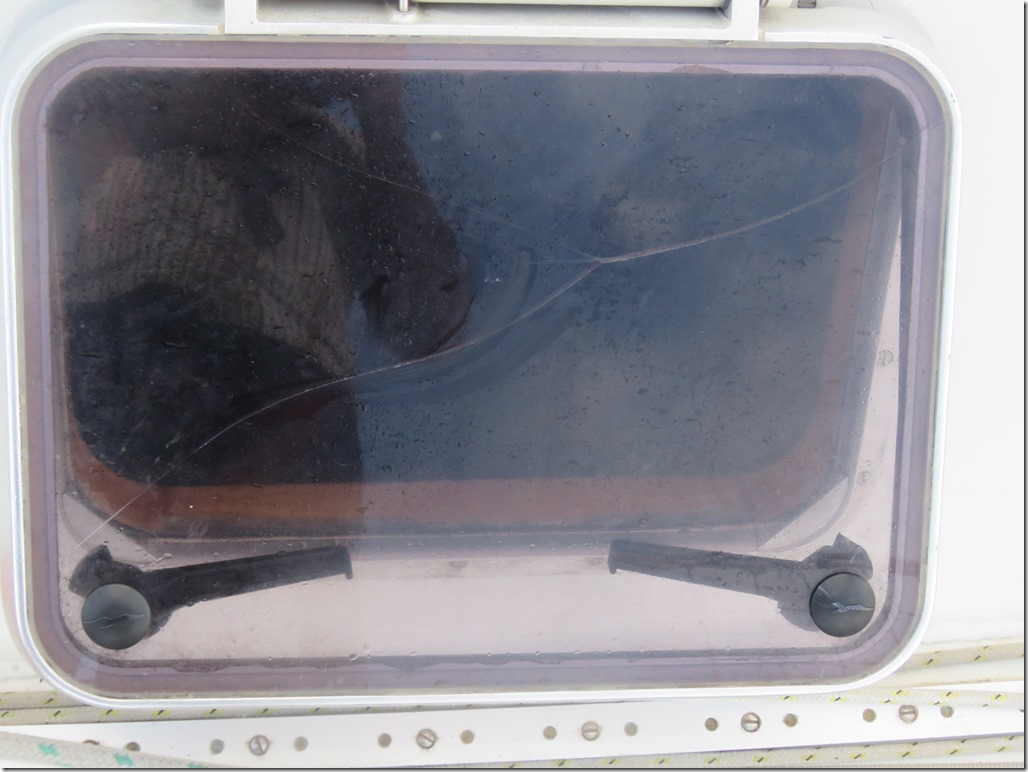 We started questioning our decision, is this the right thing to do? Maybe we should have just dropped the anchor next to Kattami and all this wouldn’t have happened? Maybe we should go back to Port Antonio which is more protected and unlike Montego Bay has facilities to take the boat out of the water. But this meant going back 25 miles against the 20-25 knots of wind. It will probably take us almost the same time as to get to Montego Bay. Maybe we should stop somewhere on the way.  But there were no satisfying anchorages with an easy entry and exit (if we needed to do it under sail) enough protection and having some shops in case we needed tools or other things like oil. So we decided to keep on westward. 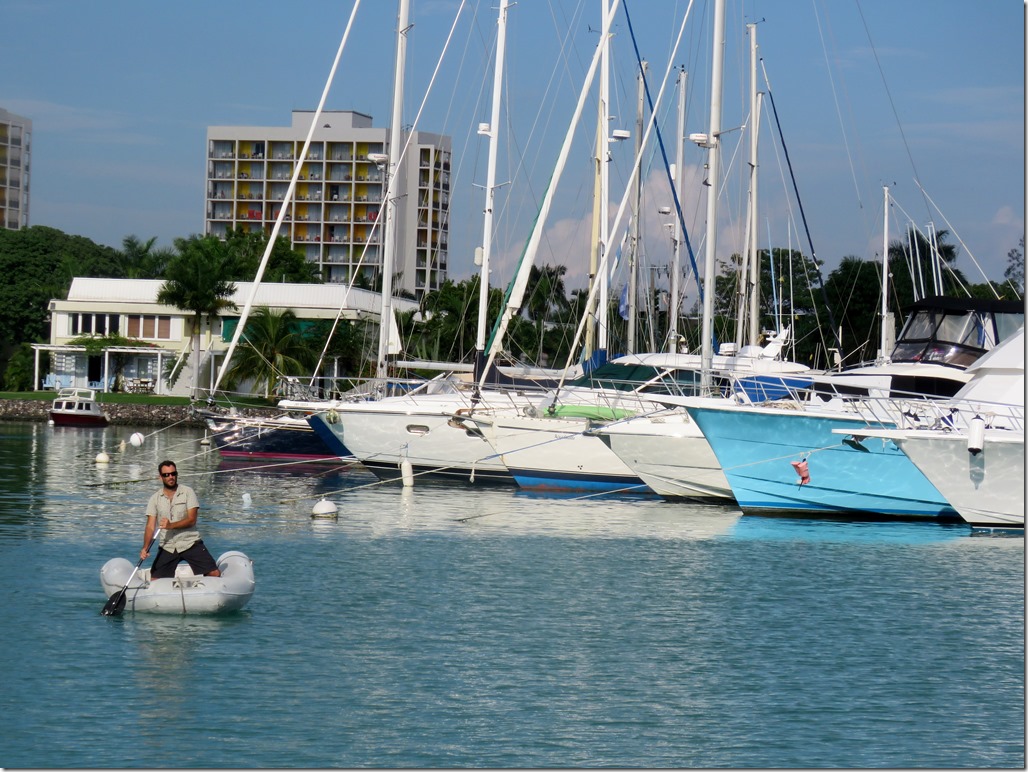 The night went without any new incidents. We just did not get much sleep and were tired in the morning. We arrived in Montego bay early the next day and took the first mooring ball we could find. Again it took a couple of tries to get the engine going and so once the propeller was turning we did not put it in neutral until we were sure we could get hold of the mooring. We needed to move onto the dock but by the time our designated place was free the wind picked up again and we were afraid doing the maneuver with a hectic engine. We waited for the morning and with almost no wind we sort of towed our boat to the dock simply by using the dinghy and very long lines without using the engine. 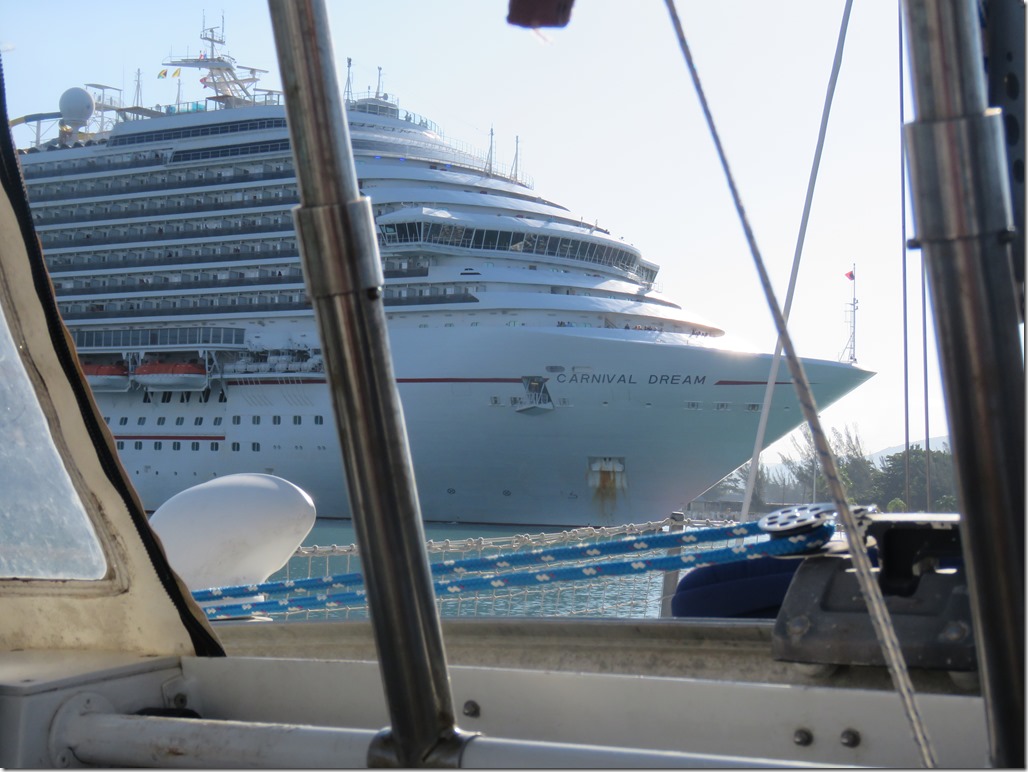 This big fellow came in the same time as we did. Another cruise ship arrived an hour later. Virginie’s new challenge – to get a guided tour on one of these monsters of the sea.

Once in the marina, I spent the whole day in strange and some very painful positions trying to make the engine run correctly again. I found on the internet a very detailed pdf file with drawings and pictures explaining all the steps how to fix the exact problem we had. I followed all the instructions to the letter including the prayer and the beer at the end. To tell you the truth, it felt like black magic. 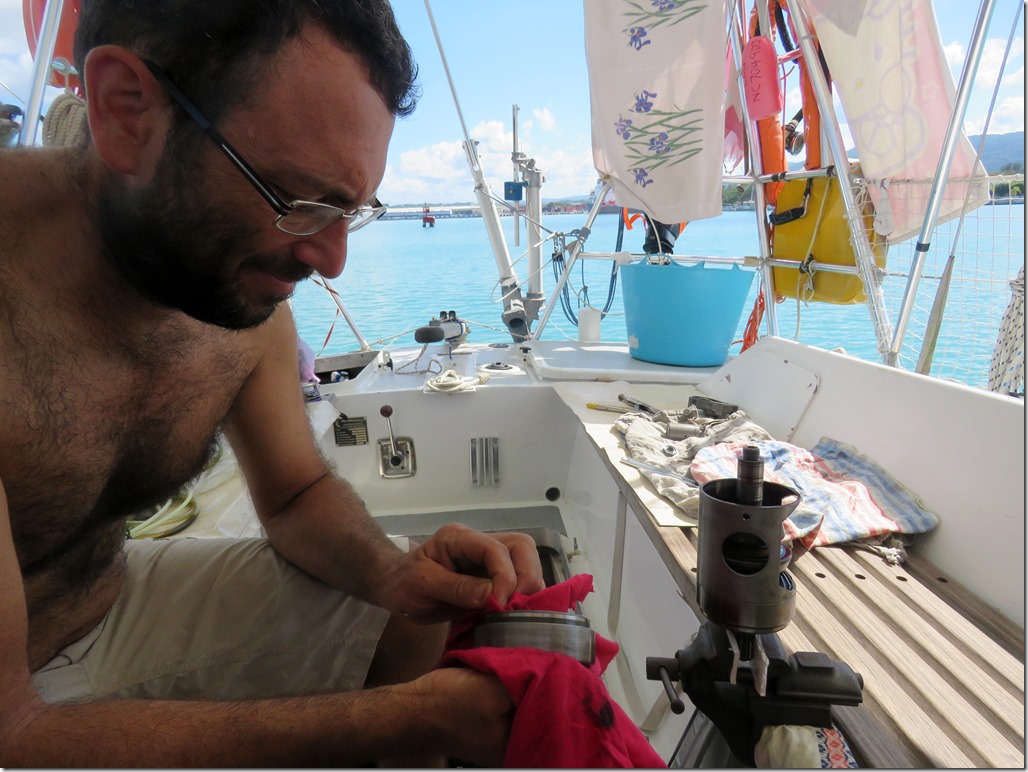 So thank you Fritze von Berswordt to writting and publishing this bible.

Anyone with a saildrive thinking he might encounter such a problem in the future or simply out of simple curiosity can read the file here: 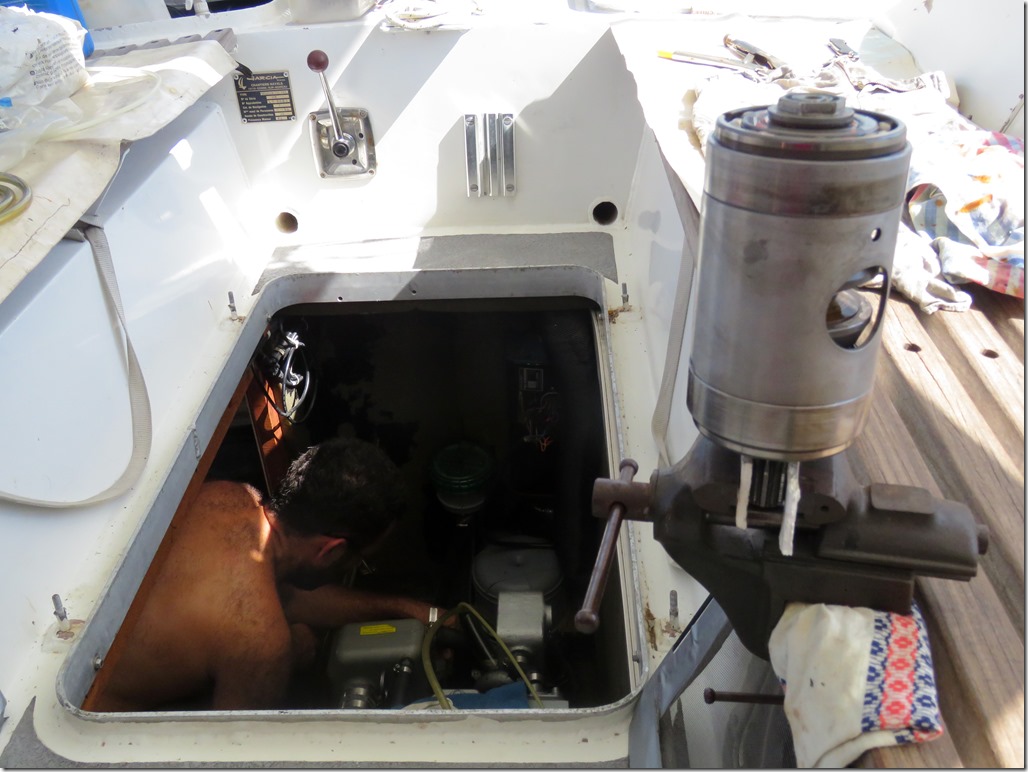 And just to be clear, moral on board Nomad is once again very high!

Claire and Jack, we are looking forward to be with you very very soon!