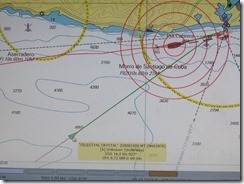 We left Montego Bay a little after 1800. We were hoping to motor slowly eastward during the night when the trade winds die because of the land breeze that usually picks up at nights. Unfortunately that night, maybe because the sun was absent in the last 4 days so it did not heat up the land, the trades were still blowing at 10-15 knots from the east. So after a couple of hours when the winds got to 20-25 we decided simply to head north and keep our easting on the south coast

of Cuba. The sail was tough. The seas were very confused with swell from both northwest (remnants from the front that passed two days ago) and the usual east swell together with the 25 knots on the nose so our progress was very unpleasant. 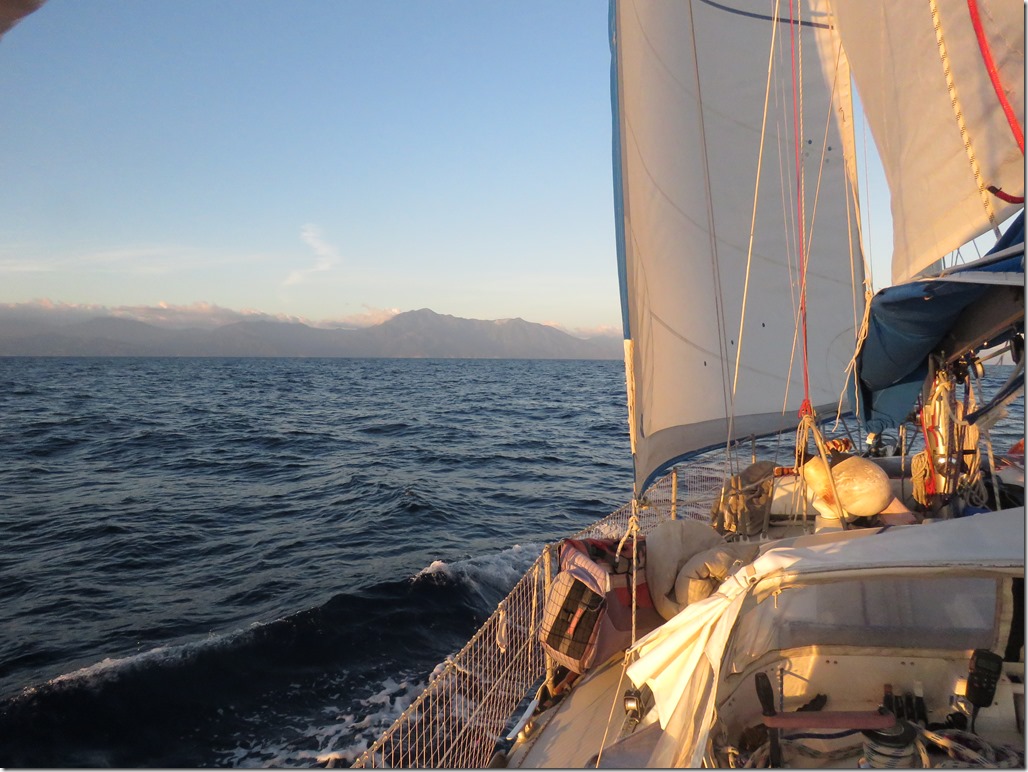 About 45 miles away from Cuba we could notice the high mountains of the Sierra Maestra. As we got closer to the coast the wind weakened and the seas calmed down. We got to the Cuban coast just before sunset but we were still 55 miles to the west of our destination. During the moonless night, under a blanket of stars, a light northerly wind allowed us a smooth sail along the south coast all the way to Santiago. 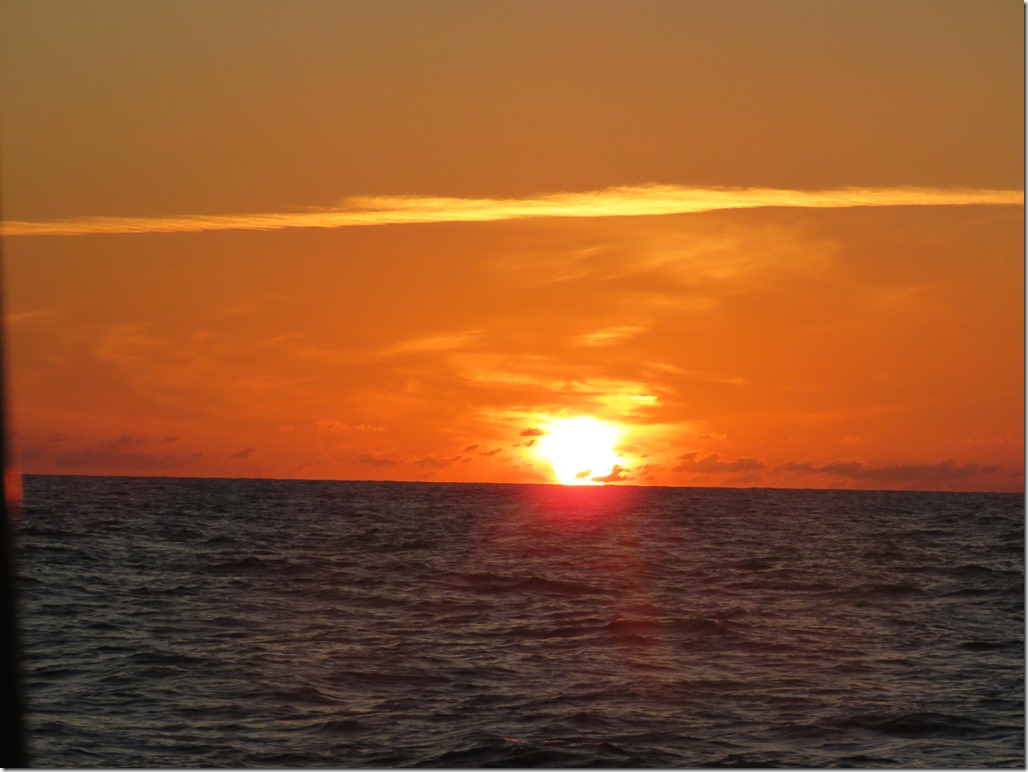 Our first sunset in Cuba 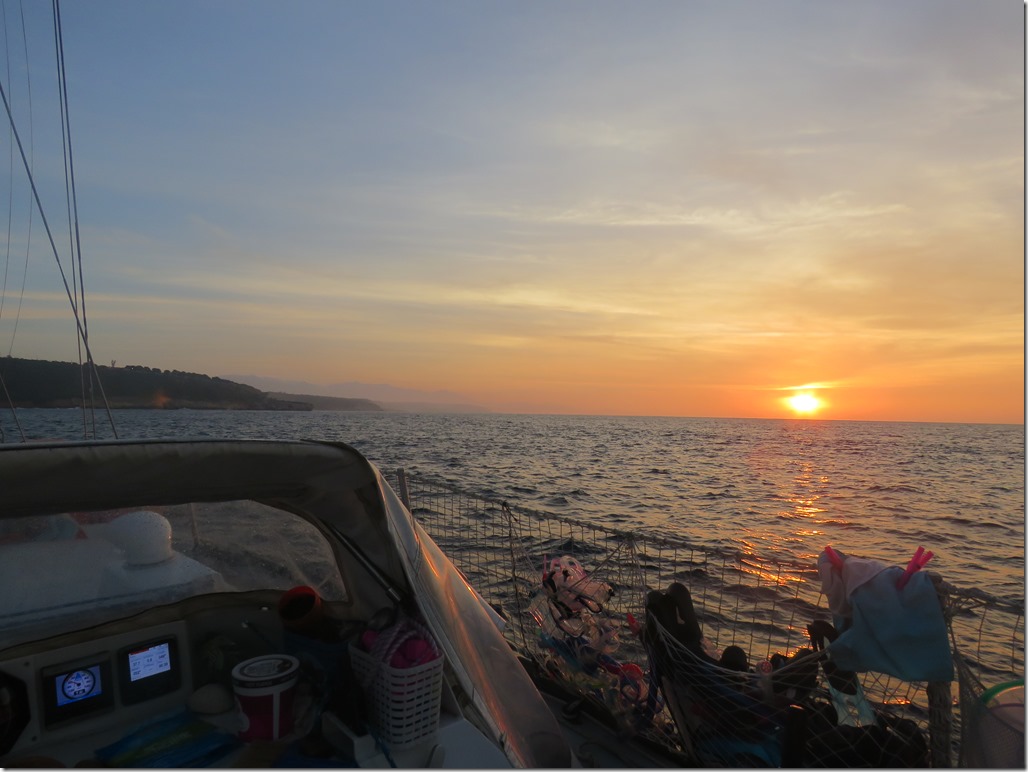 We had another 5 miles to the entrance of Santiago’s bay when we saw Celestyal Crystal, the cruise ship we visited in Montego Bay two weeks ago, on our AIS about 15 miles behind us. Just as we got passed the first red buoy marking the bay’s entrance a pilot boat came out and headed directly towards us. Very kindly they asked us to wait outside and let the Celestyal Crystal pass ahead of us and then wait some more until another cruise ship will get out of Santiago. No one on board was too happy to wait outside in the swell after two nights of little sleep so close to our destination. At least we could enjoy the beautiful sunrise on the ocean. 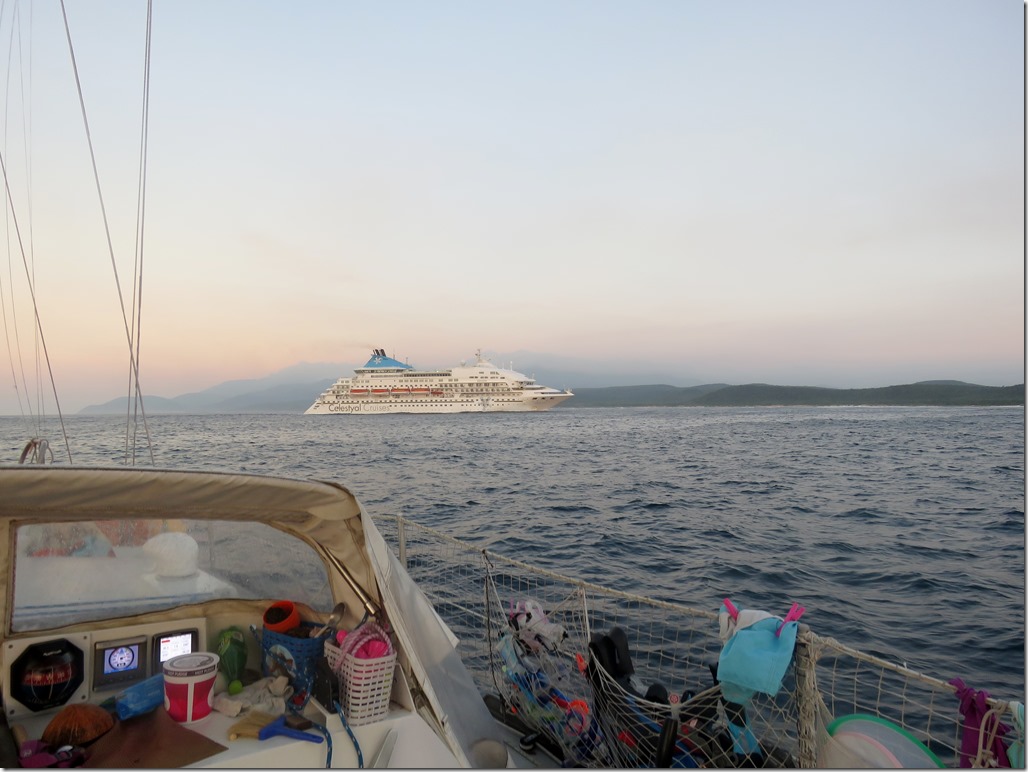 While waiting we had another pleasant surprise – we heard Ragnar from Kattami on the radio trying to call the Cuban coast guard to tell them they are approaching Cuba. They left Port Antonio yesterday and were now only 7 miles away from us. Kids were already very excited to get off the boat so now they were really impatient. 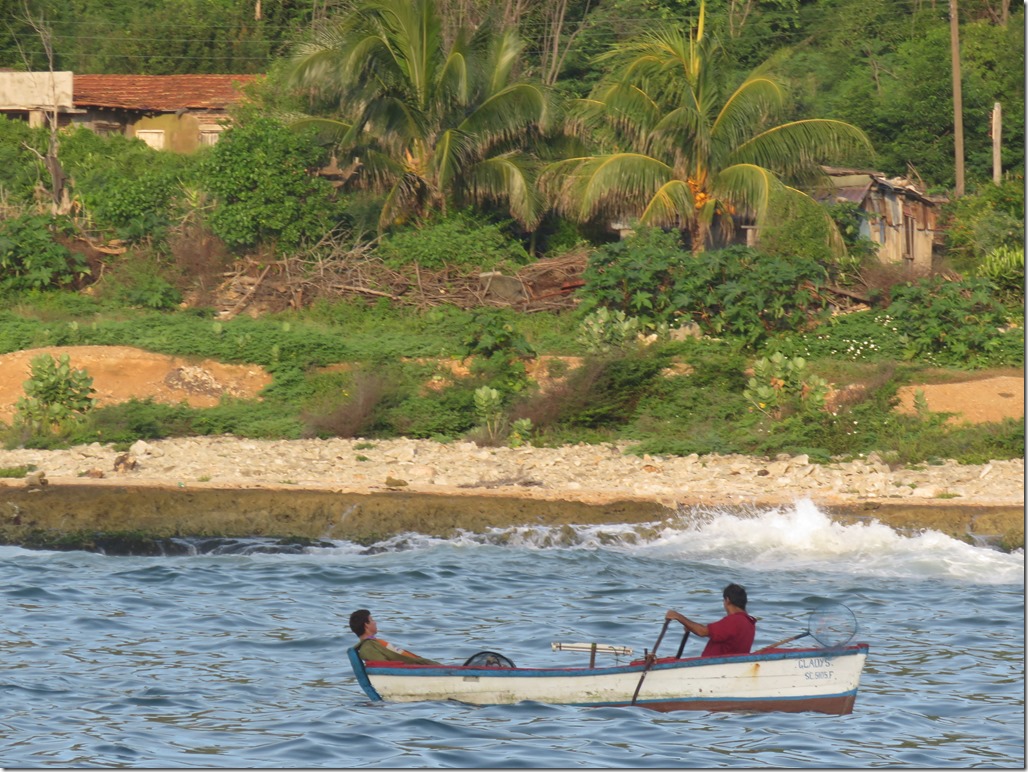 Fishermen rowing back to port 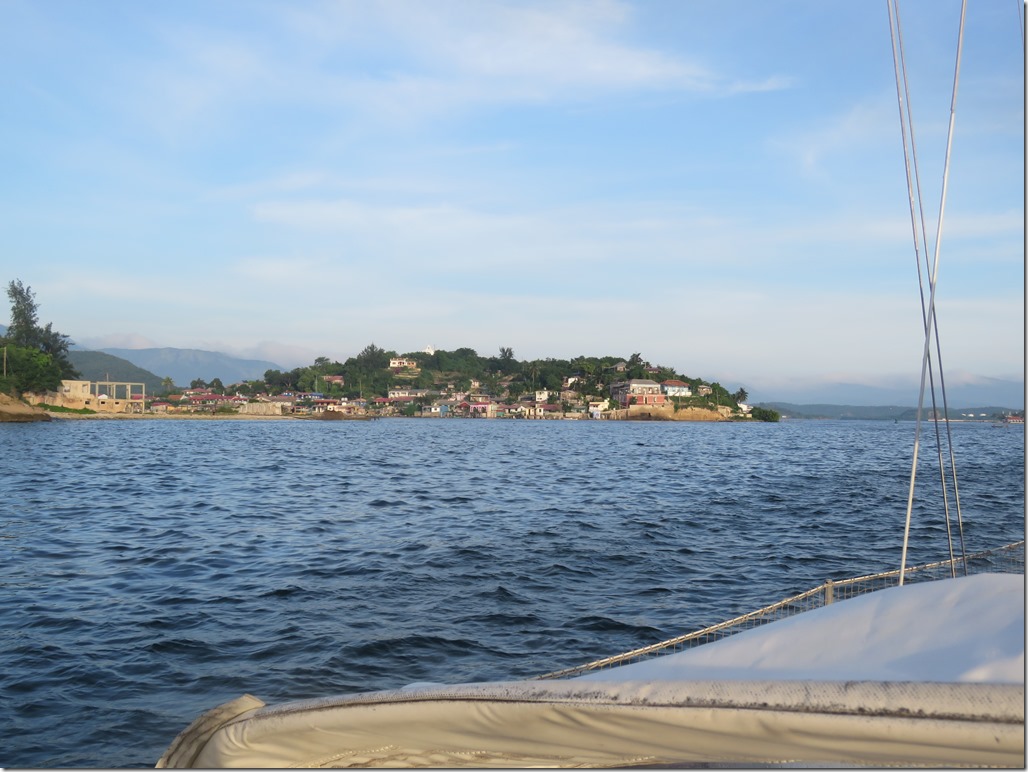 After more than one hour of waiting in the ocean swell we could finally enter the bay of Santiago de Cuba first passing El Morro, the big Spanish fort that used to protect the bay from pirates and other bad guys, than Cayo Granma with its little church and small fishing huts. The swell was braking on the cliffs around us and a couple of little fishing boats (without engines, only oars) were coming back from a night of fishing outside in the ocean. It was one of these magic moments arriving at a new country from the sea.

First official on board was a very nice lady – the doctor, she came to make sure everyone was healthy. She wanted to take our temperature but as our thermometer did not work and she did not bring any we ended up just sitting in the cockpit having a coffee and a small talk.

After the Doctor, we had a visit from Lili, the little and very cute narcotic police dog (after all, we were coming from Jamaica..) . She came onboard together with her trainer that had hard time making her search the boat as all three kids did not stop caressing and playing with it. 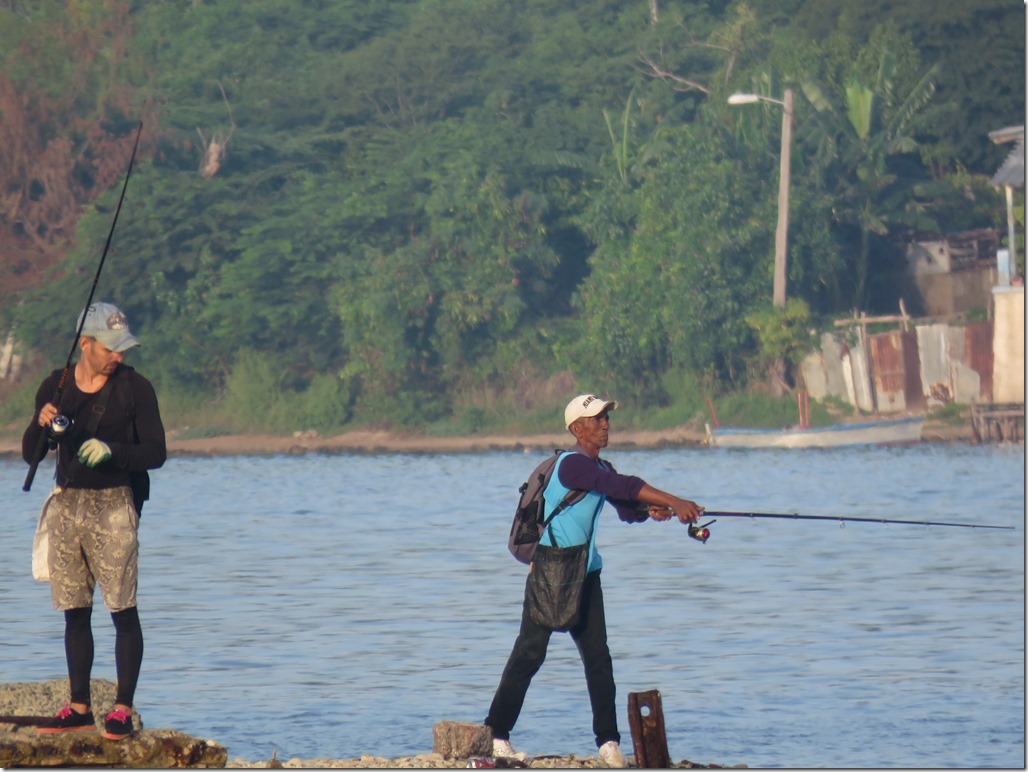 Fishing at the entrance to Santiago’s bay

I later spent an hour at the customs office with a very kind officer who filled up plenty of papers and inquired to about our stocks on the boat – from what fruits and vegetables we carry, the type of our canned food to the number of the mobile phones brought with us. Sitting in this little office with the photo of Fidel Castro on the wall behind the custom’s officer I realized – we are really in Cuba!

And just for those future cruisers planning a trip to Cuba, entry fee to Cuba is expensive. It is 75 CUC (about 75 USD) per person plus 55 CUC for the boat. No discount for kids. The customs officer who himself felt very bad that we had to pay so much (about 450 USD in total) told me we should have got our Visas beforehand and that way it would have cost about half. I don’t know where and how to go about and get these visas but he said something about travel agencies that can do this outside of Cuba. So worth checking.