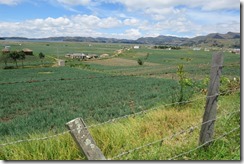 Early in the morning we took a small and crowded bus to Aquitania. This little town sits at 3015 meters on board of the biggest lake in Colombia. The smell that reached us left no mistake – all these fields we could see from the bus’s windows were onion fields. It was a surprise to see agriculture at such altitude.

After a short stroll around the village in search of a bank and some fruits for the way we came back to the town square where some children in school uniforms showed lots of interest in us and our kids. We wanted to take another bus that goes around the lake but instead of waiting 30 minutes for it to come we decided to start walking around the lake and just jump on the bus when it pass next to us. This is very common in Colombia. Unlike in the western countries where you need to wait at the bus station to take the bus here you simply wave and the driver stops right where you are. 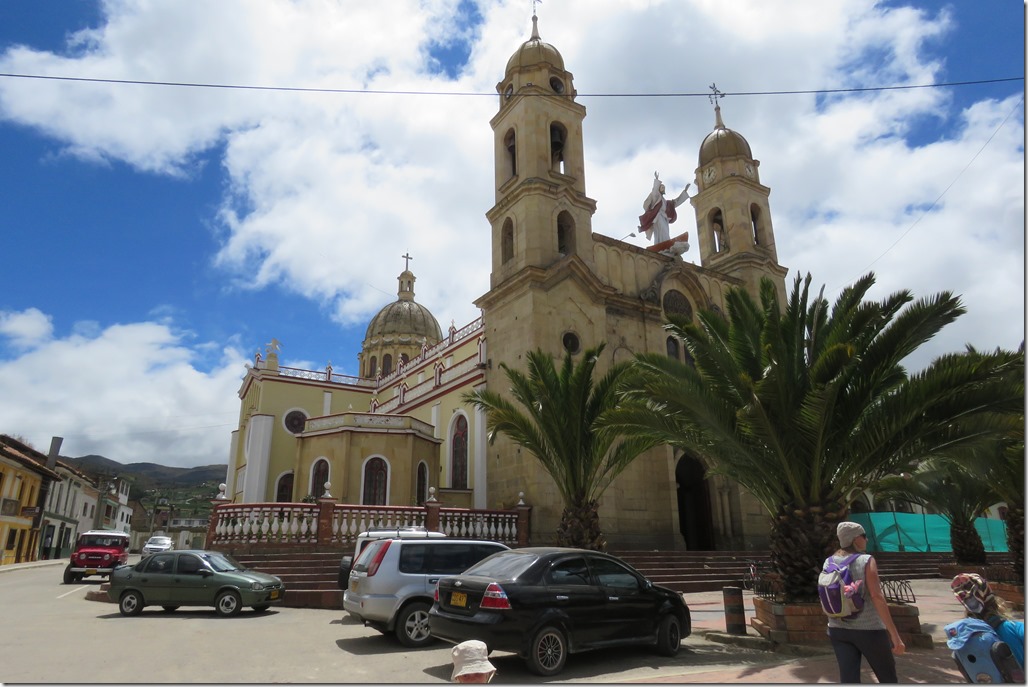 Did you notice Jesus surfing the waves? 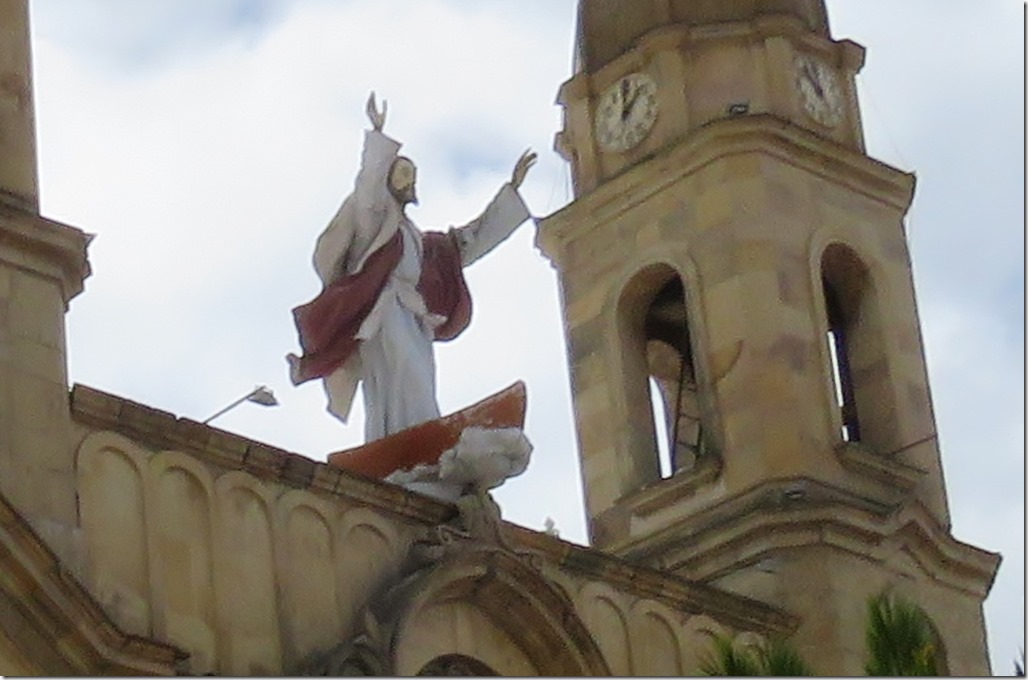 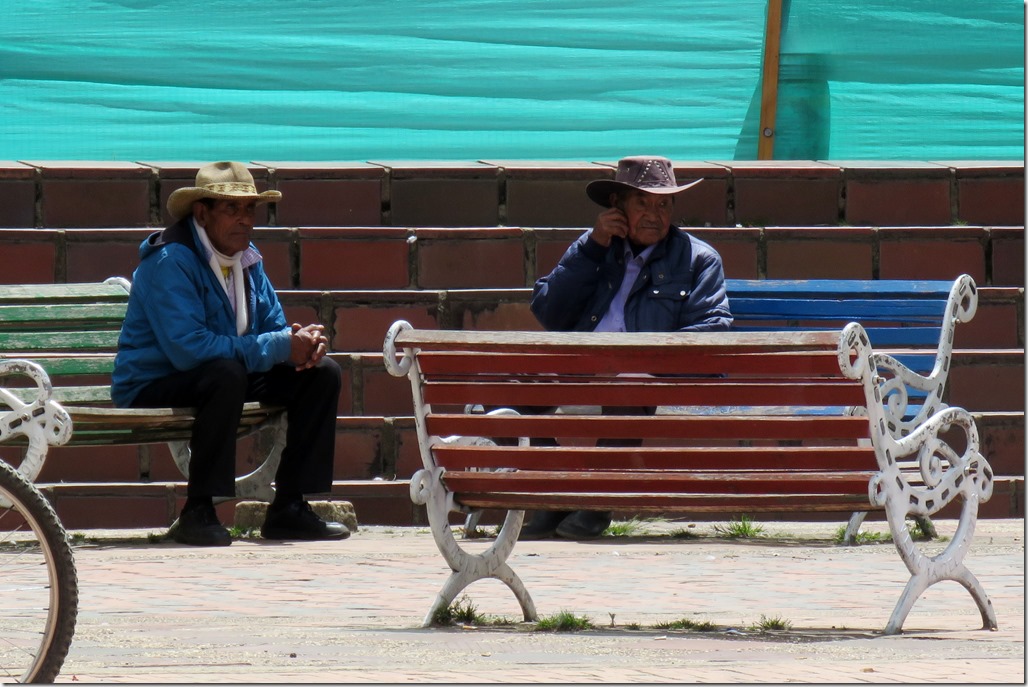 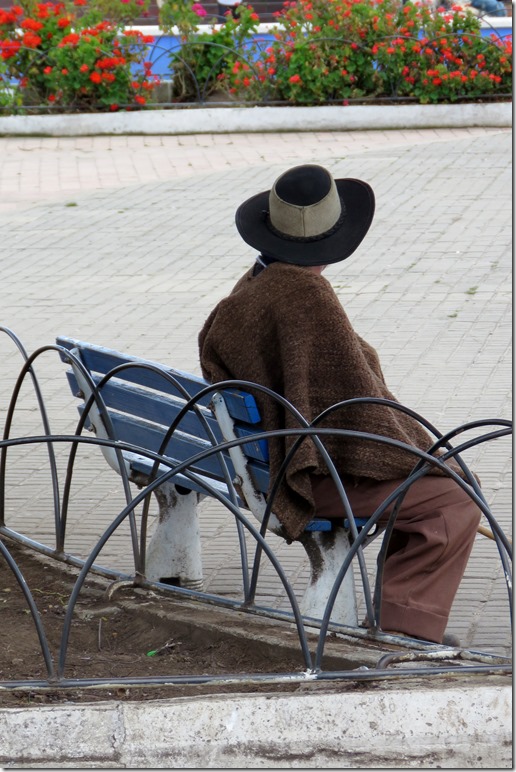 Walking away from town towards the lake. 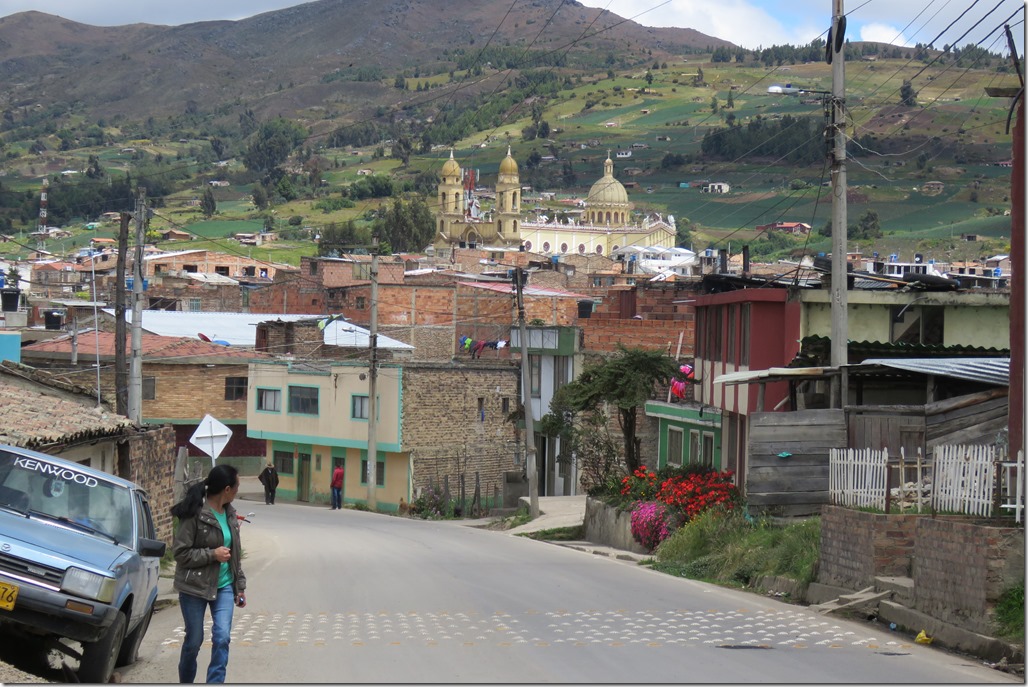 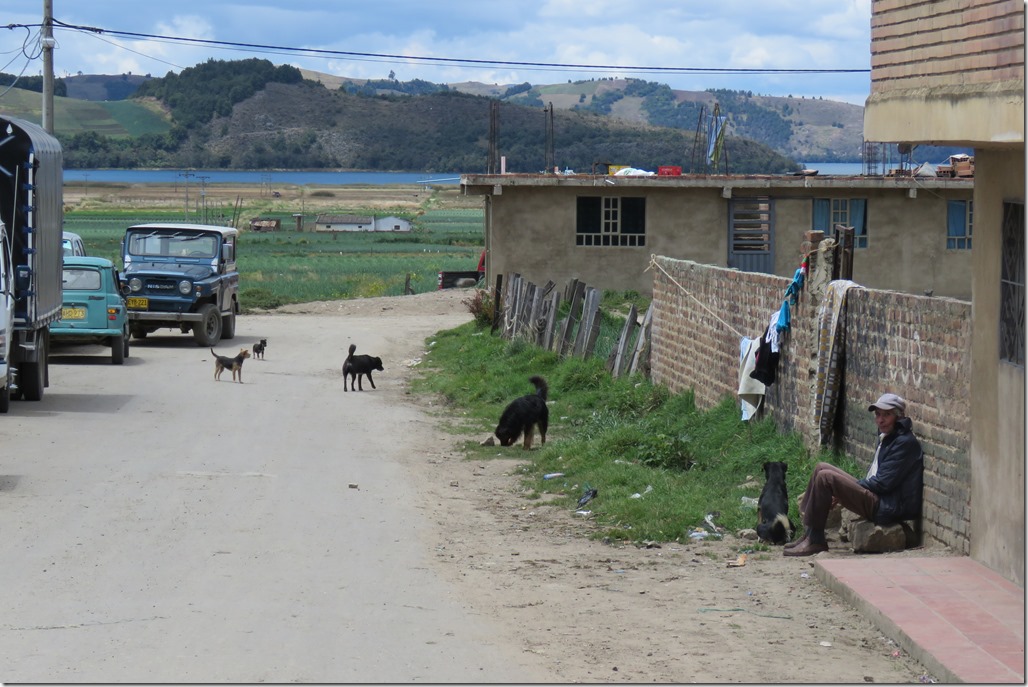 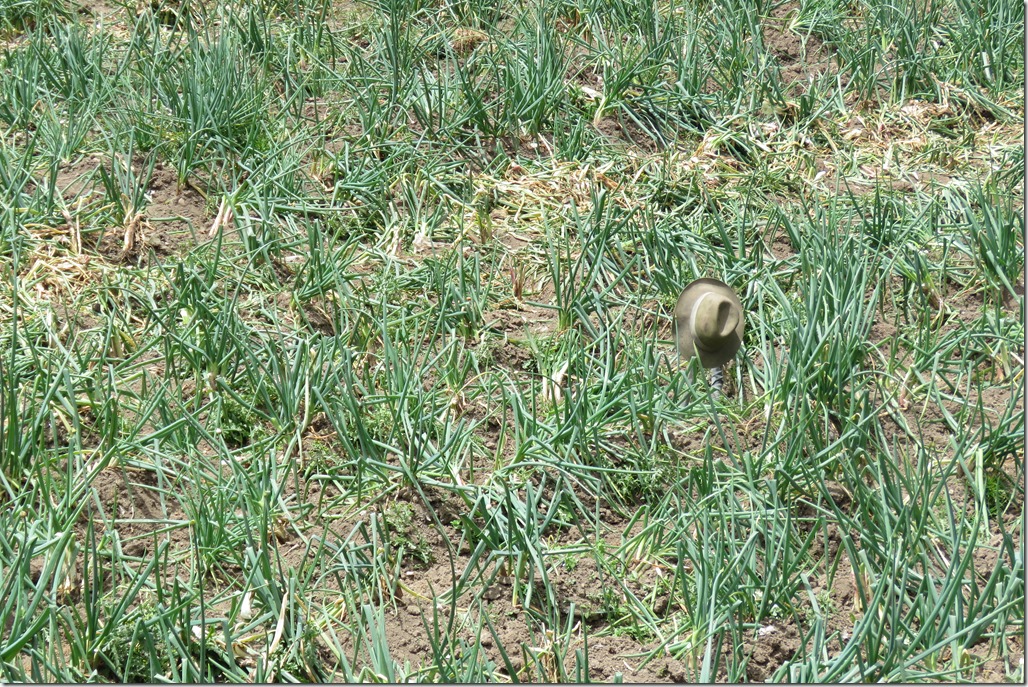 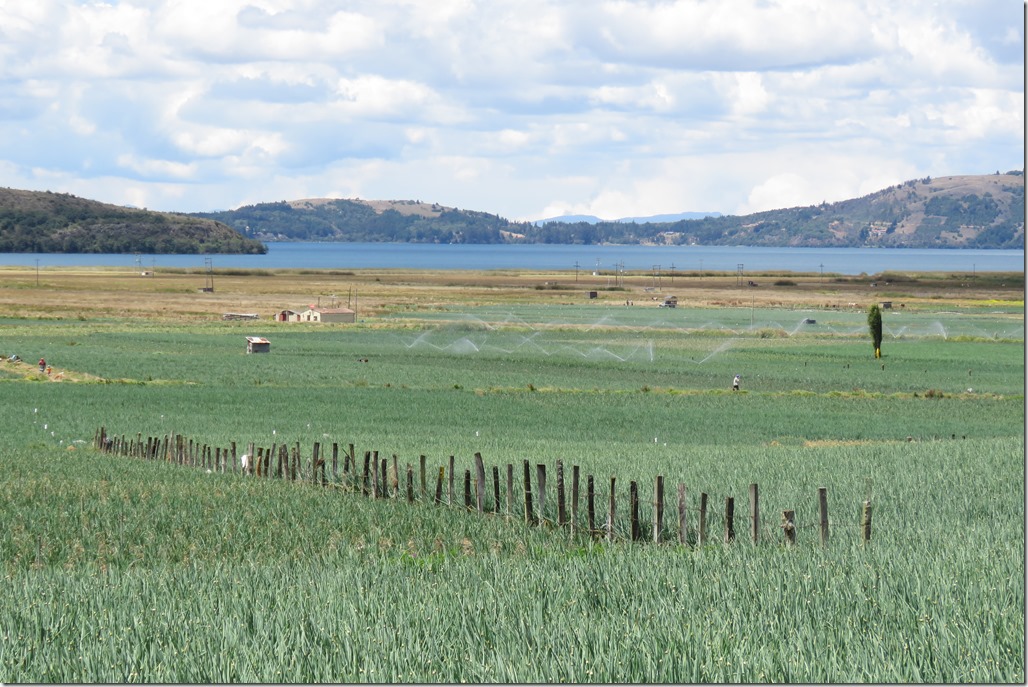 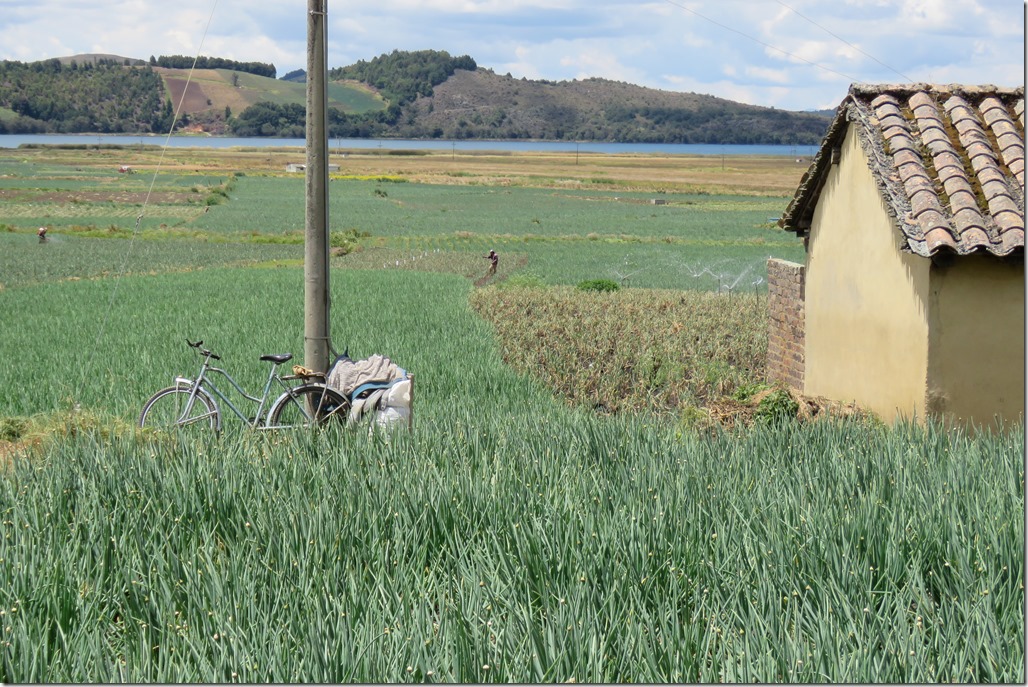 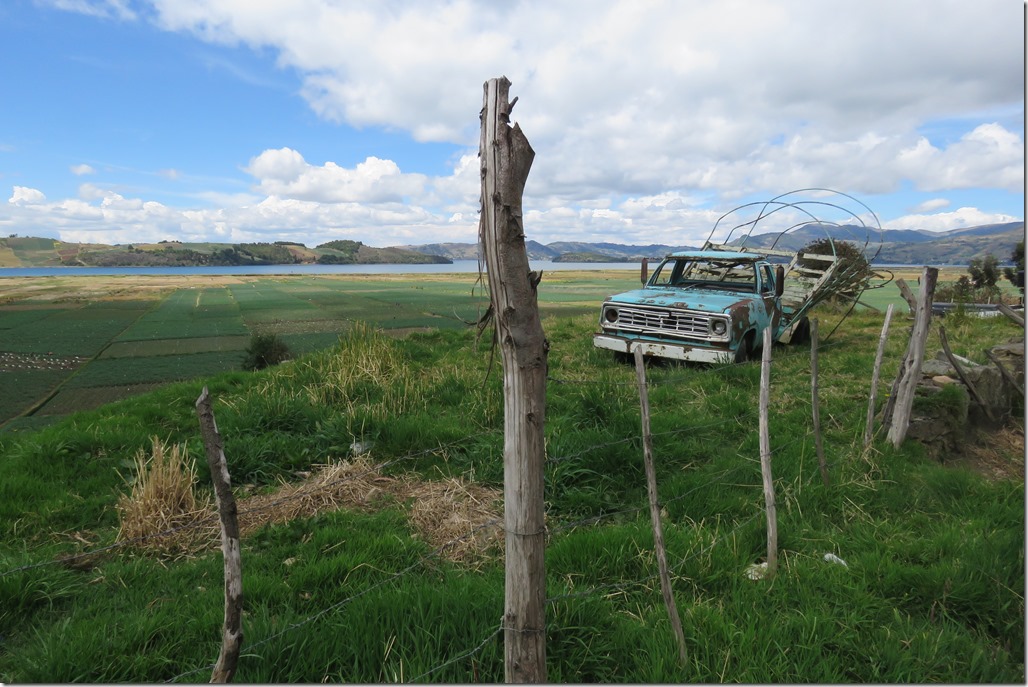 We got off the bus near playa blanca – a little beach with white sand. You could mistake the view from the shore to the other side of the lake to be in Lac Leman. Just replace the onion fields with vineyard terraces.. With the small but chilly wind it was hard to convince anyone to go for a swim so instead we went for a walk. 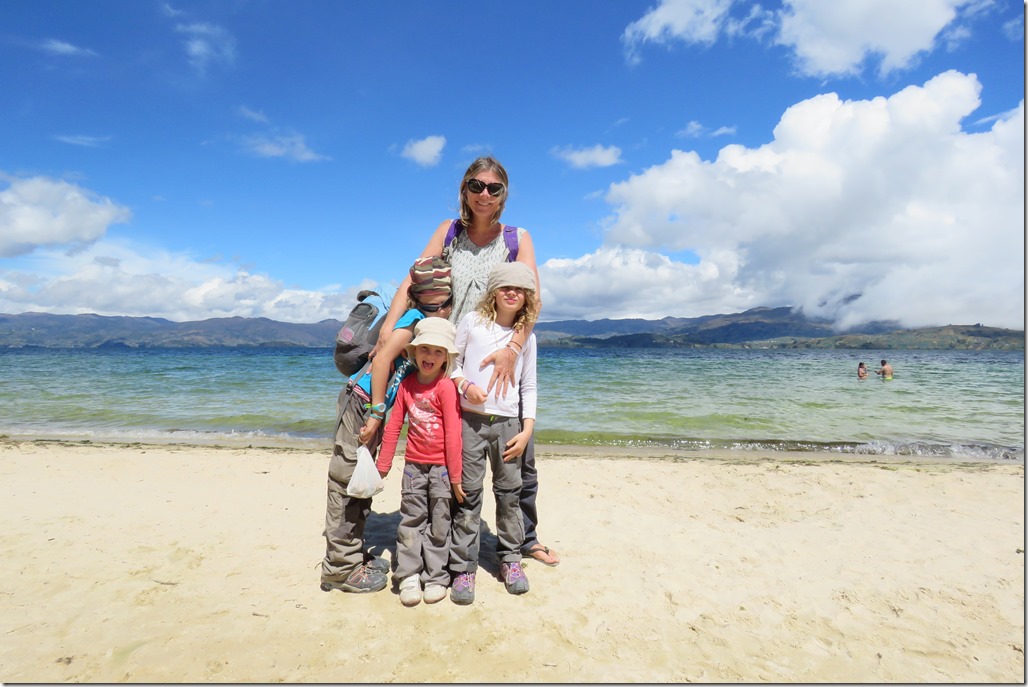 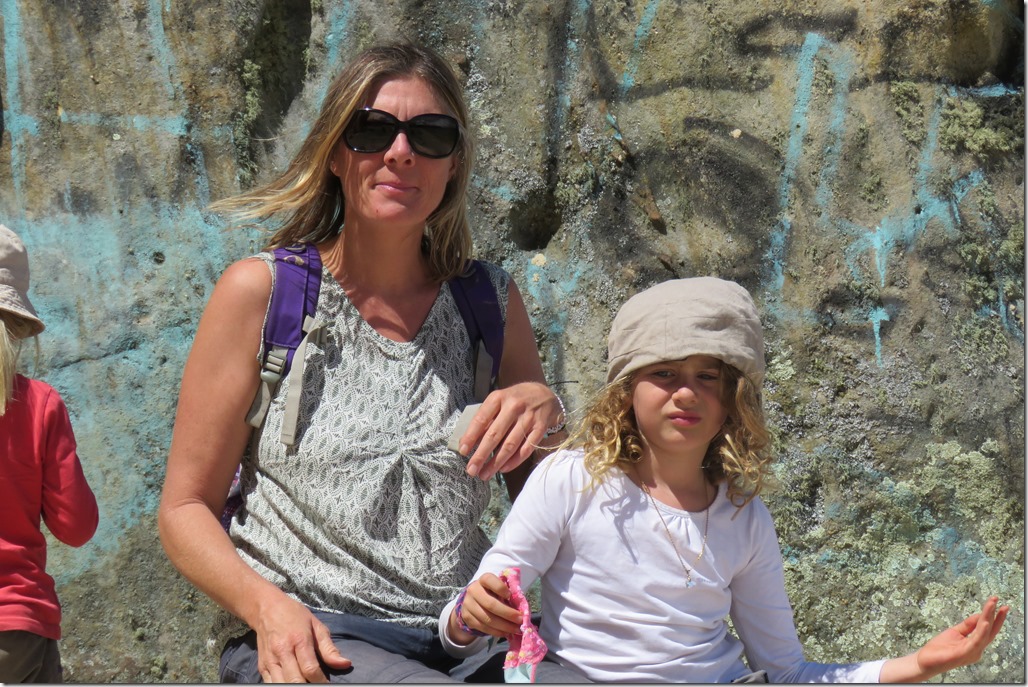 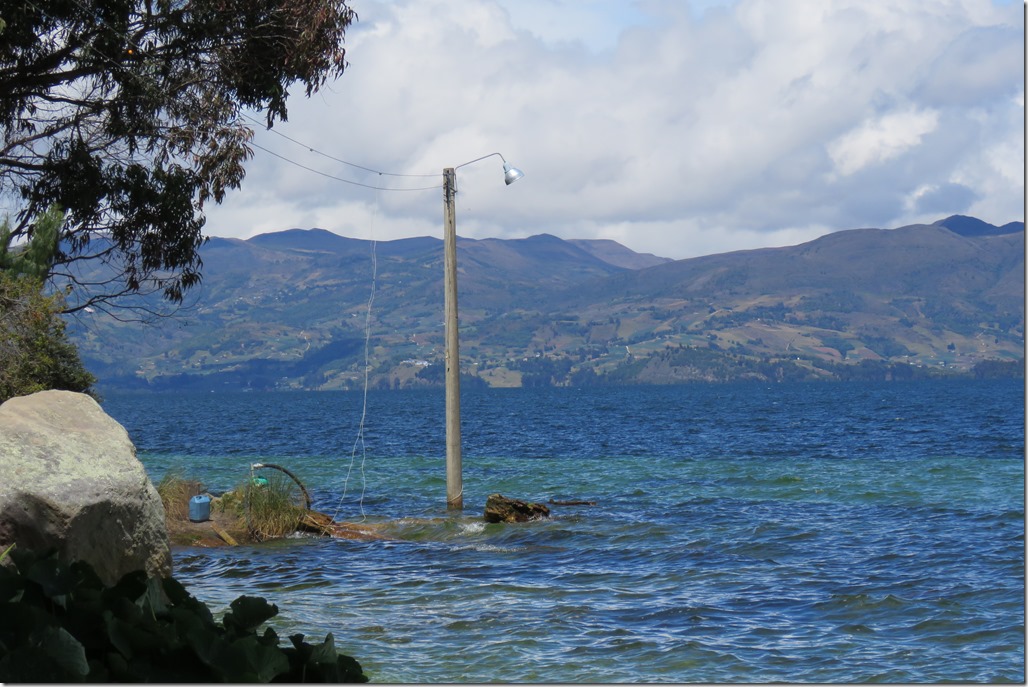 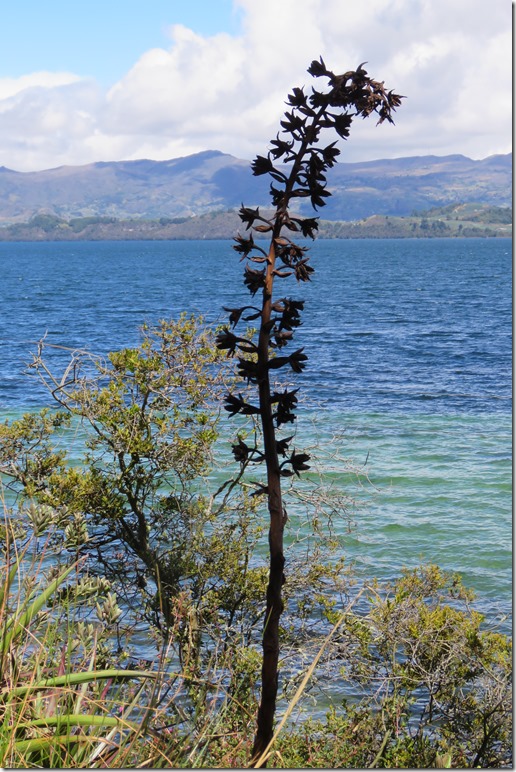 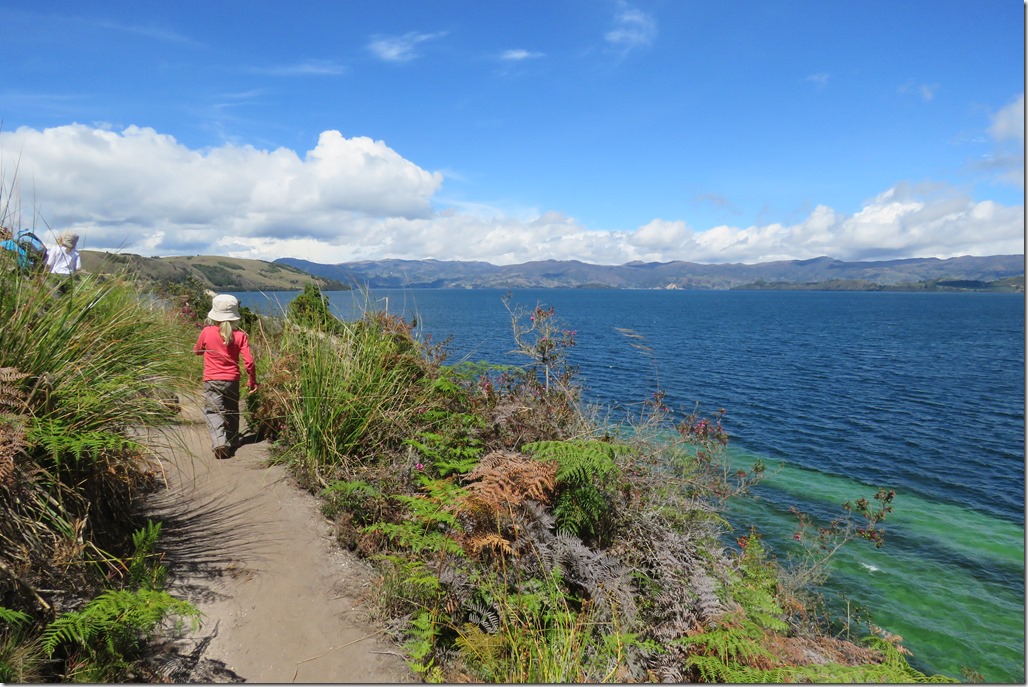 After 10 minutes walk around the lake shore we arrived at this farm house which is actually a very nice restaurant making delicious freshly fished trouts. In Colombian standards it was a little expensive – about 24000 pesos a fish which is a little more than 8 USD. But the setting and the food were exceptional. 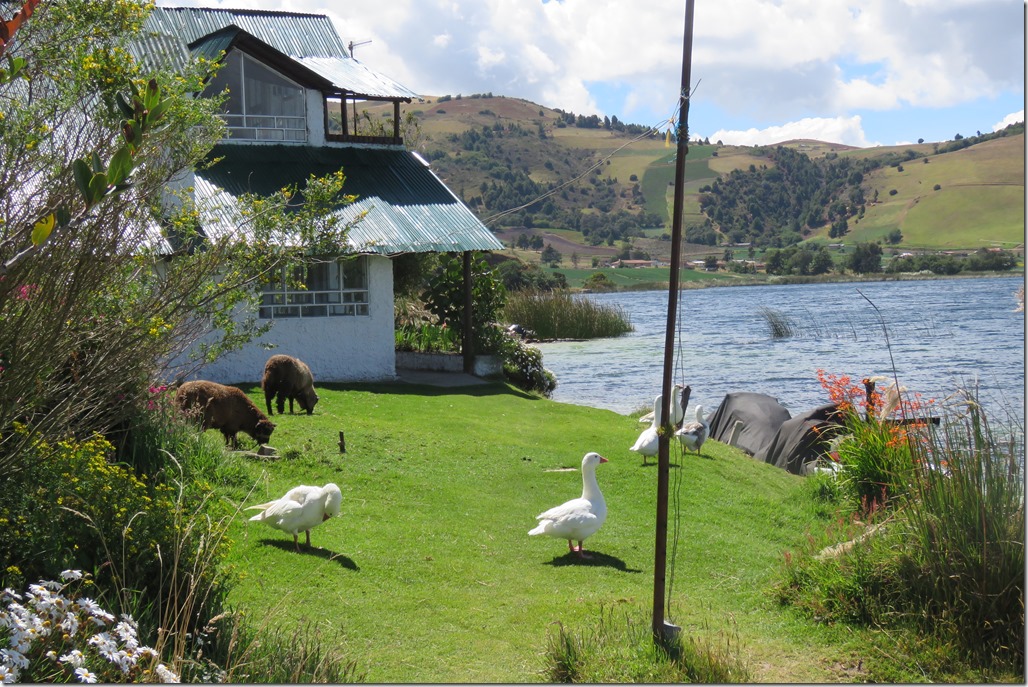 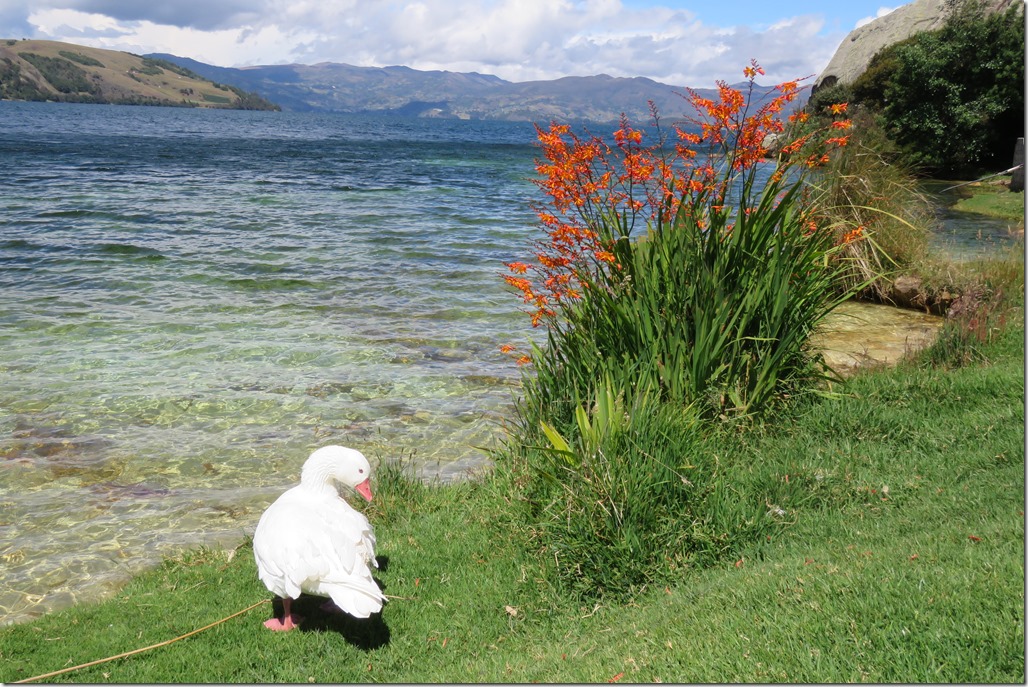 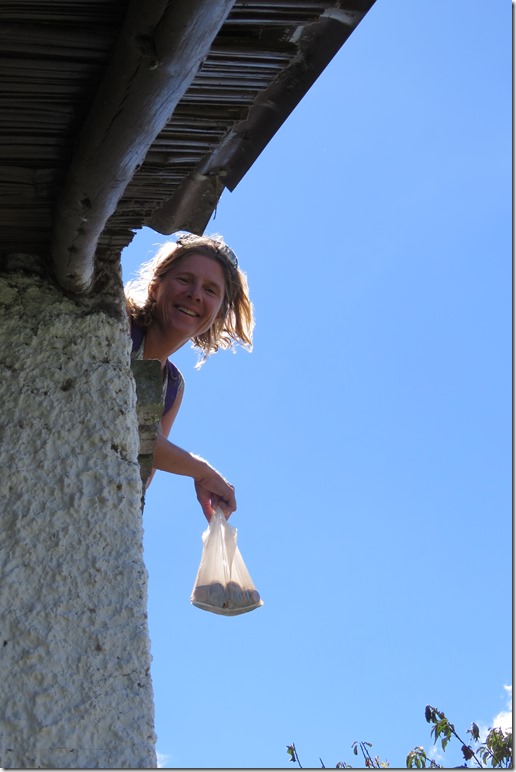 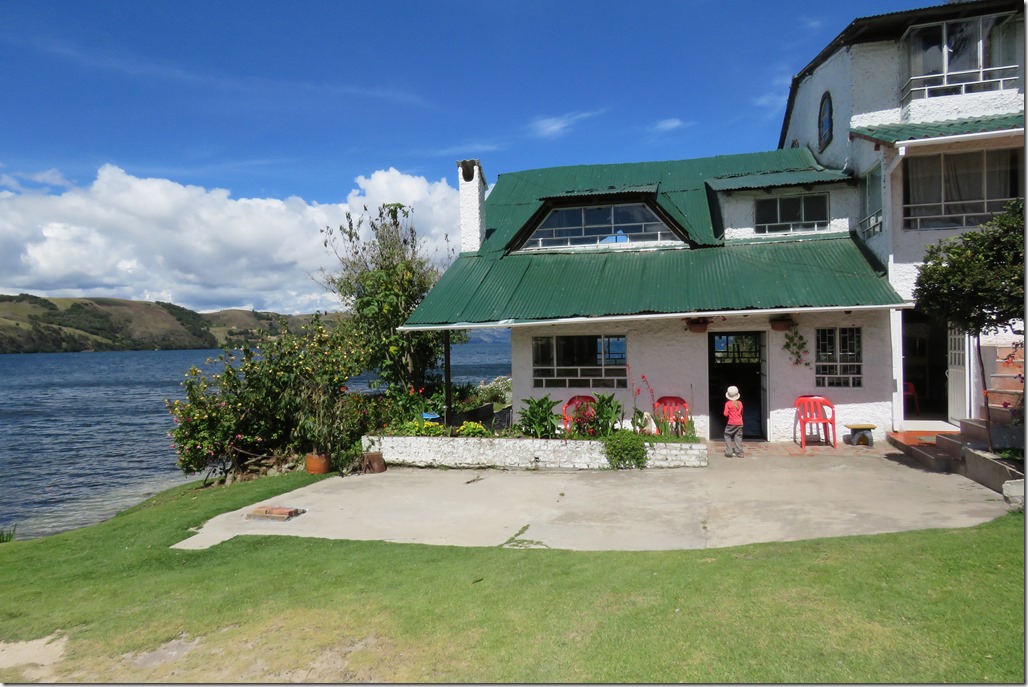 The restaurant was pretty big with inside sitting area and a cosy roof terrace but we decided it was too nice an afternoon to eat indoors so we asked them to make us a table outside and so we could enjoy a relaxed lunch by the lake. We had the place for ourselves. 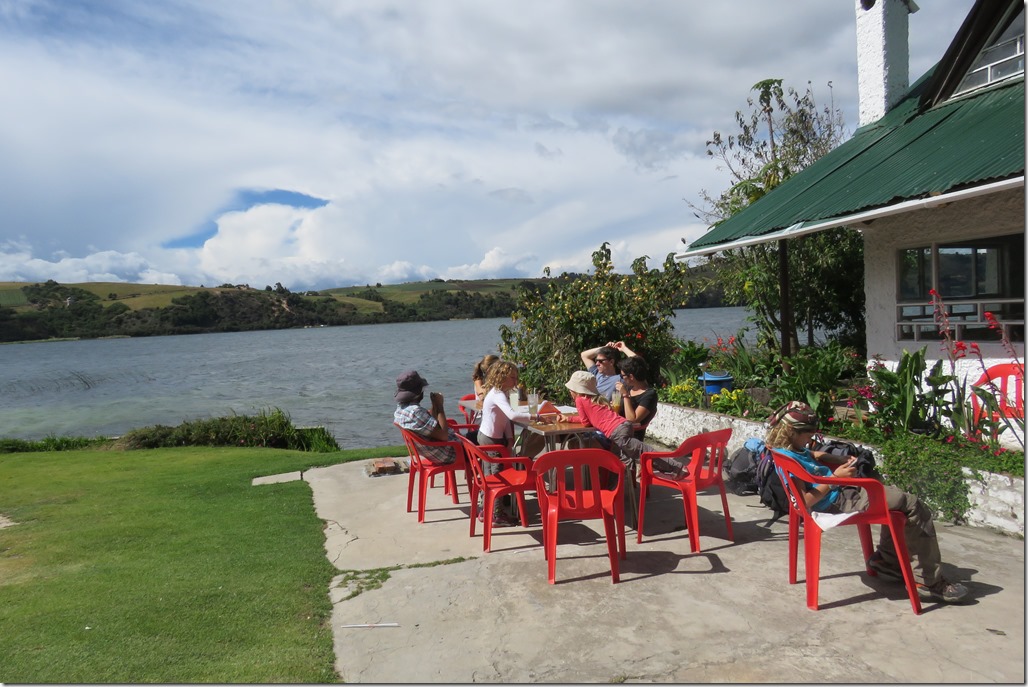 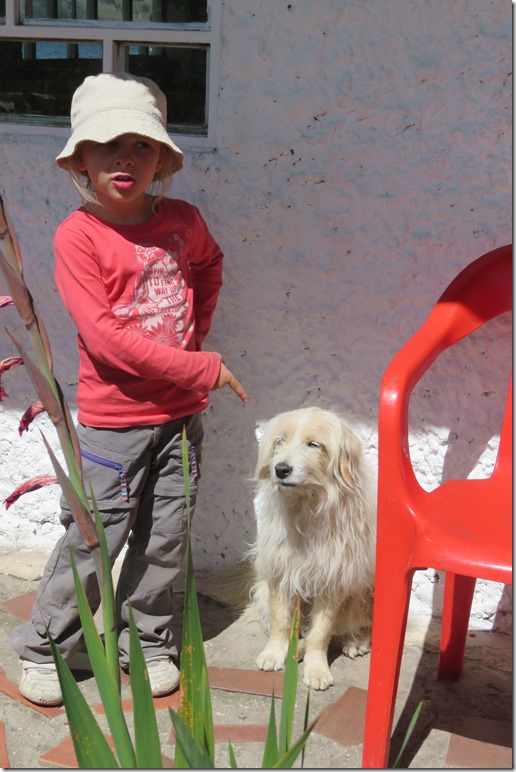 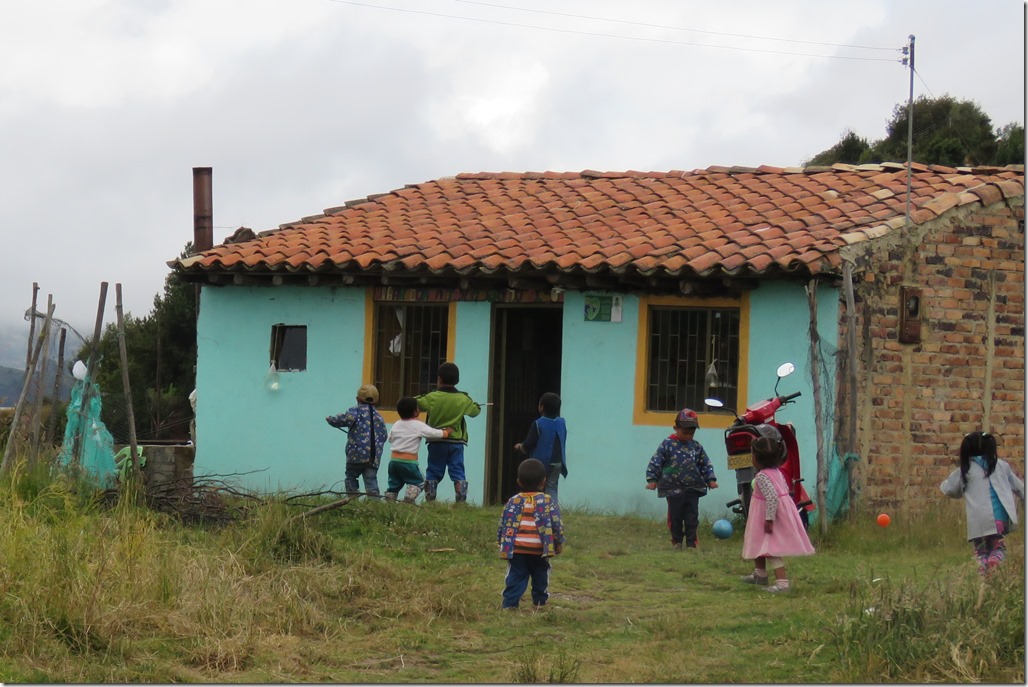 We went back to the main road and and started walking in anticipation for the bus. On the side of the road we saw some very attractive sheep and further down the road we noticed this lady sitting next to two piles of wool – one black the other white. Virginie, like Virginie does best, approached the lady, started talking to her and asking questions. The woman on her side, a little shy in the beginning was very friendly and answered all our questions and even showed us how she is working with the wool. 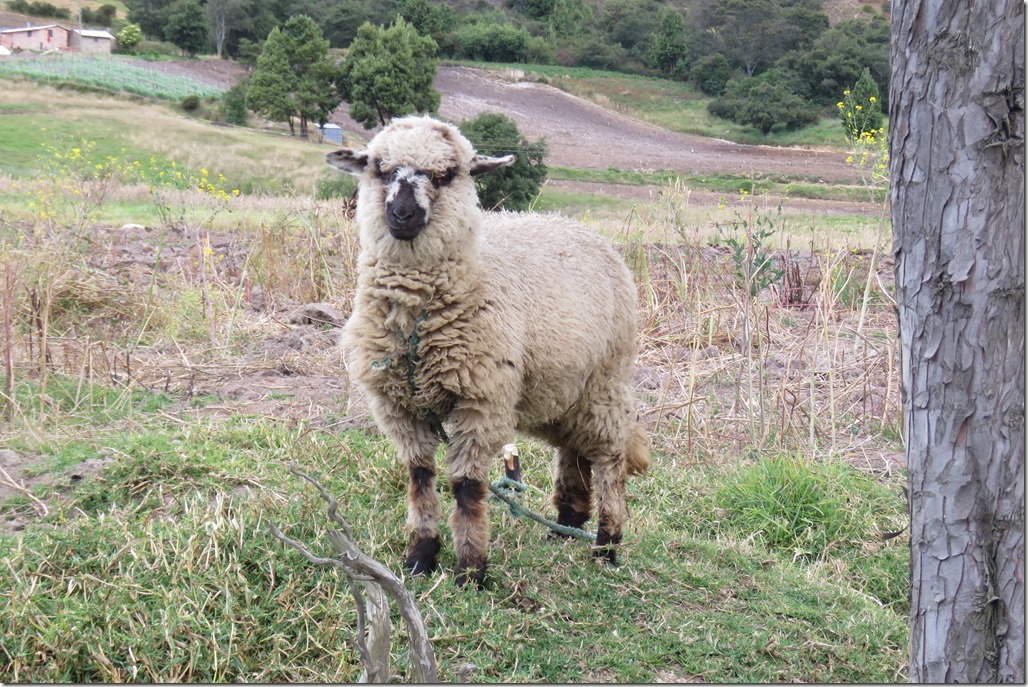 We later asked if she also does things with the wool she said that yes but the only thing she has left is one small hat. So to give something in return and also to have a nice souvenir Noa got a new wool hat. Knowing that soon she wont be able to use this hat once we are back in Santa Marta Noa did not separate from it, even wearing it while sleeping at night. 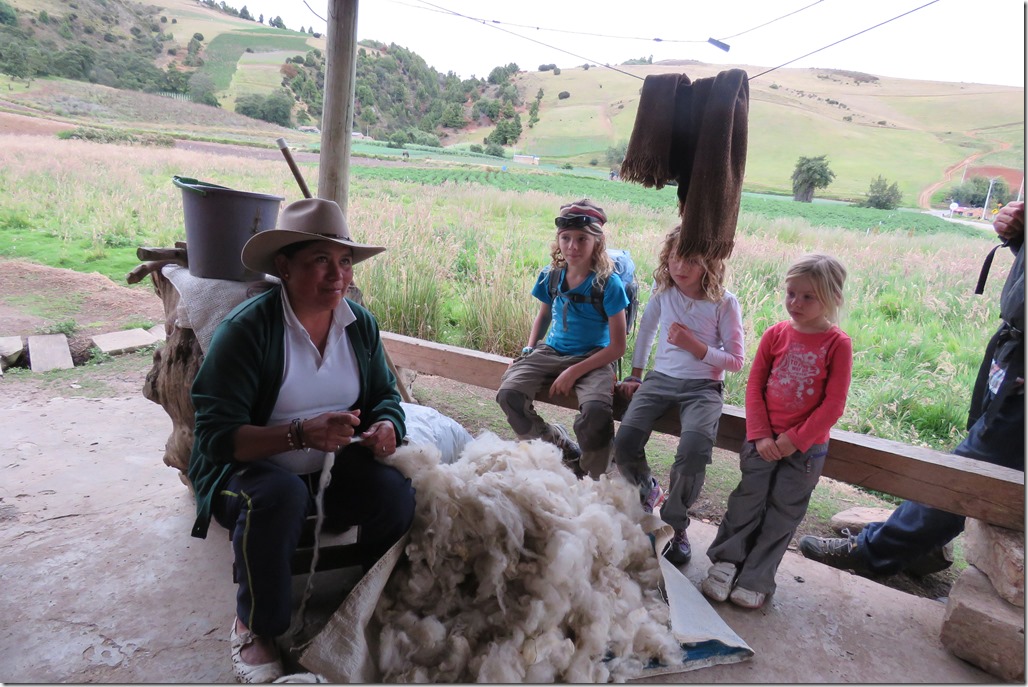 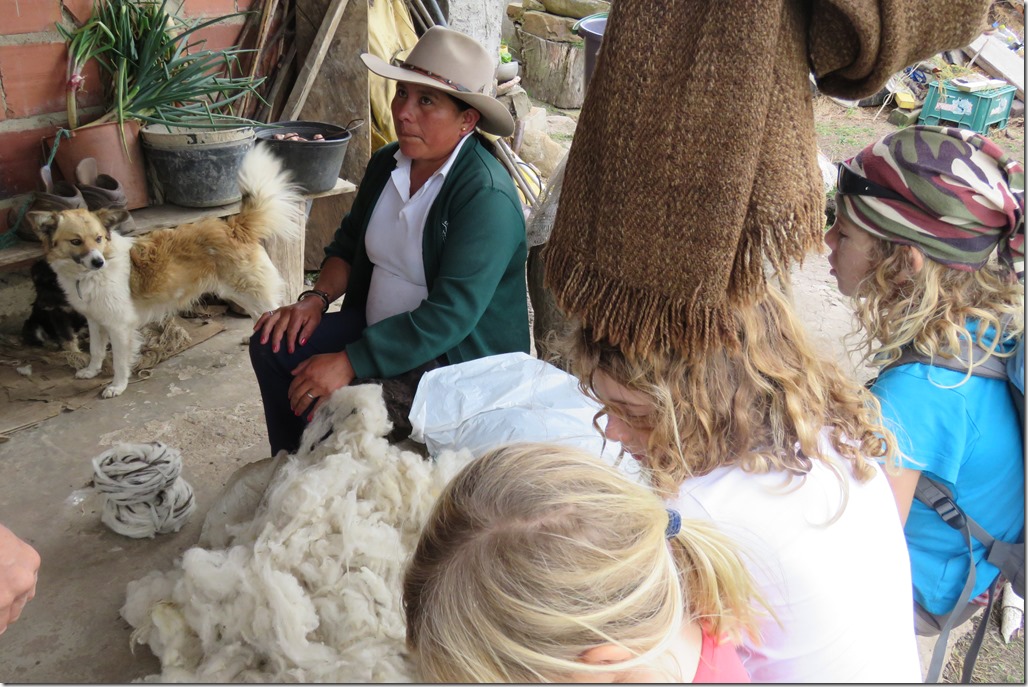 The woman demonstrated us how she turns the wool into strings by spinning this piece of wood.(Sorry I don’t have the necessary vocabulary for this sort of things) From what we understood the end result is a function of the speed she spinned that thing and how heavy it was. 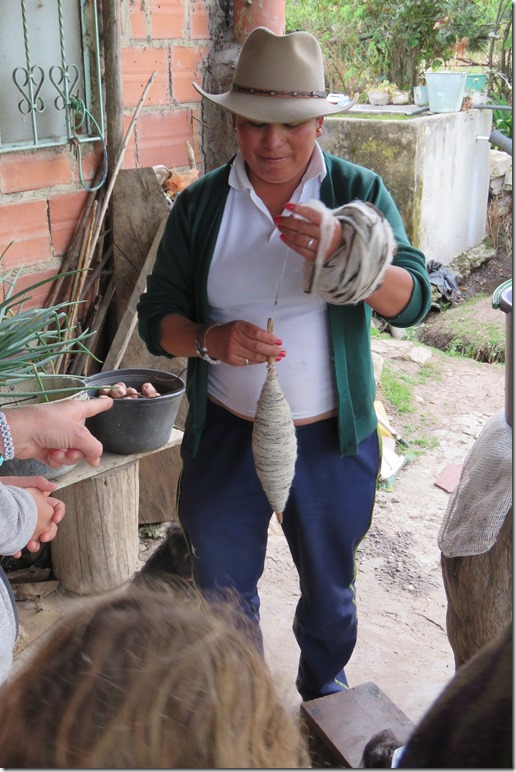 Noa and her new hat 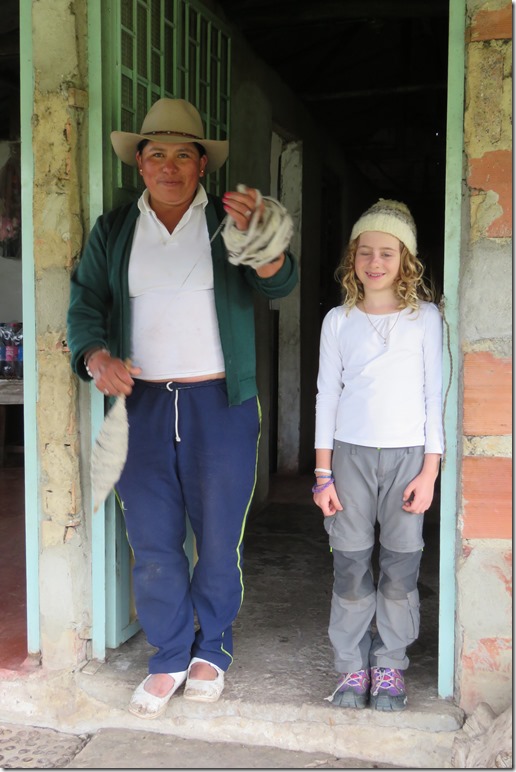 Colombia does not stop to amaze us with the diversity of its nature, its people and its culture.