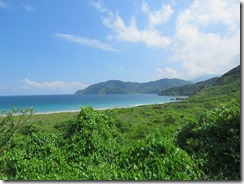 After being so long on the roads it was great to be back at the boat. We missed our little chez nous. But some things we did not miss, for example, the heat and the humidity of the marina. On some days it is not even 7 o’clock in the morning and we are already sweating and you can hear us complaining how hot it is. Its so hot you don’t feel like doing anything except sitting in the captain’s lounge or going to the bathrooms – the two places in the marina where you have air-conditioning. At anchor most of the time we have a little breeze and when it’s really too hot you simply jump in the water. Well, the water in the marina is another thing we did not miss. It is very dirty and polluted and after heavy rains, and it often rains heavily in Santa Marta (the usual afternoon thunderstorms is another thing we did not miss), it gets even worse with garbage and plastic floating all around. And the water is so hot it wont even be refreshing to jump in.

And last thing we did not miss is the lack of privacy. We are sitting in a slip with boats all around us, on the sides, in front, behind. We want to have a bay to ourselves. To have a break from the heat, to be able to swim again in clear water, to have some privacy. 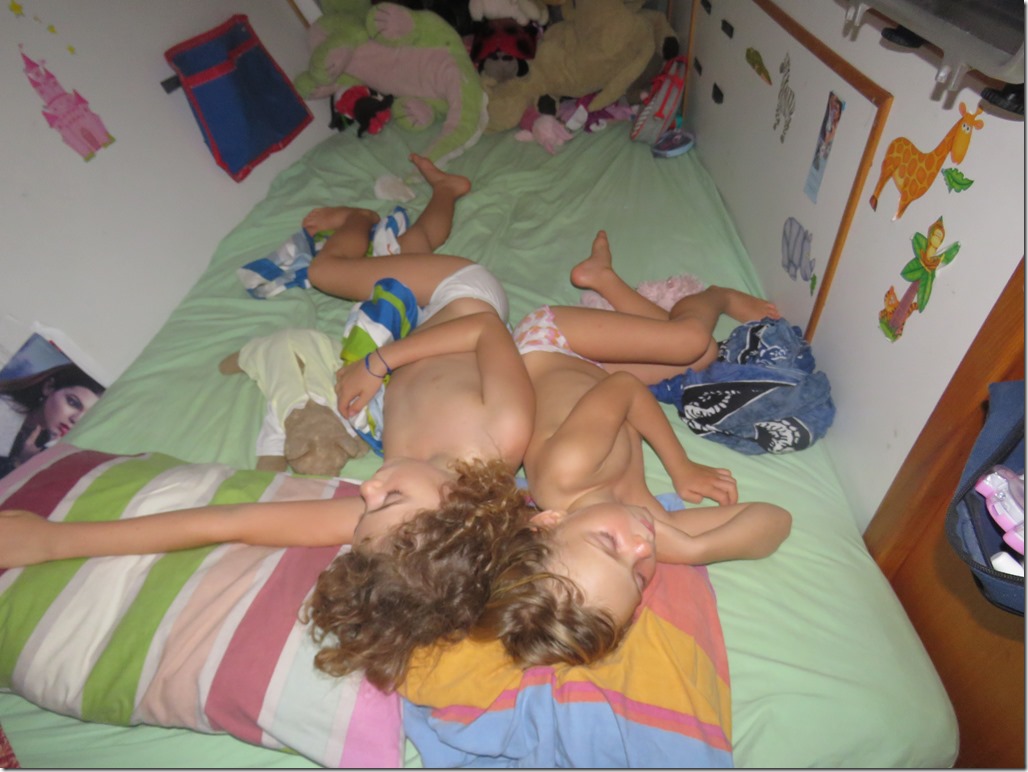 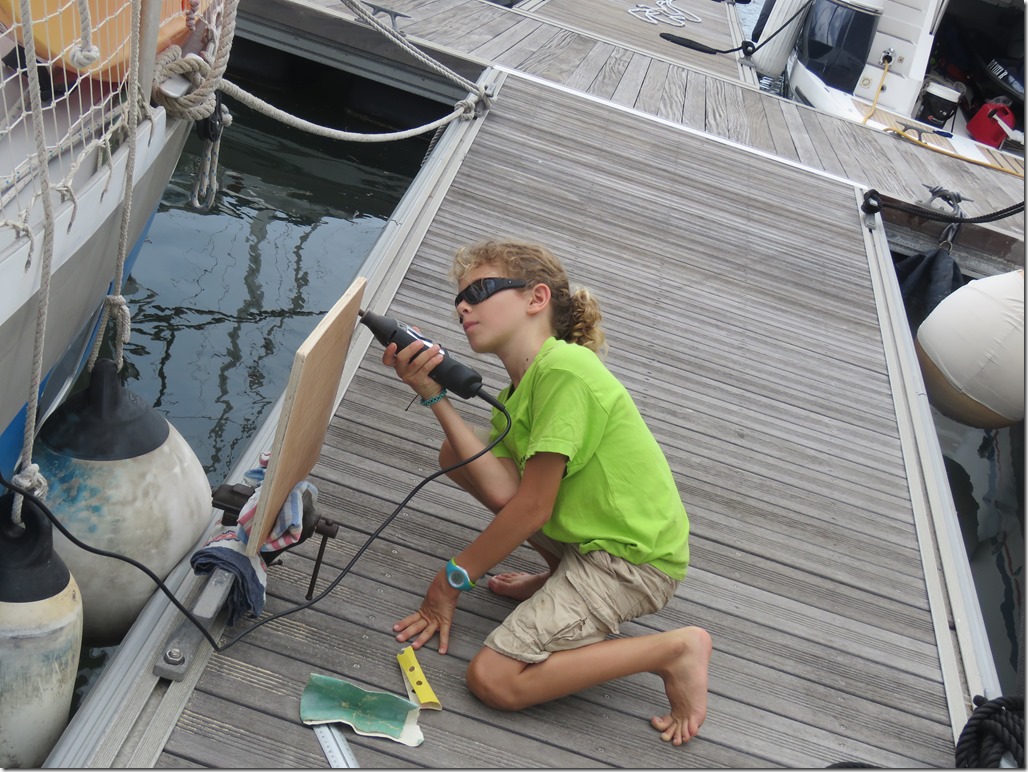 Luckily only 3 hours sail from here is a place called 5 bays – it is part of the Tayrona National Park – a very popular park with both local tourists and backpackers. But there wasn’t big risk of not finding a quite spot as not many visitors come from the sea.. So we were sure to find a bay for ourselves. And as Kattami joined us with their catamaran for this little excursion we were sure to find all we needed plus some great company for ourselves and the kids. 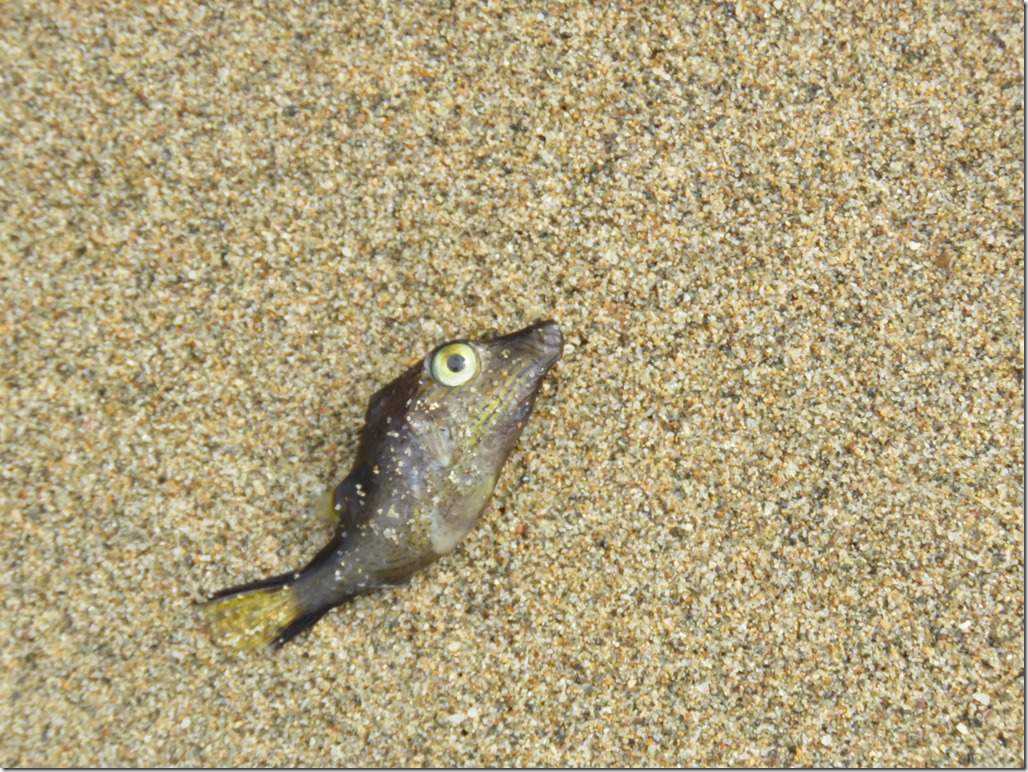 There were plenty of these dead fishes both on the surface of the water and on the beach. A local fisherman told us its because at this time of the year a warm current enters the bay, bleaches the reef and also kills these fishes. I don’t know the real reason.

The 5 bays are to the north-east of Santa Marta so to get there we had to sail against the trade winds which for the main part blow from the east. We chose a day with forecast of very light winds and left early in the morning because the winds usually picks up in the afternoon. We still had lots of wind and pretty big seas. The sailing was quite rough with waves washing our deck and the cockpit but knowing that it is only for 3 or 4 hours made the experience much more enjoyable. And arriving at Ensenada Nenguange, the middle of the 5 bays, was well worth the effort. 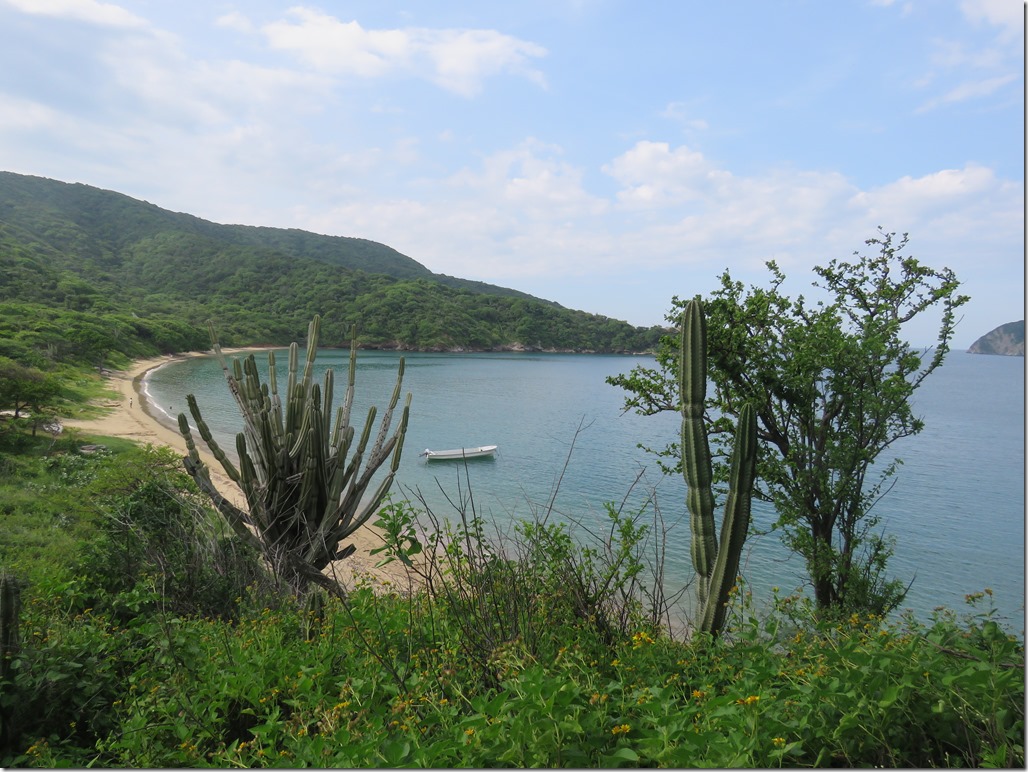 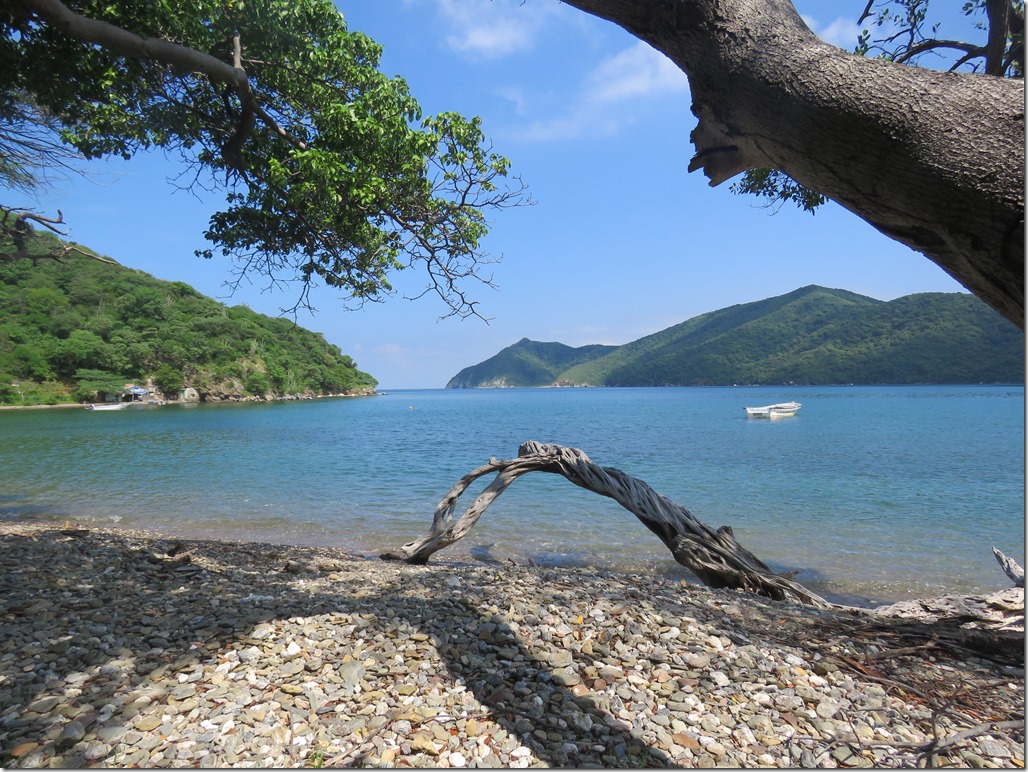 The rain forest was hugging the bay from all around, the high mountains of the Sierra Nevada in the background, a long and pleasant sandy beach with only a couple of fisherman’s huts and clear water. Finally we are back in our element. 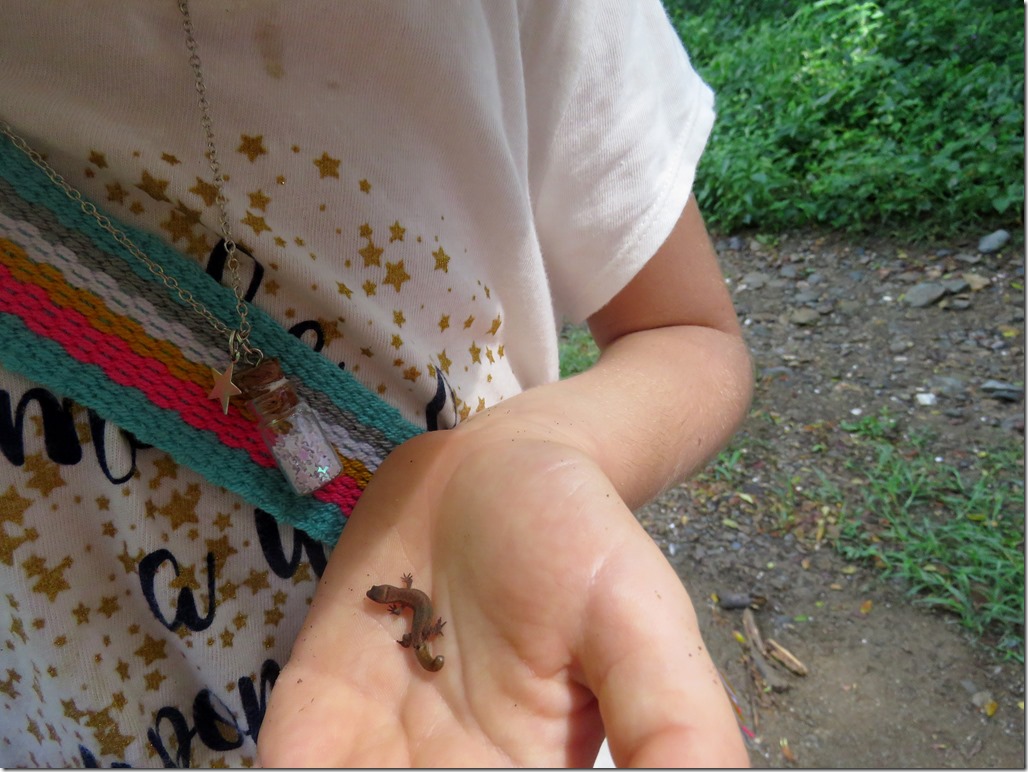 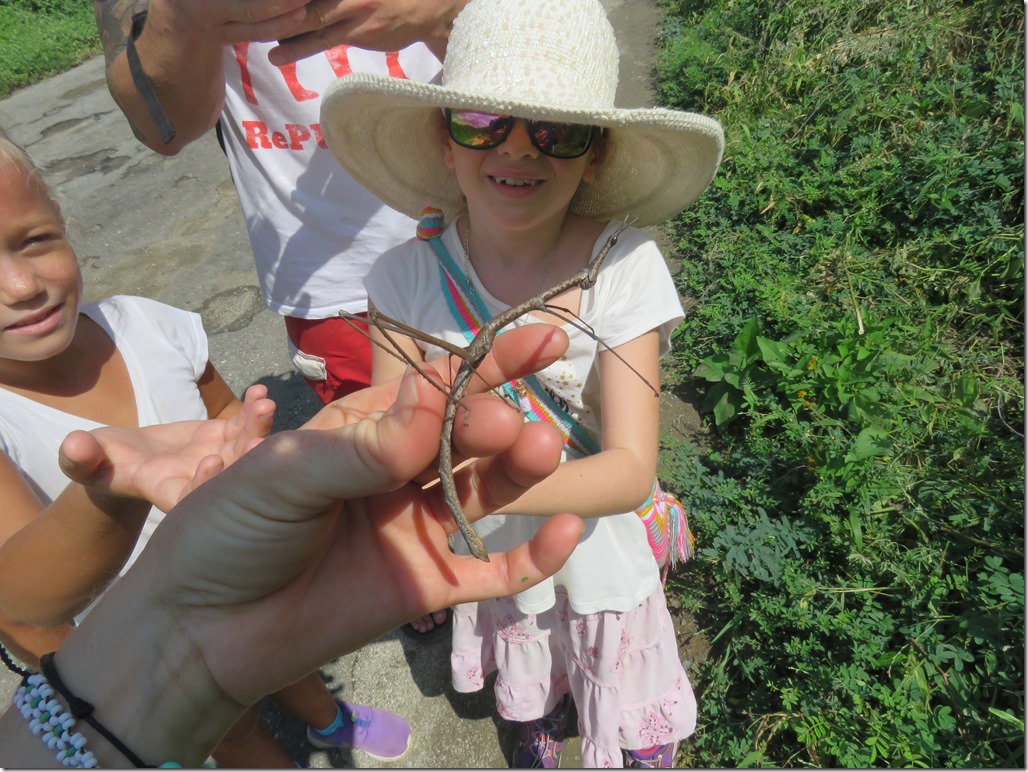 We dropped the anchor and first thing – everyone in the water. It’s the first time since two months that we went swimming in the sea, and wow, we missed it. a tour with the kayak, a walk through the lush forest above the hills to the next bay, a stroll on the beach, and to finish the day – dinner on Nomad together with Kattami. What else do you need in life? 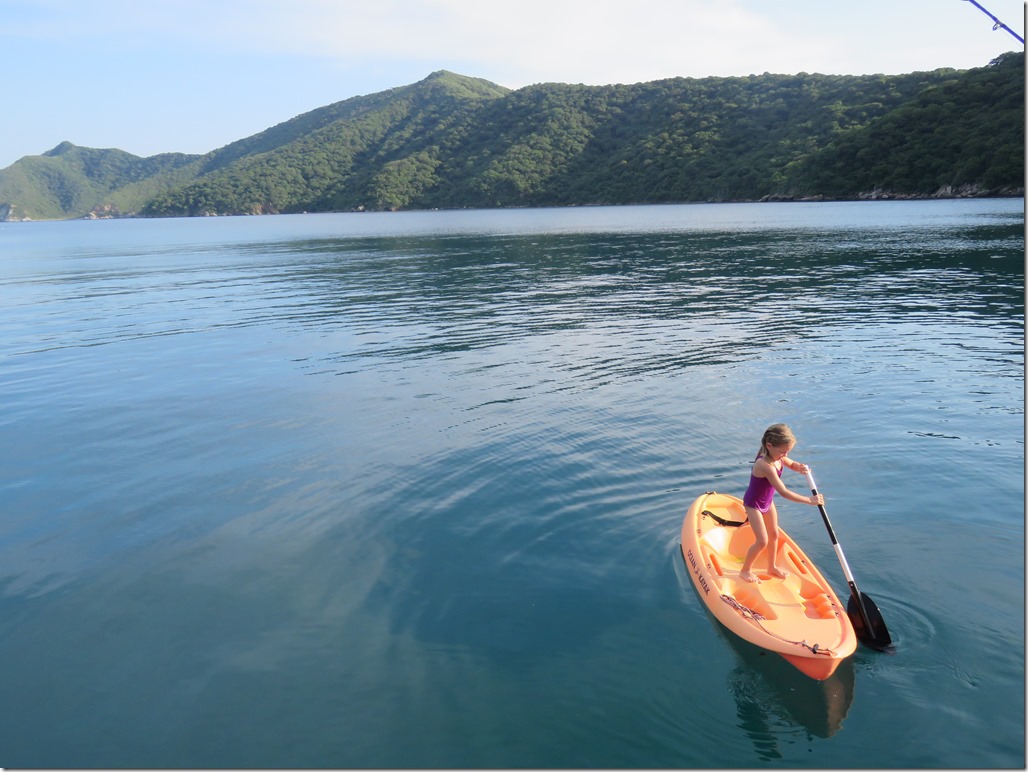 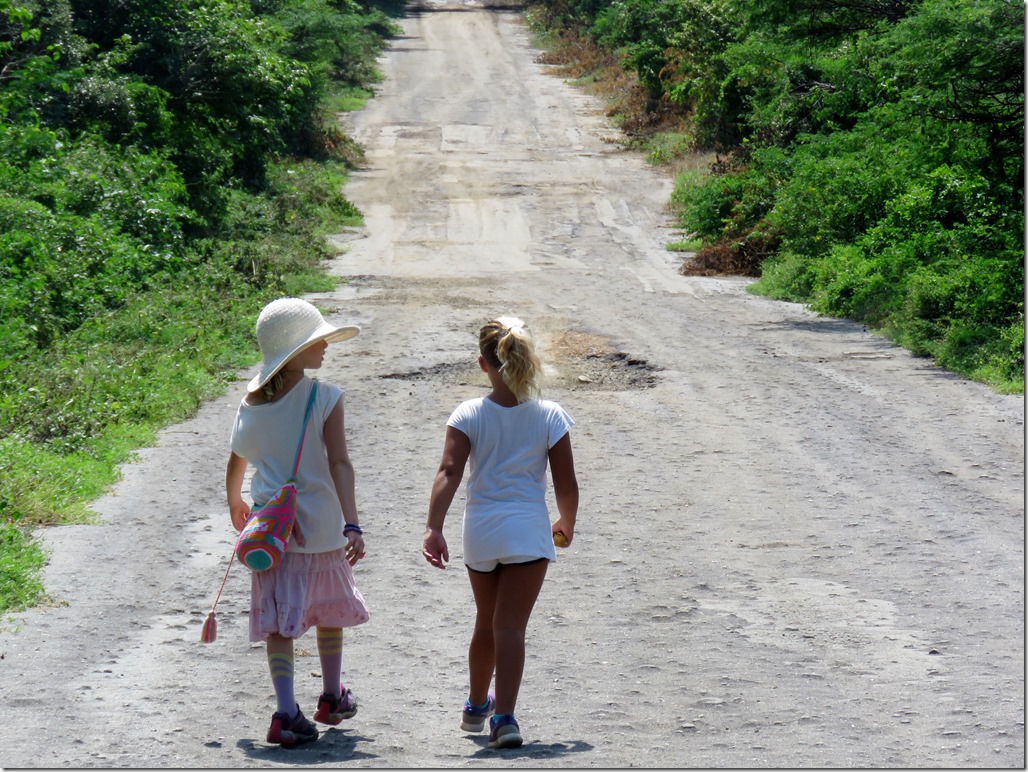 friends on a walk

In one of the huts on the beach we met Ronaldo, the cruisers friend. He lives in this bay since 10 years in this small green and leaky hut. Inside there is a hammock, a mosquito net, small cocking stove, a table, a couple of kitchen utensils, two photos of hits sons, a couple of books and not much else. His hut is right on the beach next to a dead tree where, since 10 years, cruisers who come to this bay looking for a place to tie their dinghy end up at Ronaldo’s place. He showed us proudly his boat-card collection. most cruising boats (we don’t) have a business card of their boat and he collects them. He had the cards of a couple of boat friends of ours, and other I knew through internet blogs. He was very happy and proud to show us around his bay and house,  talking about the history of his family but especially about all the cruising boats he met and knew. They were all his friends. Through the quick visits of these voyaging sailboats he went voyaging himself. We promised we will make a boat card for him. 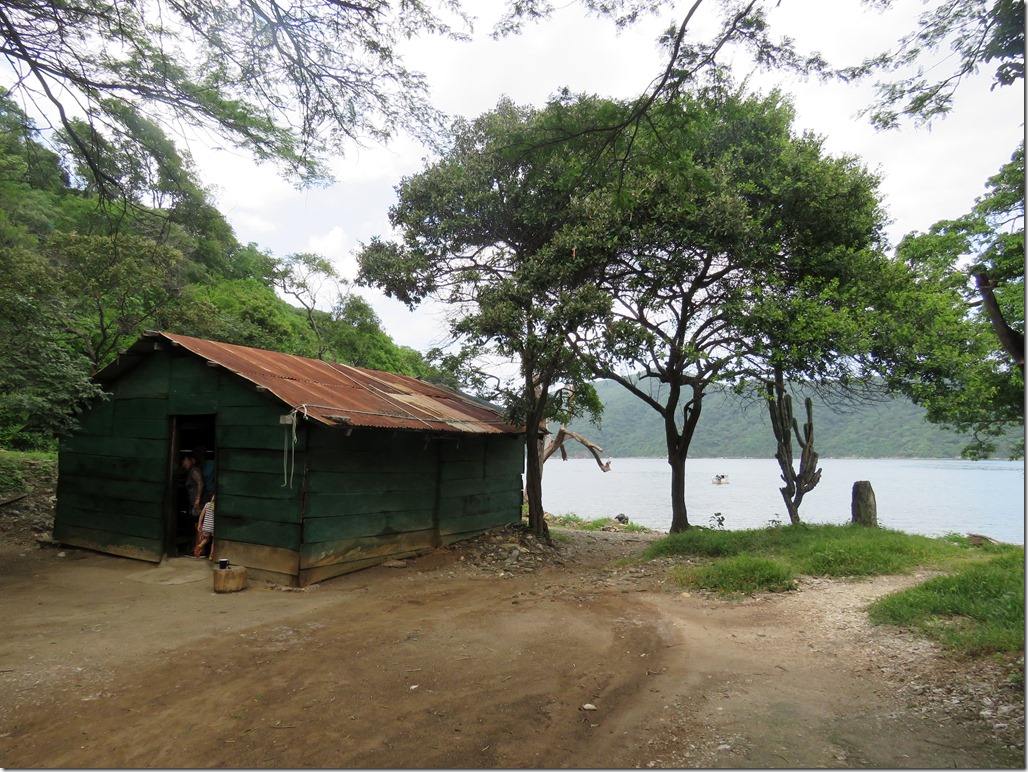 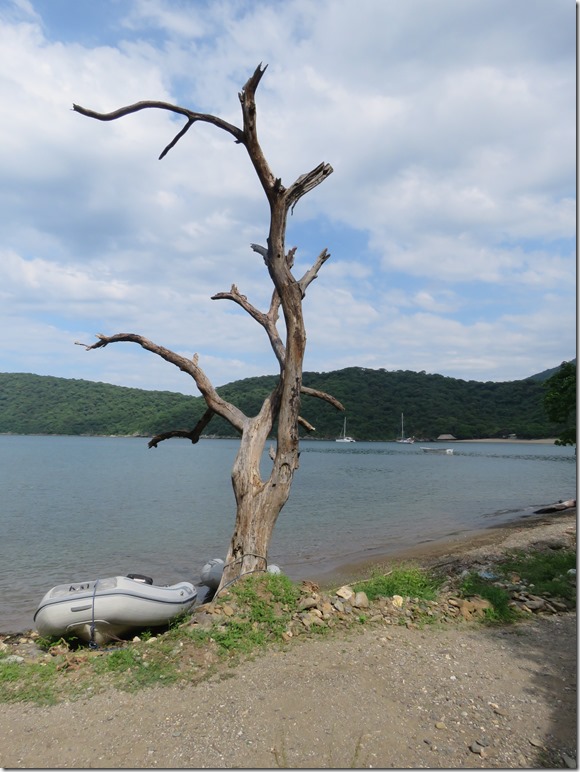 The dead tree next to his hut. Nomad and Kattami in the bay 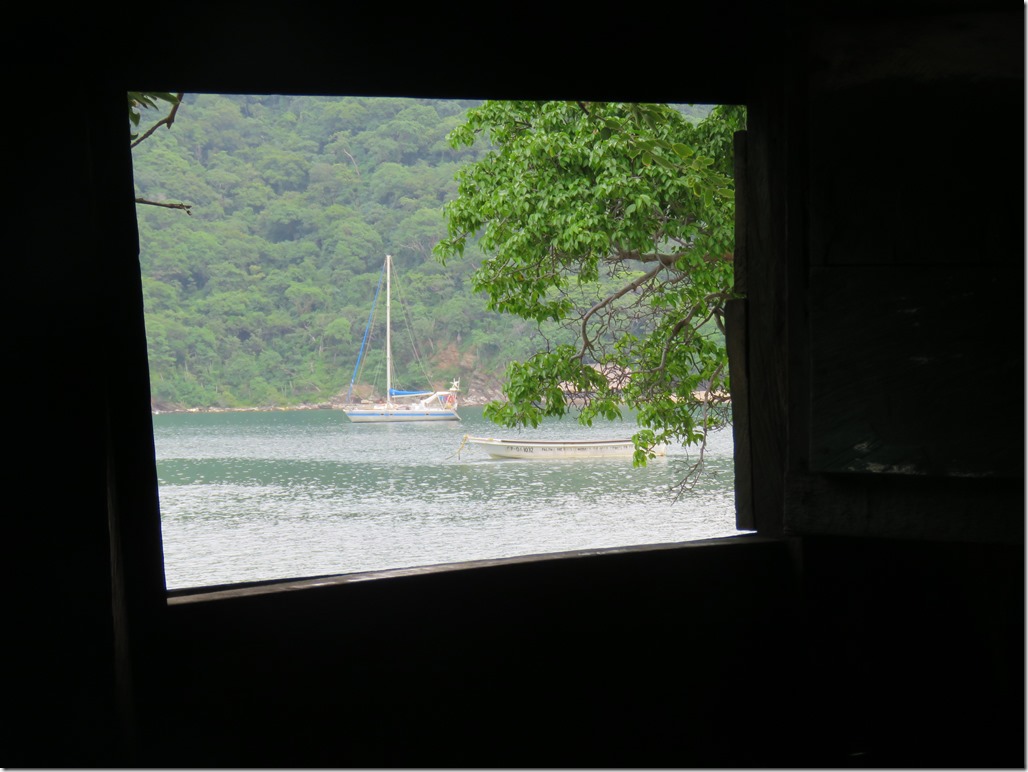 One thing we did not get way was the thunderstorms. At nights it was a real show to sit in the cockpit and see those lightnings all around. The night becoming day for a brief moment, than dark again. As the lightnings came closer we closed the hatches and went inside, than the rain and wind came. All this time we  were thing about little Ronaldo in his leaking hut, inside his little hammock with only candle light and every night these storms around him – the lightnings, the thunders, the rain. 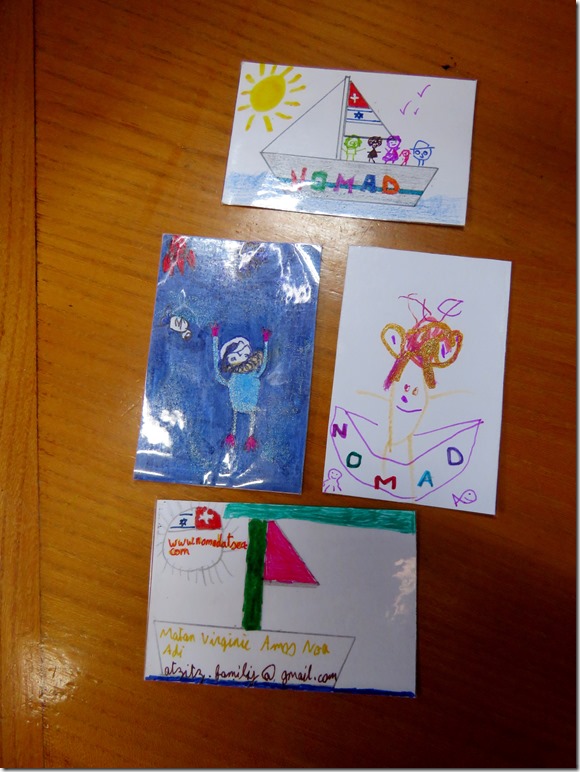 The boat cards the kids made. The bottom one is from Amos, the one on the left, Noa, on the right Adi and the top one Virginie drew the boat and each one of us drew himself and this is the card we gave to Ronaldo. 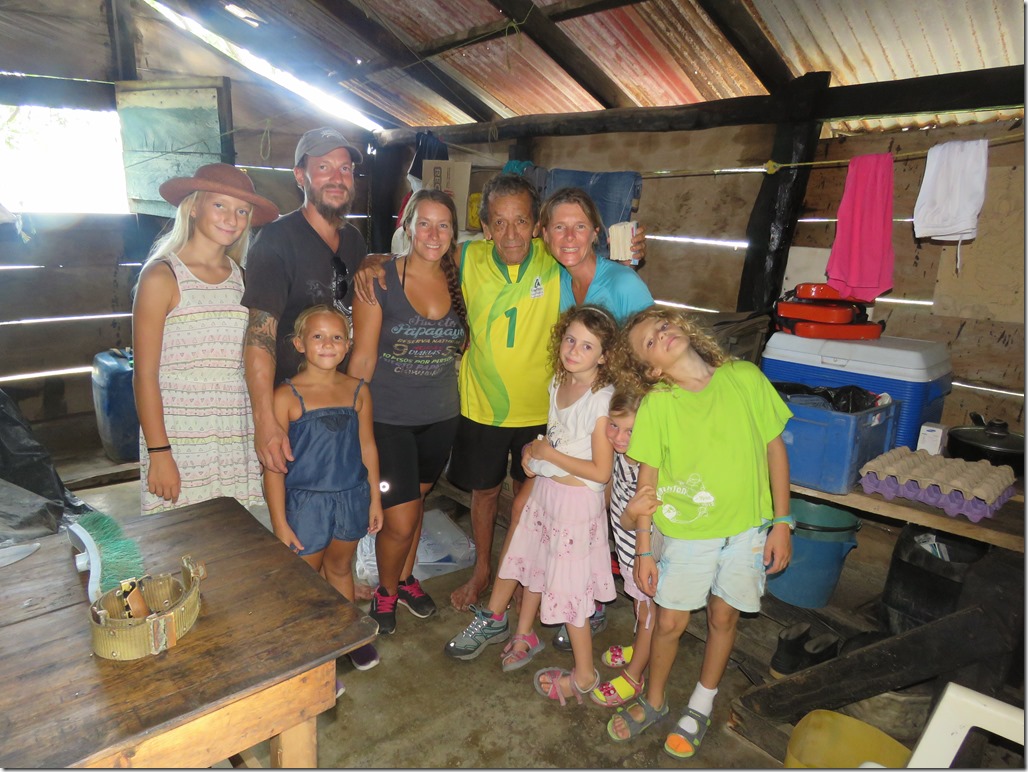 A group picture with Kattami and Ronaldo. You can see his collection of boat cards he is holding in his hand

Before we left the bay we went to say goodbye to our new friend Ronaldo. By this time he learned all our names from the little boat card we made him.  Its his eyes that talked when we told him we came to say goodbye. We exchanged a warm hug and a big smile and went back to our Nomad with the dinghy. All along Ronaldo was watching us waving at us from the shore. Even as we were weighting anchor we could see him there, watching us. 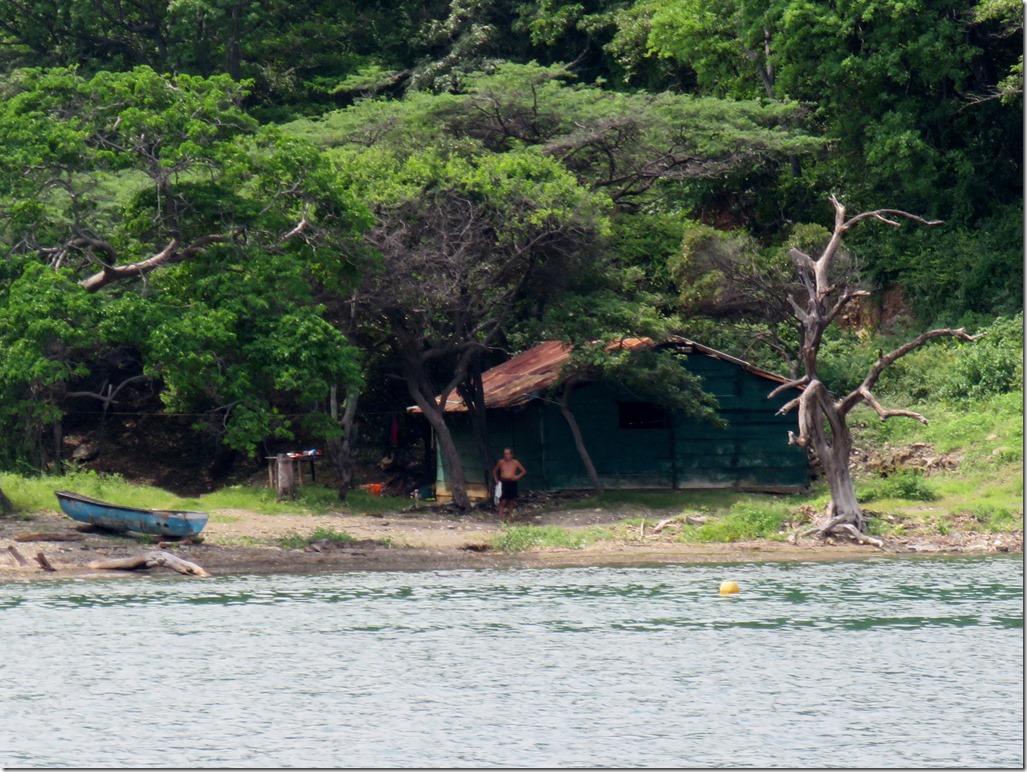 Ronaldo next to his hut